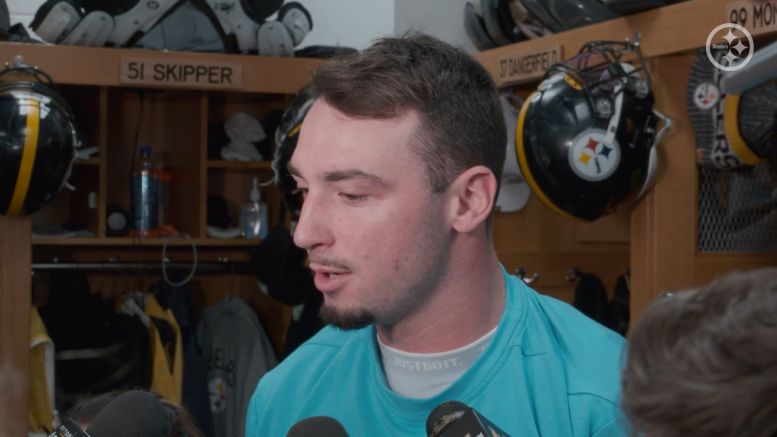 Nobody expects the Paxton inquisition. But that may be just what the Pittsburgh Steelers will get if they continue to get sub-par play out of rookie quarterback Devlin Hodges. With Mason Rudolph expected to be sidelined with a shoulder injury, Paxton Lynch will now, and for the second time this season, dress as the number two quarterback and be one snap away from playing.

And it’s merely the final game of the year, the one that ultimately decides whether they have a postseason game to play or not (also pending the results of other games). Lynch, a former first-round pick who has fallen well short of such expectations, is prepared for the moment.

“I feel good” within the offense, he told reporters yesterday in an usual sight for him, mobbed by reporters. “Whatever they need me to do, I’ll be ready to go. That’s why they brought me here, to help this team win if I was called upon, so that’s what I’m gonna be ready for”.

The Steelers originally signed Lynch after Ben Roethlisberger was placed on the Reserve/Injured List and Hodges was subsequently moved to the 53-man roster to serve as Rudolph’s backup. After a couple of weeks on the practice squad, he was promoted to the 53-man roster himself. He has since run the scout team.

“It’s a little harder when you haven’t gotten your reps in the offense, but like I said, we’re all professionals, so we’re all here to do our job, and that’s my job”, he said of getting those scout team reps and whatever else he can manage.

“I’ve been preparing like I was gonna play each week, knowing that I was usually inactive each week”, Lynch said. “But there was a few weeks that I didn’t know if I was gonna get bumped up or not, so I’ve just been preparing week in and week out to play”.

Lynch has been inactive most weeks, but there was one game in Week Six in which he had to dress. That was the game after Rudolph suffered a concussion. Hodges made his first career start against the Los Angeles Chargers.

At that time, quite frankly, nobody knew what he would look like, but they trusted him enough to give him the opportunity, in what probably was looking like a lost season anyway. But he performed well enough that Lynch never sniffed the field.

“Even though there’s been weeks where I didn’t know if I was gonna play or not, I’ve been preparing like I was gonna play”, the veteran reiterated. “I know there was a week in [Los Angeles] where I got bumped up and I was one play away from playing, so that’s been my mindset since I got here, is preparing to get up to speed as fast as I could if my number’s called upon”.