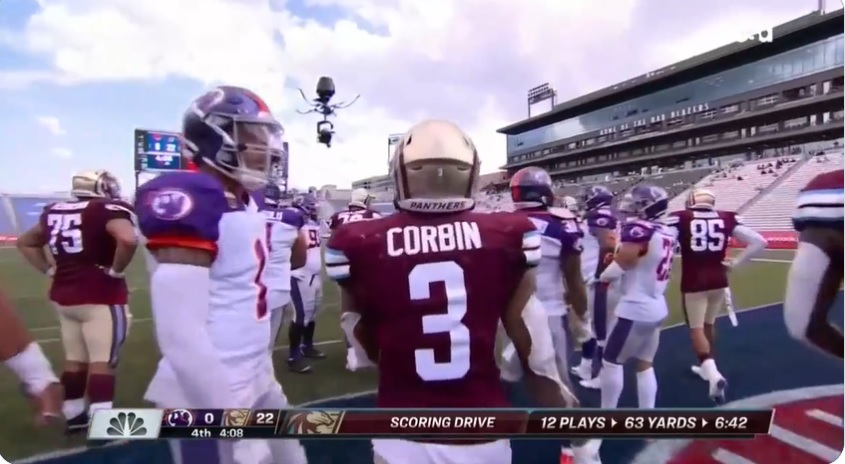 The winless Pittsburgh Maulers were in action on Sunday afternoon, taking on the winless Michigan Panthers at Protective Stadium in Birmingham, Ala. It was the Panthers earning their first win, knocking off the Maulers in convincing fashion, 24-0.

Michigan got the ball first and put together a nine-play, 63-yard drive that was capped off by a six-yard touchdown run by RB Stevie Scott III. QB Paxton Lynch, a former Pittsburgh Steelers QB, scrambled for the two-point conversion, and Michigan went up 8-0. The Maulers punted away their first drive, and then Michigan went three-and-out. However, WR Jeffrey Thomas muffed the punt and Michigan took over on the Pittsburgh five-yard line. After two running plays, Lynch scrambled for a touchdown, and RB Cameron Scarlett punched in the two-point conversion to take a 16-0 lead.

The Maulers’ next drive got off to a nice start when RB Madre London ran for 32 yards on the first play of the drive. A chop block penalty against Pittsburgh two plays later cost them 15 yards, and they attempted a 57-yard field goal, but Ramiz Ahmed’s kick fell short. Pittsburgh was struggling to get anything going offensively, but they were able to pick up some chunk yardage on a couple receptions and moved the ball to the Michigan 28. Ahmed’s 46-yard field goal attempt was blocked however, and the Panthers took over. Lynch suffered an injury and was replaced by QB Shea Patterson on the drive, but it led to a turnover on downs in Pittsburgh territory after his pass on fourth-and-nine was incomplete, intended for WR Joe Walker. Michigan seemed prime to score to end the half, but with no timeouts they ran the ball on two straight plays and failed to spike it in time, and Michigan took a 16-0 lead into the half.

The Maulers gained 17 yards on their opening drive of the second half but punted away after getting just one first down. Michigan then went three-and-out, and then the Maulers got it into Michigan territory but settled for a 59-yard field goal attempt on fourth-and-eight, but Ahmed’s kick was no good. The Panthers attempted to punt after not picking up a first down, but the punt was blocked by DE Carlo Kemp and Pittsburgh took over at the Michigan 28. On third-and-one from the Pittsburgh 19, RB Garrett Groshek was stopped for no gain. Groshek was then stuffed on fourth down and the Maulers turned it over. Michigan couldn’t capitalize though, as they went three-and-out again. The Maulers again had a solid opportunity to score, moving to the Michigan 15, but on fourth and three, QB Josh Love’s pass was incomplete and the Panthers took over. A first down run by Reggie Corbin went for 11 yards and a first down, but they only gained one more yard the rest of the drive and punted.

Pittsburgh was forced to punt on their next drive, and then Michigan sealed the game with a 12-play, 63-yard drive that resulted in a four-yard Corbin touchdown run. The Panthers got their third two-point conversion of the game with a two-yard run by Patterson. Michigan took a 24-0 lead with a little over four minutes to go in the game. Pittsburgh went three-and-out and punted away, and the Panthers got a 63-yard run out of Corbin before kneeling out the clock to seal the 24-0 win.

Pittsburgh will look to get their first win of the season next Saturday at 2:30 p.m. against the New Jersey Generals.