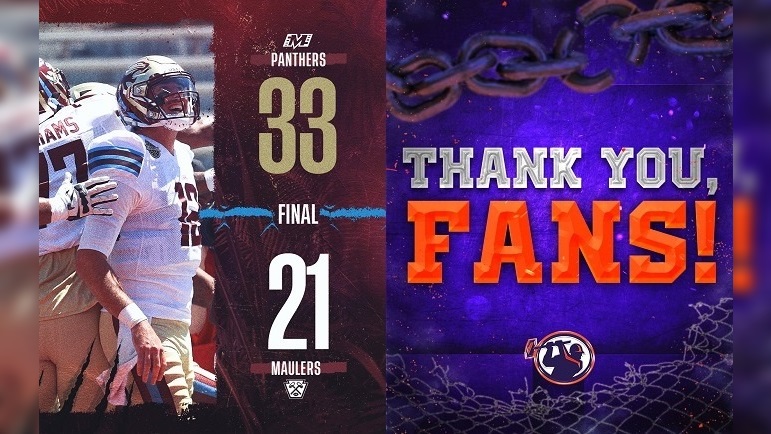 There was a lot on the line for the 1-8 Pittsburgh Maulers and the 1-8 Michigan Panthers when they took the field on Sunday afternoon. In order to discourage tanking, the USFL ruled that the winner of the season finale would get the first overall pick in the 2023 USFL Draft. Ultimately, it would be the Panthers who earned the right to select first, beating Pittsburgh by a score of 33-21 at Legion Field in Birmingham, Ala.

The Maulers opened the game with possession, and QB Vad Lee was under center. Lee took snaps in the first and fourth quarter, while QB Roland Rivers handled QB duties in the second and third quarter. Lee completed his first pass to WR DelVon Hardaway for a first down on the first play of the game, but two straight incompletions brought up third-and-ten. A QB draw on third-and-ten went nowhere and the Maulers were forced to punt. P Max Duffy booted it 49 yards and it went out of bounds at the Michigan five-yard line, so the Panthers would have a lot of work to do to get in scoring territory.

On second-and-eight, QB Paxton Lynch found TE Marcus Baugh for a gain of 11 yards and a first down. A third-and-one run was stuffed and the Panthers had to punt, but WR Isiah Hennie fumbled on the punt return and Michigan recovered at the Pittsburgh 22. An encroachment against Pittsburgh gave the Panthers another five yards and a first-and-five from Pittsburgh’s 17. RB Reggie Corbin ran for a first down on 2nd and 2, and then picked up eight yards on a first down run to move down to the Pittsburgh three-yard line. On third-and-three from the five-yard line, Lynch threw a dart to WR Ishmael Hyman who made an impressive grab over the Maulers corner for a touchdown. The extra point was good, and the Panthers took a 7-0 lead with 6:59 left in the first quarter.

WR Tre Walker returned the kickoff to the Pittsburgh 40, and the Maulers got a first down into Michigan territory on a seven-yard run by RB James Gilbert. On fourth-and-one, the Maulers went for it and coughed the ball up again, this time on a run by FB Mikey Daniel. and S Cory Rahman took the ball back 63 yards for a Panthers touchdown. The extra-point by K Cole Murphy gave the Panthers a 14-0 lead with 2:45 left in the first quarter.

Back-to-back completions by Lee moved the ball for a Maulers first down, but they wouldn’t get anything more. On third-and-seven, Lee was sacked and the second quarter opened with a Maulers punt. Things went from bad-to-worse for the Maulers, as Duffy’s punt that would’ve pinned Michigan on the one-yard line was called back due to ineligible players downfield. Duffy followed suit with another impressive punt though, and Michigan started their drive at their own six-yard line.

WR Ishmael Hyman picked up a first down a few plays into the drive to move Michigan to their own 27. On third-and-seven, Lynch threw a dump off to RB Stevie Scott and Scott took it 59 yards. A roughing the passer call against Pittsburgh gave the Panthers an additional six yards, and they were inside the Maulers ten-yard line. Two plays later, the Panthers were in the end zone on a three-yard touchdown reception by WR Lance Lenoir Jr. The extra-point was good, and the Panthers went up 21-0 with 11:05 left in the first half.

The Maulers next drive stalled out around midfield when a holding penalty brought the Maulers back ten yards on second-and-ten. They never recovered and punted away from the Michigan 48. Duffy gain pinned the Panthers inside the ten, this time at their eight-yard line. The Panthers went three-and-out, and Pittsburgh got the ball back at the Michigan 39 after Hennie returned the punt 11 yards. On third-and-six, WR Jalen McCleskey made a 14-yard reception on a pass from Rivers for a first down. On second-and-ten, the 6’3, 230 lb Rivers kept it himself for a seven-yard gain to make it third-and-three. A seven-yard completion to Walker gave the Maulers a first-and-goal. A penalty against McCleskey cost the Maulers 15-yards, and they had a second-and-goal from the Michigan 19. On third-and-goal from the Michigan 11, Hardaway gained six yards. The Maulers took the offense off the field and brought on K Ramiz Ahmed, who made a 23-yard field goal to cut the Michigan lead to 21-3 with 1:21 left in the second quarter.

A third-and-nine completion by Lynch to Hyman went for 15 yards and a first down to the Pittsburgh 40. With 20 seconds left in the half, the Panthers took their second timeout with a second-and-six from the Pittsburgh 36. On third down, Lynch threw a pick to LB Blaze Alldredge but the Maulers wouldn’t put points on the board and went into the half trailing 21-3.

The Lynch-Hyman connection came through again, as the WR picked up 27 yards on second down after a five-yard loss on first down by RB Reggie Corbin. However, on fourth-and-three the Panthers went for it from the Pittsburgh 37, but Lynch was sacked for a loss of eight. The Maulers couldn’t capitalize on the turnover on downs and punted after a three-and-out. On first-and-ten, Lynch aired it out and hit WR Joe Walker for 35 yards to bring Michigan to midfield. Two runs by Scott were enough to give the Panthers another first down. On third-and-one, Scott ran for 11 yards to the Pittsburgh 20 and gave Michigan a new set of downs. A defensive pass interference against Pittsburgh gave Michigan a first-and-goal, and Corbin got inside the one for second-and-goal. He was stuffed on second-and-goal for a loss of eight, and it set up a challenging third-and-goal from the nine for Michigan. Lynch was sacked by EDGE Carlo Kemp and the Panthers had to kick a field goal. A delay of game cost Michigan another five yards, which made Murphy’s attempt from 35 yards. He knocked it through and the Panthers took a 24-3 lead with 2:41 left in the third quarter.

Pittsburgh had a big play on second down, when Rivers connected with Hardaway for a 47-yard gain down to the Michigan 20. A 12-yard scramble by Rivers on second-and-seven gave Pittsburgh a first-and-goal. On the next play, he hit TE Matt Seybert for a touchdown.

Maulers for six!@roqb14 found a wiiiiiide open @mattseybert82 for the score 🙏

The Maulers then went for a three-point attempt to make it a 12 point game, but Rivers was incomplete, and Michigan held onto a 24-9 lead with 14:56 left in the game. Michigan went three-and-out, and Pittsburgh had the chance to make it a one-score game.

The Maulers drive started at the Michigan 38 after an unnecessary roughness call against the Panthers on the punt return. Vad Lee returned at QB, and picked up a first down on a nine-yard scramble on third-and-four. Gilbert picked up a first down on a short run after RB Madre London gained nine on first down, and the Maulers were in business at the Michigan 14. On the next play, Lee floated a pass to a wide-open Hennie in the end zone for a touchdown to make it 24-15 Pittsburgh.

There is some MAJOR fight in these Maulers today.@_VL2 drops a dime to @iwh_v as we pull within one score!

Instead of kicking the extra-point to make it an eight-point game, Pittsburgh went for two to make it a seven-point game but Lee was sacked and the attempt failed.

An 11-yard reception by Hyman was enough for a first down to the Michigan 41 on second-and-five. On third-and-four, Lynch threw it to Lenoir Jr. who picked up 15 yards on a catch-and-run. Another first down by Michigan brought the Panthers inside the Pittsburgh 20 after TE Ryan O’Malley gained 15 yards on a reception. A 14-yard reception by La’Michael Pettway put them at the Pittsburgh five-yard line, and after a receiving touchdown by Scott was overturned, the Panthers still found the end zone on the next play when Baugh caught a four-yard touchdown pass from Lynch. After Murphy’s extra-point, the Panthers took a 31-15 lead with 6:17 to go.

McCleskey gained 17-yards for a first down, before Lee hit WR Bailey Gaither for his first reception of the game, which also resulted in a first down. On the next play, Lee went down the left sideline to Hardaway who made a leaping grab for a gain of 26 yards to the Michigan 22. On third-and-ten, Hennie was wide open and he caught the pass from Lee and ran the final few yards into the end zone for a 23-yard score. Pittsburgh again went for two to make it a seven-point game, but the conversion was unsuccessful after Lee’s pass was incomplete. The score would be 30-21 Michigan with 3:39 left to play. Pittsburgh went for the 4th-and-12 try to earn possession back instead of the onside kick, and Lee’s pass was incomplete so Michigan got the ball back.

Michigan would run the ball three straight times and failed to pick up a first down. Murphy came out for a 44-yard field goal attempt and hit it, putting Michigan up 33-21 with 2:13 left to play.

Pittsburgh started their next drive from their 28, and on second-and-ten Lee and McCleskey hooked up for 27 yards to the Michigan 45. Three plays later, Lee was intercepted and the game was effectively over.

The Maulers’ dreadful season ended with a record of 1-9, good for worst in the USFL. Maybe they should’ve eaten more pizza.