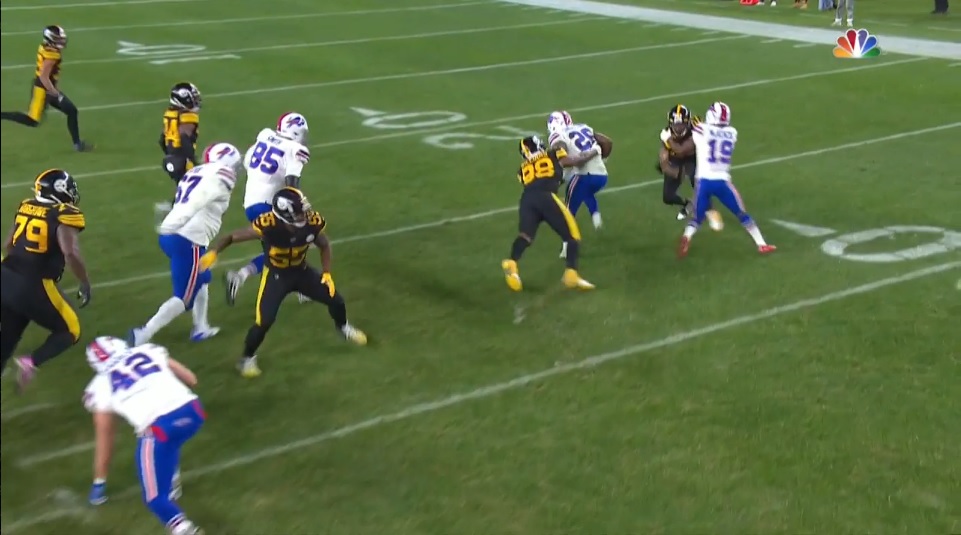 The loss still stings, but there’s plenty of positives to take away from Sunday night’s performance against the Buffalo Bills in primetime.

For starters, the defense was mostly lights-out again, carrying the Pittsburgh Steelers’ dreadful offense another week. Guys like Cam Heyward, Terrell Edmunds, Tyson Alualu and TJ Watt played some really good football once again, while Steven Nelson came up with his first interception of the season.

Overall though, the tackling wasn’t as bad as it seemed live, especially against Bills rookie running back Devin Singletary.

Based on the list above, three defensive backs, three linebackers and a defensive lineman missed tackles against the Bills. While the number of 8 appears high, it was a strong night for Pittsburgh overall in the tackling department.

However, two of those misses ended up being key ones, helping set up Buffalo touchdowns on the very next play.

Let’s dive into these misses.

Nelson has had a tremendous year since coming over from the Kansas City Chiefs in free agency. He’s developed into a lockdown cornerback opposite Joe Haden, and has really helped the secondary as a whole take a massive step forward.

Where he’s struggled this season though is in the tackling department. That reared its ugly head on Sunday again, thanks to some special running by Singletary.

This run by Singletary is one for the highlight reel. Unfortunately, it comes at the expense of Nelson, who whiffs badly in space after doing a good job of working off of a block down the field.

Nelson’s miss allows Singletary to work his way to the 1-yard line, leading to Josh Allen’s rushing touchdown to make it a 7-0 game.

Later in the first half, Devin Bush records his lone miss.

Bush does a very good job of staying square to the line, sifting through traffic in front of him and staying within his gap to get a clean shot on Singletary. However, Bush doesn’t finish the play, allowing Singletary to wiggle out of the tackle attempt.

Fortunately for Bush, Singletary doesn’t get any further as a host of Steelers arrive to clean up for Bush.

Much like Bush, Williams does a good job staying square, not overrunning his gap, and works off of a blocker to attempt the tackle. That said, Williams doesn’t bring his lower half, leaning to his right to try and use his upper body to wrangle Singletary.

The rookie running back has too much power in his compact frame for Williams to be trying that, which leads to a timely stiff-arm to the chest, resulting in Williams’ miss, allowing Singletary to pick up another 7-10 yards on the 15-yard run, setting up Tyler Kroft’s touchdown.

James Conner came back in a big, big way, leading the Steelers in the department, while Nick Vannett and Zach Gentry recorded their first forced misses of the season.

Vannett and Gentry aren’t known as factors after the catch, but Vannett was a force to be reckoned with after the catch, lowering his shoulder consistently to dish out punishment. Gentry did a great job stepping through a Tremaine Edmunds tackle attempt on a short third-down throw from Devlin Hodges to move the chains.

Speaking of Duck, he forced all three misses on sack attempts, stepping through an ankle tackle attempt by Shaq Lawson, outrunning an angle by Edmunds, and forcing Micah Hyde to miss coming in free off the edge.

Diontae Johnson and Conner flat-out dominated again, as you’ll see below, but I wanted to mention Kerrith Whyte Jr. He might not have the numbers in the return game, but he’s consistently forcing missed tackles when he can. His 16-yard kick return that he fielded at his own 15 resulted in two of his three forced misses. He’s a special athlete.

Hyde was completely undressed here by Conner. So much for the former Pitt running back not being elusive and unable to make a defender miss like, *checks notes*, Jaylen Samuels can.

Conner forced a miss early on his first run of the game, then forced another on his short swing pass into the right flat, spinning out of a tackle. He forced Jordan Phillips to miss on a screen pass gone wrong, and ran through an attempt by Taron Johnson in the right flat on his touchdown catch.

He’s a special back that – when healthy – is in the discussion for top 10 in the game. Problem is he can’t seem to stay healthy.

As for Johnson, he just needs to work on holding onto the ball because everything else is there.

First off, this is a terrific hole shot by Hodges. Good ball placement, and good timing to keep Johnson protected from the safety. After that, it’s all Johnson.

That’s a strong side-step of the first tackle attempt and then a mean stiff-arm to the chest of Tre’Davious White, but right after that stiff-arm he puts the ball on the ground. It’s one of those “yes, YES, NOOOOOO” plays. Fortunately, Tevin Jones was Johnny on the Spot to recover the football.