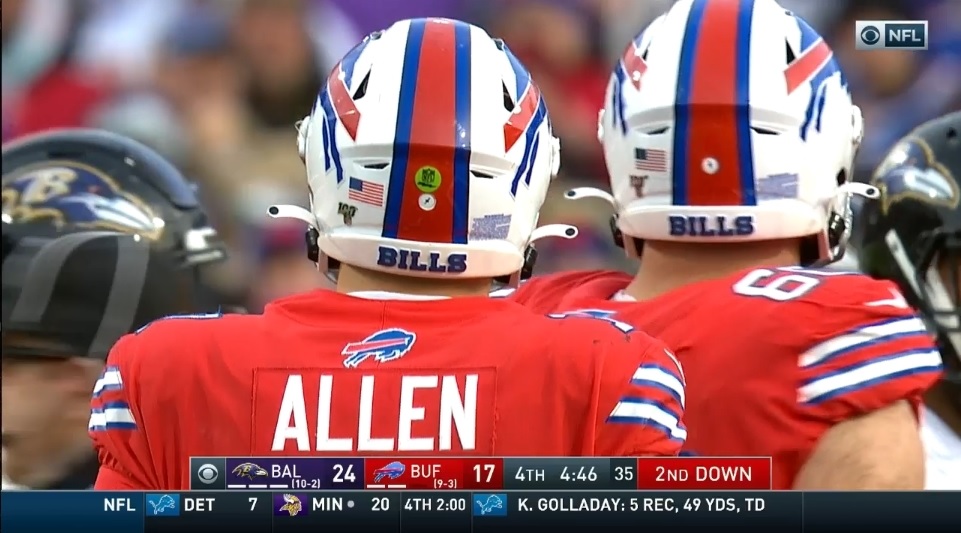 Over the final quarter of the season the Steelers will face the top three rushing QB’s in the NFL. Last week it was Kyler Murray who is ranked second with 448 yards.  They succeeded last week holding Murray to 2 yards rushing.  They finish out the season with Lamar Jackson who has already surpassed one thousand yards and should easily pass the NFL record for rushing yards by a QB. Before they get there they’ll have to face the biggest of the QB rushing leaders, Josh Allen.

Allen leads all QB’s with eight rushing touchdowns and that in part makes him and the Buffalo Bills very effective near the end zone.

Taking a look at Allen’s numbers shows that 19 of his 25 total touchdowns have come in the red zone with 11 coming through the air. Led by veteran Frank Gore and rookie Devin Singletary the Bills are currently the 5TH ranked rushing team in the NFL. The threat of those three running the ball gives the Bills lots of options in the red zone.

Buffalo ranks tenth in the league converting about 61% of their red zone opportunities into touchdowns. On the other side Pittsburgh is ninth in the league allowing approximately 51% to become touchdowns and as of late they’ve been even better. Over the last three games, that number drops to 37.5%.

As noted the Steelers did an impressive against Murray but doing the same vs the Bills will be a bigger task. Physically bigger. Allen is about 7 inches taller and 30 pounds heavier while still being fleet of foot. This gives Buffalo options running the ball.

The simplest, at least to some of us, is the quarterback sneak. At Allen’s size all he really needs to do is snap the ball and extend his arm.  Buffalo has used this for three of Allen’s rushing touchdown all obviously from the one yard line.

They get more creative a little farther out. In both of the following plays, they will use the alignment to create space for Allen to run.

QB Draw – At Cleveland, on 2nd and 8 from the 10 the Bills go empty and spread out the defense. This leaves just 5 defenders near the line of scrimmage and just 2 inside of the tackles.  Allen (17) is able to easily run up the middle for the touchdown.

Power Sweep – At the Giants, on 2nd and 5 from the 6 yard line they are in 11 personnel and line up all three WR’s to the left. Allen has Gore (20) to his right and TE Lee Smith (85) inline to the right.  They’ll pull the center and right guard with Gore out in front giving them three blockers for three defenders. Allen just needs to read the blocks and he scores easily.

Sell the run by pulling lineman and using the play action fake to get the defense thinking run and hit the open receiver. Maybe the Steelers should try it more considering they are dead last with about a 34% TD rate in the red zone.

TE Sneak Part 1 – Against the Bengals, 2nd and 1 from the 1and they will use motion from the TE Dawson Knox (88) along with play action to Gore to the left to sneak Knox out to the right.

TE Sneak Part 2 – At Tennessee, first and goal from the 8 and they’ll use play action to the right including pulling the left guard and Smith with sell his block before releasing across the formation to the left. Nice use of the blocking TE for the easy passing TD. This play may look familiar because in 2018 against the Steelers when Smith was with the Raiders they ran a very similar play sneaking him across the formation.

Roll Out – At Miami, 1st and Goal from the 9. The blocking scheme is going to look like a Zone run to the left. Allen is going roll out to the right with 3 options to that side. John Brown (15) is coming from the left side. The flow of the offensive line gets the defense moving that way leaving a linebacker on Brown.

At the Jets, first and goal from the 3 and this is similar to the last play with the Zone run look but Allen will fake the Jet sweep to Isaiah McKenzie (19). Allen will then roll out to the right and look for Knox who is well covered so he’ll dash to the end zone. Look at the job TE Tommy Sweeney (89) does on this play. Can’t do it much better than that.

At Dallas, it’s first and 10 on the 15 with an empty formation with two receivers to the right. Both of those routes are going to break to the inside. Allen is able to escape pressure and because of those routes has lots of room to run.

There are two things that need to be done and it’s something the Steelers have done well the last couple weeks.  Learning from their first game against Cleveland when Baker Mayfield was able to extend many plays, the past two weeks they have had better success limiting what the QB can do outside of the pocket.

First off, like most right handed QB’s, they tend to escape to the right.  On all of the scoring plays I watched whether by design or by availability Allen never ran to the left. They need to close down that avenue and make Allen do what is less comfortable.

Secondly, this likely won’t be done, say, inside the five but outside of that continue to use the spy. In recent weeks that spy has been Vince Williams and he has done a fine job.  Williams’ role has been diminished this year with the addition of Devin Bush and Mark Barron but his best work has always been near the line of scrimmage. He has 6 tackles, 2 for a loss and sack over the last two games. I expect him to see him in that role again this week.

Lastly, it’s all about discipline.  Above you can see the play action and the misdirection. Everyone needs to know what they are supposed to be doing and doing it correctly. This defense has been doing that consistently as of late and it needs to continue in the spotlight on Sunday night.

The five seed is on the line. Let’s go get it.