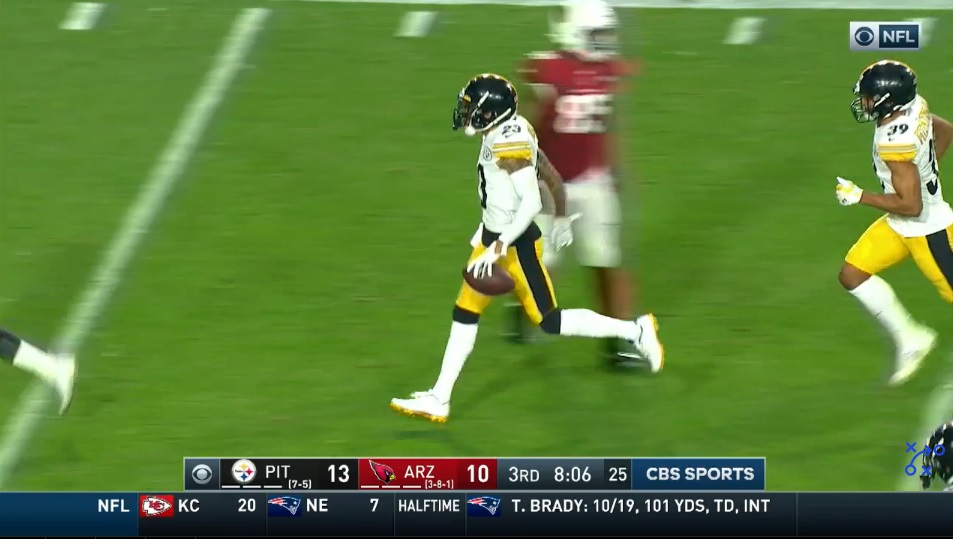 Monday morning, we wrote a breakdown of Joe Haden’s crucial, third quarter interception. And now I’m kinda wishing I had waited until the All-22 came out because there’s another layer to the play that’s definitely worth mentioning.

After the game, Haden told FS Minkah Fitzpatrick that he was going to jump the route the next chance he got. Which means he saw something prior to that play that clued him to what route combination was coming. The coaches tape revealed what that “something” was.

It’s the second quarter. 1st and 10, ball on the Steelers’ 11. Cardinals come out in an empty set from 12 personnel (1 RB, 2 TEs) with RB Chase Edmunds aligned as #2 – the slot receiver – to the two receiver side. To that side, they run an out/vertical combination. Edmunds on the out, the #1 receiver vertical.

Pittsburgh is basically playing Cover 2 so the flat is Haden’s responsibility regardless but he reads and tries to jump the route. It ends up looking like a “trap” coverage, though to be clear, it isn’t. Kyler Murray’s throw goes elsewhere but it’s information Haden stored away for the interception.

Fast forward to the INT. 2nd and 5, ball on the Steelers’ 26. Red zone fringe. Again, empty set out of 12 personnel with Edmunds aligned as the #2 to the two receiver side. Guess what route combination they’re running? Yup, out/go. Haden knows it from the start, hides his coverage a bit, showing pre-snap like he has the deep third, and baits Murray into the throw. He jumps the route and makes a great, diving INT.

Check out both plays here. The first shows the 2nd quarter snap, the second Haden’s pick.

And don’t take my word for it. Haden all but confirmed that was his key.

Read a lot this week about Haden’s football IQ and tape study. Mike Tomlin said as much at today’s press conference.

“Joe is just a quality professional,” Tomlin said. “He prepares all the time. He has a systematic approach to that preparation. And I really think it puts them in position to have a high floor, to be opportunistic, to be the guy that’s in that spot.”

Moments like this, one that directly led to Haden’s INT that took points off the board for Arizona, are proof positive of that. He’s had an awesome season and is right behind Fitzpatrick for most interceptions on the team.