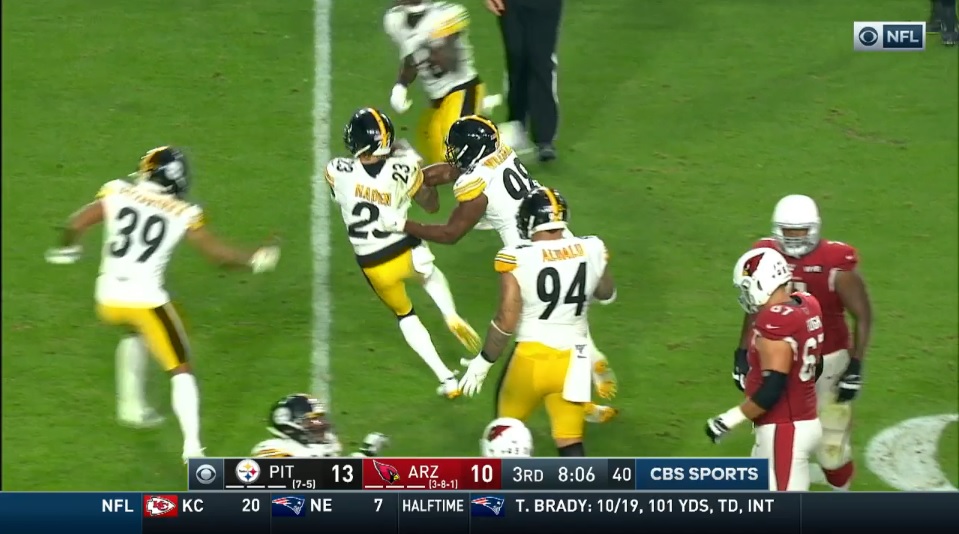 These last two weeks, Joe Haden’s been getting in on the takeaway party. Three interceptions over the past two games, including the game-enders to beat the Cleveland Browns and Arizona Cardinals. But his first INT against Kyler Murray Sunday was arguably just as impactful, the first of three from the Steelers’ defense. Getting the three picks is big enough but when they did so was just as important. Arizona was driving, on the red zone’s fringes down by just a field goal mid-way through the third quarter.

Here, it wasn’t some crazy scheme that made the play possible. Just a great read and reaction by a veteran corner. Let’s break it down.

Starting with a look at the whole play. Even without the All-22, we can tell this is Cover 2. Don’t mistake this for a combination, “trap” coverage we’ve seen this team run before. Just straight zone defending empty. You can see Steven Nelson, the corner to the bottom, play a similar flat technique with zone across the board. Cardinals trying to stress the Steelers’ base 3-4 by coming out in a heavier personnel but spreading the field.

Now let’s break down Haden’s technique, which is shown piece-by-piece in the following video. Haden is in zone coverage. Flat foot read, eyes on the QB, reading Murray. He told reporters he was trying to disguise it as Cover 3, fooling the rookie QB, and baiting him into the throw. Again showing that veteran IQ.

As soon as Haden sees Murray wind up, he’s planting and driving off his back foot, not needing to waste any steps to change direction and get downhill.

Finally, he goes out and makes the play. Great timing, angle, undercutting the out route by #2 – a RB, in this case – and completing the play by showing excellent hands and a diving catch.

Speaking to reporters after the game, Haden said he’s never been part of an NFL defense that’s produced so many big plays.

“No, not really,” Haden said. “Kinda reminds me of when I was in college. Our Florida Gators defense. Everybody was ready to make a play. That’s kinda how it is here. Everyone expects to make a play. We’re just depending on ourselves. Everybody is looking at the man in the mirror and feel like they’re going to be the one to make the next play.”

And the numbers back that belief up. Haden’s never been part of a defense that’s registered more than 29 takeaways until this season. Pittsburgh is up to 33 and aren’t showing any signs of slowing down. He’s been a huge part of those splash plays, tipping passes to be picked by Minkah Fitzpatrick or doing it himself, all season.