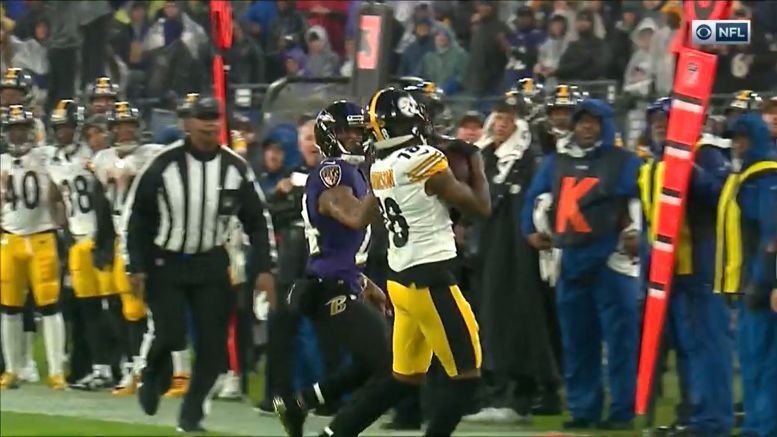 Arguably, there were maybe three or four players for the Steelers on offense during Sunday’s contest who had a good game, and two of them were rookies. Benny Snell was one. Wide receiver Diontae Johnson was the other.

In the finale, he caught another four passes for 54 yards, including a game-long 21-yard pass from Devlin Hodges. It was his seventh reception of 20-plus yards on the season, six of which came on deep targets, including the one against the Ravens.

Over the course of his final four games, Johnson caught 23 passes on 31 targets for 257 yards and two touchdowns. He ultimately led the Steelers in both receptions (with 59) and receiving touchdowns (with five). While it wasn’t quite as stellar as JuJu Smith-Schuster’s rookie year of 2017, it still bodes quite well for his future.

And the funny thing is that some of his best performances of the year were after he had already declared that he was feeling the effects of having hit the ‘rookie wall’. Being from Toledo especially, he hasn’t exactly been used to prolonged seasons against a sustained level of high competition, so this was new for him.

Ultimately, he set up the groundwork for a strong future this year. That’s the only thing the Steelers were looking for out of him in 2019, but due to circumstances, he had to play an even more prominent role, beginning with the rapid failure of Donte Moncrief, which ultimately resulted in him being released prior to the trade deadline.

He definitely still has some things to work on, particularly ball security, both during and after the catch, but you can see that Johnson has the potential to be quite good. His elusiveness in space has been somewhat surprising, and is hopefully an asset he can continue to build upon.