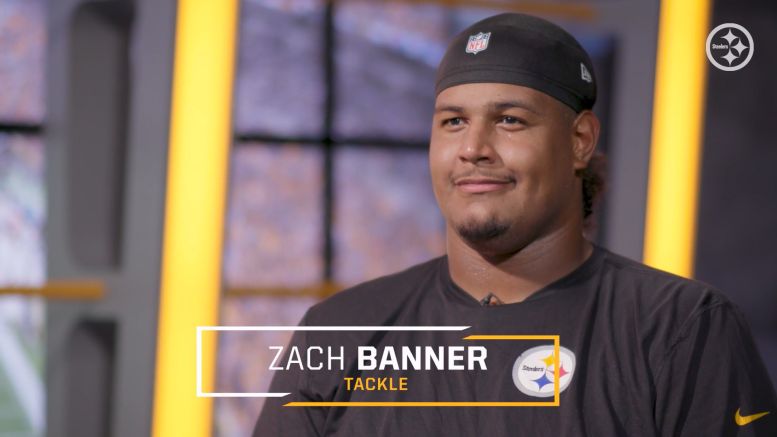 6’9” and well north of 300 pounds, Zach Banner is a load of a football player, a man who is hard to miss. The Indianapolis Colts, however, felt as though they missed on him after selecting him in the fourth round of the 2017 NFL Draft. He was off the roster by the time they kicked off for the regular season opener.

Banner would go on to do the rounds a bit, claimed off waivers by the Cleveland Browns and getting a front row seat to their 0-16. The ride along and the misery of his circumstances killed his passion for football and he turned to food, blowing up to 420 pounds by the end of his rookie year.

The Browns let him go in the offseason, picked up by the Carolina Panthers, but he didn’t make it through the Summer. Eventually, the Pittsburgh Steelers called him up to bring him in during training camp when they needed some bodies. And he ended up being somebody who would go on to make the roster.

He’s been with the Steelers for 24 games now, a season and a half, and he went from being a weekly inactive to the swing tackle in 2019, passing Chukwuma Okorafor, and getting liberal use as the tackle-eligible, particularly in more recent weeks.

He has become a fan favorite, the broadcast yesterday even showing a number of signs in the stands of people with…uh, Banner banners. Mike Tomlin opined that he didn’t want his big man to become a folk hero, but that’s out of their control whether he does or does not.

Technically, yesterday’s game was the second time that his team faced the Colts, the team that drafted him. But this was the first game in which he actually felt like he was established, that he was with a team who appreciated and believed in him.

He reflected on that and on his journey after the game on Twitter. “’Waste of a draft pick…’”, he wrote. “’Doesn’t belong in the NFL…’”. That was his story for pretty much his first two seasons. But he’s proving otherwise in year three with the opportunities he is getting. “Pittsburgh disagrees with all of that”, he went on, “and it’s been an inspiration to earn that trust these 3 years”.

Pittsburgh disagrees with all of that, and it’s been an inspiration to earn that trust these last 3 years.#HulkSmash pic.twitter.com/1KJfJRGWsR

Banner is not the first offensive lineman the Steelers have pulled from the proverbial scrap heap in recent years and turned into somebody with potential. Two of them, Alejandro Villanueva and Matt Feiler, are in the starting lineup as former undrafted free agents.

Both of them had to wait years after they declared for the draft before they could even get playing time, and even longer for the chance to be a starter. Will Banner get his chance? If so, when—and with whom?