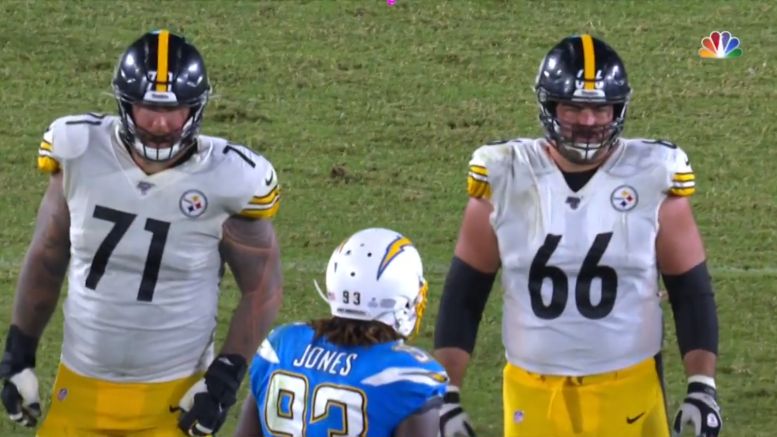 The Pittsburgh Steelers are stepping a bit out of the box, at least the box that they typically put themselves in, when it comes to putting together the offensive line this week in the absence of left guard Ramon Foster, who is missing a second game due to a concussion.

There have only been very rare instances in which the team has opted to move a starter from one position to another, and install a backup in the other player’s original position, in order to accommodate such a circumstance. I can recall several years back when they moved Maurkice Pouncey to guard when there was an injury because they were much more comfortable with Doug Legursky’s ability to handle the center position.

In this instance, they are moving right tackle Matt Feiler to left guard, rather than simply starting B.J. Finney there, who has about half a dozen starts or so over the course of the past four seasons filling in for Foster. It’s unclear as to why they’ve made this decision.

Not even Feiler seems to know.

“They didn’t really give me an explanation” as to why they were moving him over”, he told Chris Adamski late last week. He had been starting at right tackle since last season, and hadn’t gotten much time along the interior since last offseason. “I don’t know what they had in mind”.

There has to be some rhyme or reason to the decision, however, because it’s not one that would be made arbitrarily. As mentioned, Finney is already an experienced starting-caliber player, and has put together quality starts in each of the past four years when called upon. And the majority of those starts came at left guard.

He even started there last week against the Indianapolis Colts, and there was nothing in his performance to indicate that they would be unsatisfied with his work. He wasn’t even called for any penalties.

Meanwhile, Chukwuma Okorafor will make his 2019 debut with his second career start at right tackle. It’s also not clear why they are not going with Zach Banner, who had seemingly won the backup job, unless it’s simply because they want to keep him in the tackle-eligible role.

“Being able to face a guy like [Aaron] Donald”, he said, “it should be fun”. Yeah, I bet it will be, though in his defense, his lone start last season came against Von Miller when the Steelers faced the Denver Broncos. He got a lot of help, and did give up a sack, but he generally was satisfactory under the circumstances.