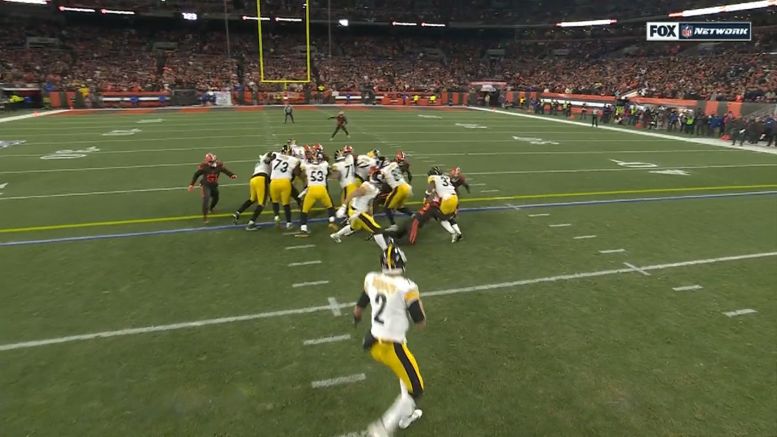 According to Pro Football Reference, the Steelers have faced those circumstances on 28 plays this season. That is the middle of the pack in the NFL in opportunities. They’ve gotten a first down on those plays nine times.

This is not relevant to the article, but the Steelers’ defense is also the second-worst in the NFL in stopping offenses in these situations. They have allowed a first down given those parameters 78.3 percent of the time. Only the Carolina Panthers have been worse.

On Thursday, the Steelers faced third or fourth and one or two a full seven times. They averaged 1.3 yards to go. They gained an average of 0.1 yard. The only successful conversion that they had was a quarterback sneak by Mason Rudolph.

“Any time you can’t convert you turn the ball over”, the quarterback said after the game. “You’re putting the ball in their hands. Those were tough, but we still had a chance to come back and keep moving the ball. We moved the ball well, I thought, I just ended up turning it over in crucial situations. So, yes, they were critical, but you’ve got to move past it”.

Only two of the plays were carries, including the Rudolph keeper. Trey Edmunds was also stuffed for a loss on third and one in the second quarter from the Browns’ 45-yard line. Rudolph threw incomplete for Vance McDonald on the next play to turn the ball over on downs.

Rudolph was 0-for-5 passing on third and fourth down with one or two yards needed, and obviously for zero yards. Four of them were short passes. One was batted down by Chad Thomas, another was broken up by Mack Wilson.

There are a variety of reasons that they have accumulated so many failures, but the bottom line is that they simply have to stop happening. They only went 2-for-5 converting against the Los Angeles Rams on Sunday, and 0-for-1 against the Indianapolis Colts and the Miami Dolphins, so they are just 3-for-14 since the bye week. That’s a conversion rate of just 21.4 percent. Barely one in five.