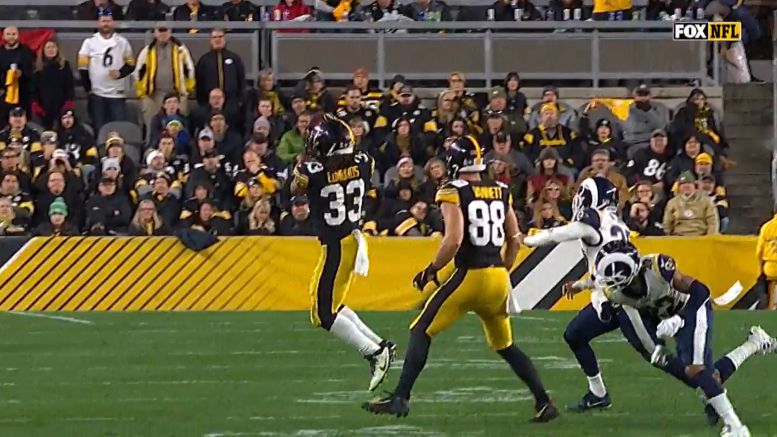 One of the traits of a good leader is the ability to build up those who are under and around him. While the quarterback position isn’t formally ‘above’ any other position, there is a natural leadership element to it as the one who navigates the plays and is responsible for distributing the football.

And Mason Rudolph has really seemed to naturally flash those leadership qualities even before the Pittsburgh Steelers drafted him. One point of interest that I noted, for example, in his post-game press conference last night was that he deflected a praise-based question to the maligned running back group.

When asked if he felt like the coaching staff was building trust and confidence in him, he said that he believed that was the case, but that it’s more a matter of the offense as a whole, and he cited one play in particular.

“I think the trust factor with the offense, with the running back, Trey Edmunds, to make that catch on fourth and one, it shows the depth and development of the running back position, and trusting to put the ball in his hands in a crucial situation”, he said.

“Hats off to Trey and [Tony Brooks-James] for the way that they stepped in, Jaylen Samuels with the upgraded load that he’s been taking the past couple of weeks, filling in for James [Conner]. They’ve done an awesome job, great attitudes, and that’s what you want from those guys to be able to step up in any situation”.

Meanwhile, outside observers would be inclined to focus on the fact that the group as a whole rushed for just 41 yards on 24 rushing attempts, barely a yard and a half per attempt. Samuels got 14 carries for just 29 yards. Brooks-James got six carries and gained 11 yards. Edmunds gained just one yard despite four attempts.

Samuels and Edmunds combined for five receptions as well, totaling 25 yards. Again, not a lot, but it also included that critical fourth-down conversion, one of the biggest plays of the game, and a call that was big for the offense, those on the field.

“I was excited that we were gonna go for it because I felt like we had some momentum on that drive and had been moving the ball well, and just needed another chance to keep it rolling”, Rudolph said about getting that call to run the play.

“The reaction, there was no reaction. It was just, ‘hey, execute’. Obviously we were excited that we were going for it, but calm, cool, and collected, and just go execute the play like we do in practice and let the chips fall where they may”.