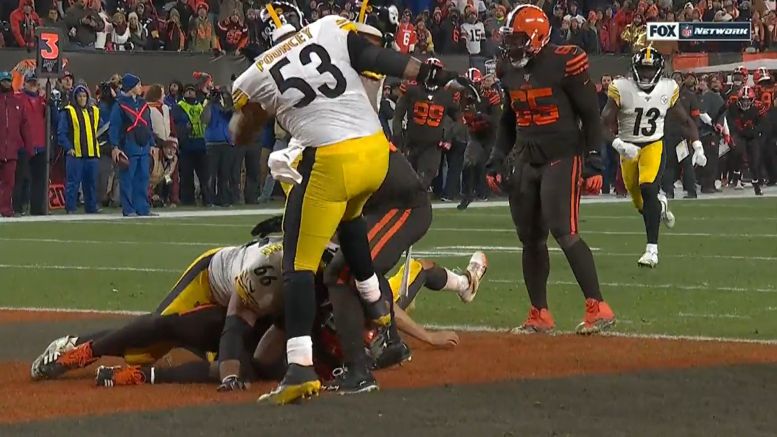 I’m pretty sure just about every offensive lineman had the same reaction after they watched Myles Garrett slam Mason Rudolph’s own helmet on the quarterback’s uncovered head: I have to do something. Or I would have done something if I were in those same shoes. The Pittsburgh Steelers’ offensive linemen have a strong history of having the backs of their quarterback, especially Maurkice Pouncey, and for that, he received a three-game suspension.

Pouncey told reporters in the locker room immediately after the game, when asked if he expected to be suspended after he threw several punched and a kick at Garrett while he was on the ground, “at this point, who cares?”.

The discipline doesn’t matter. It doesn’t change out Pouncey would have reacted, at least generally. He did say that he “blacked out” after he saw what Garrett did and didn’t even have the ability to recall exactly what it is that he did after that. But he wasn’t alone in feeling that reaction.

Just one of many examples is Philadelphia Eagles tackle Lane Johnson. He was one of numerous players around the league who were asked to comment on what happened in the game Thursday night between the Steelers and the Cleveland Browns, and I think his response spoke for many in offensive line rooms at every level of the game.

“I’ve never taken [my helmet] off and swung it”, he said. When asked how he would have reacted if Carson Wentz had been assaulted in the same manner as Rudolph, he told reporters, “probably would’ve done the same shit Pouncey did. What are you supposed to do? If you don’t do anything, it’s not gonna look good”.

It’s extremely difficult in the heat of a moment such as that not to fight the impulse of a violent reaction toward a person who just physically assaulted a person that you care about, especially somebody that you work with closely day in and day out. As I said in a previous article today, I don’t and am not going to condone violence. But it’s easy to understand the trigger here, and Garrett isn’t going to win much sympathy for how Pouncey responded to what he did.

The Steelers have Pouncey’s back, without question, and as I also wrote earlier today, I think the statement that president Art Rooney II even speaks to that. They understand what he did and why he did it. I think everybody does. He still has to be held accountable for his response, but it’s not complicated to see why things unfolded as they did.