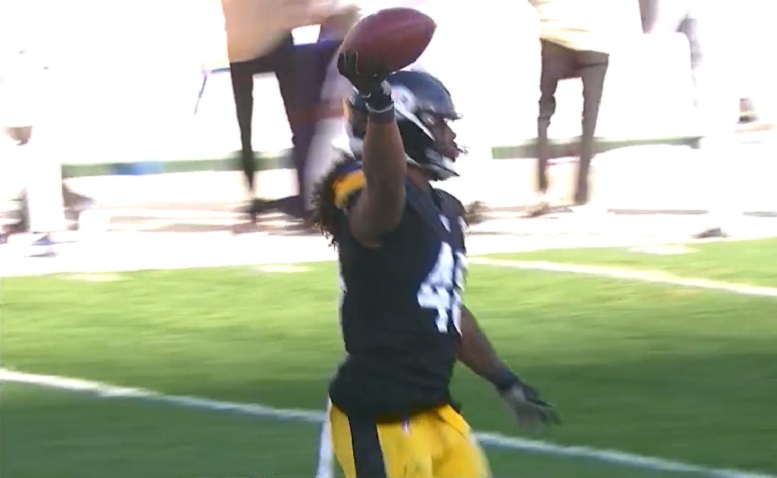 Pittsburgh Steelers outside linebacker Bud Dupree was named the AFC Defensive Player of the Week for Week 9 on Wednesday after registering two sacks, a forced fumble, a fumble recovery and key end-of-the-game tackle for loss in the team’s Sunday home win over the Indianapolis Colts. Dupree is now at the halfway point of having a career season and his timing couldn’t be more perfect with him currently being scheduled to become an unrestricted free agent in March.

Whether or not the Steelers will retain Dupree past this season will be topic of conversation being had by most everyone who follows the team for the next several months. Dupree, however, let it be known on Wednesday that he isn’t terribly worried right now about what the future hold for him in the offseason as he believes he’ll cash in big one way or another as long as he continues to play like he’s played in the first half of the regular season.

“I mean, I’m straight on it,” Dupree said on Wednesday concerning him potentially cashing in big after the 2019 season is over with, according to Will Graves of the Associated Press. “I’ll play it by ear. I bet on myself. It helped me out. I’ll probably make more money (next) year than I would have made on an extension.”

Dupree is currently earning $9.232 million this season on the fifth-year option portion of his rookie contract that Steelers picked up well prior to the start of the 2018 regular season. While the Steelers could have signed Dupree to a long-term contract extension during this past offseason, the team’s former first-round draft pick out of Kentucky made it sound like on Wednesday that the two sides were never close to consummating such a deal.

Assuming the Steelers don’t break from their long-running pattern of negotiating contracts with players in-season, Dupree will enter the offseason unsigned. The Steelers can obviously try to negotiate a new deal with Dupree once the offseason gets underway, however, the outside linebacker will likely need a very lucrative offer that includes a yearly avenge greater than the 2020 franchise tag amount for his position to get him to sign. In short, if the Steelers can’t sign Dupree to an extension during the early stages of the offseason, they’ll likely need to place the franchise tag on him to keep in Pittsburgh at least one more season.

Currently, the franchise tag for linebackers is projected to $16.266 million, according to Over the Cap. While the transition tag is projected to be a little lower than that at $14.087 million, it doesn’t offer great protection from other teams potentially signing him away from the Steelers via an offer sheet. Placing a $16.266 million franchise tag on Dupree by the 2020 deadline would also stress the Steelers 2020 salary cap situation that figures be stressed enough as it prior to tying up a big amount such as that.

While some who follow the Steelers and Dupree closely might think that the outside linebacker still shouldn’t command more than $16 million per year regardless of how good of 2019 season he winds up having, history says he’ll likely get greater than that projected tag amount should he ultimately be allowed to test unrestricted free agency in March.

Just last offseason, Za’Darius Smith, who played with Dupree at Kentucky, signed a four-year, $66 million contract with the Green Bay Packers right at the start of free agency in March after having a career 2018 season with the team that originally drafted him, the Baltimore Ravens. Smith’s 2018 season with the Ravens included him registering 45 total tackles, 8.5 sacks, two defensed passes and a forced fumble. So far this season, Dupree has 32 total tackles, 6 sacks, two passes defensed, two forced fumbles and a fumble recovery. In short, with eight games remaining in the 2019 regular season, Dupree should shatter the numbers that Smith posted in 2018.

Assuming he gets to free agency in March, Dupree is likely to have some competition from a few other producing unrestricted edge-rushers coming off nice seasons. Even so, Dupree just turning 27 not long before free agency starts will make him a top target of a few teams likely willing to pay him $18 to $20 million a season.

Even though Dupree’s still several months away from finding out how just how big he’ll ultimately cash in by the middle of next March, Steelers defensive lineman Cameron Heyward has begun the push to keep the outside linebacker in Pittsburgh in 2020 and beyond.

“When we get there, we’ve got to hold on to him as much as we can,” Heyward said this week, according to Graves.

As I stated earlier in this post, we’re likely going to be discussing Dupree’s future past season quite a bit between now and March and especially if continues to have performances like the one he had Sunday against the Colts.