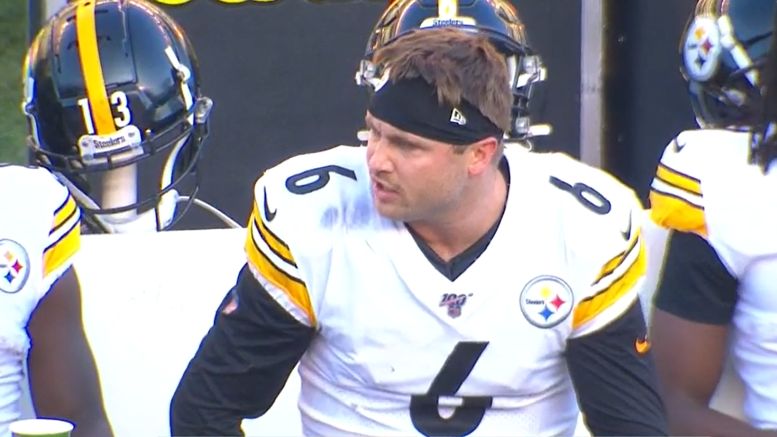 Devlin Hodges has played more than any other rookie quarterback for the Pittsburgh Steelers since Ben Roethlisberger. Not that that should be shocking, though they have drafted multiple players in the middle rounds who never even saw the field as a rookie.

Of course, a freak course of events led us to where we are now. Hodges, undrafted out of Samford, didn’t even get signed to the practice squad initially, but has wound up as the top backup to Mason Rudolph. Today, he went in for Rudolph after the latter was benched, and it’s possible he’ll start the next game.

After helping lead the Steelers to 13 unanswered points in the second half in a big comeback win, Hodges talked after the game about how much every little bit of playing time he gets is a big help, and how difficult it is to advance with limited opportunities in practice.

“For me it was just obviously a confidence booster”, he said of his early touchdown to James Washington. “I didn’t think that on the third play I was in I would be throwing a 79-yard touchdown pass, but if I could go back and do it again, that’d be pretty cool.

His most extensive playing time came in Week Six when he had to start with Rudolph out due to a concussion. Though he didn’t have a great game, he looked composed and contributed to a key road win that night.

“I think it helped a lot, just being able to kind of get a feel for the game”, he recalled of his win over the Los Angeles Chargers. “Kind of getting the flow of the game and going up against different people, the speed of the game. The more I play, the better it gets, it slows down. Just always be prepared”.

Even though Rudolph was coming off a rough week and a half that saw him throw four interceptions, have his head bashed by his own helmet (courtesy of Myles Garrett), and then be accused of racism, nobody really knew what to expect. Not that Hodges expected anything to be different.

“The only expectation that I have is, if my number’s called, stay ready, be ready”, the rookie said. “It’s kind of hard to do when you’re not getting reps in practice. That’s why every time I get a chance to be on the scout team, I just work on my craft. It just goes back to being ready when my number’s called”.

Hodges ended up only completing five of 11 passes, albeit for 118 yards. Of course 79 yards came on the catch-and-run score by Washington. Head coach Mike Tomlin toyed with the media after the game, suggesting that he may already know what his decision at quarterback will be for next week. If he does know, he’s the only one.