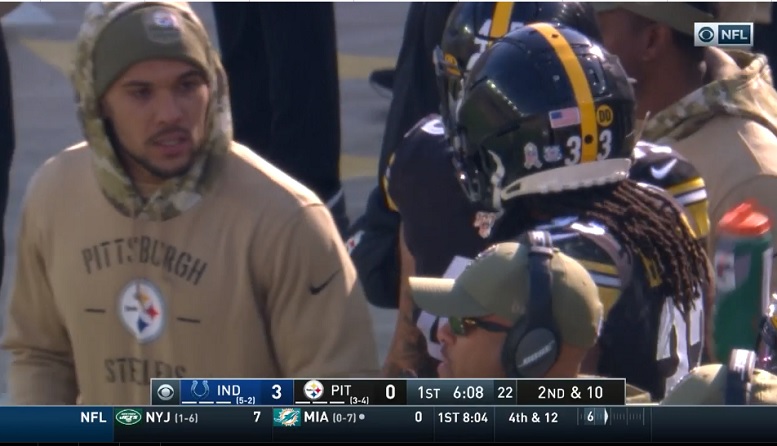 Pittsburgh Steelers running back James Conner was unable to play in Sundays hone game against the Indianapolis Colts due to a shoulder injury and with Week 10 close to getting underway it sounds like he’ll begin it very questionable for the team’s next game against the Los Angeles Rams.

On Monday, Conner, who missed his first game of the 2019 season on Sunday, was asked during his weekly interview on 93.7 The Fan if he was close to playing against the Colts.

“No, I wasn’t able to practice throughout the week and the way that my shoulder was feeling later on in the week, about Friday I kinda knew that I wasn’t going to be able to go ahead and play on Sunday,” Conner said. “So, I really just attacked rehab hard all weekend. So, I really wanted to play, wanted to stick through it, but just couldn’t do it.”

Conner was then asked about the Sunday morning report by Adam Schefter of ESPN that stated that Conner’s shoulder injury is a real concern to the Steelers and that he might miss more than just the game against the Colts moving past Sunday.

“I mean, I know where my body is and how it’s feeling,” Conner said. “I guess they had reason to be concerned after the injury first happened, but I don’t wanna look at it as long-term.”

Conner was asked if his shoulder injury is one that’s hard to get a handle on due to the nature of it.

So, what is Conner’s approach to this week to his injury going to be and what is he hoping for?

“It’s going to be the same thing every week,” Conner said. “You know, hopefully when I go to sleep and I wake up the next morning, I hope I feel a little bit better. And so, the goal is going to be trying to go this week. I mean, that’s going to be my goal. I don’t like missing games at all, but I’m not gonna put a timetable on myself and say it’s three weeks or four weeks or if it’s just one week. Every day I wake up, it’s been getting a little bit better. And so, I was running today, doing more. Like I’ve got more strength in it. We play in six days. A lot can happen in six days with my progress. So, as always, the goal is trying to be playing next week.”

Conner was then asked if he’s not ready to rule himself out from playing Sunday against the Rams.

“Nope, I don’t know how it’s going to feel so I hope I can play,” Conner said.

Judging by the context and tone used by Conner when talking about his shoulder injury, it certainly seems like he’s highly questionable to play Sunday against the Rams. Steelers head coach Mike Tomlin will meet the media on Tuesday and at that time he’ll likely provide some sort of update on Conner and his shoulder injury.

The Steelers first injury report of Week 10 will be released on Wednesday after practice has concluded and it’s a good bet that Conner will be listed on it as not practicing fully or not practicing at all. We’ll see what the next several days has in store for Conner, but right now I’d be willing to bet he sits out Sunday against the Rams. If that’s ultimately the case, running back Jaylen Samuels would likely start again and be backed up by Trey Edmunds.