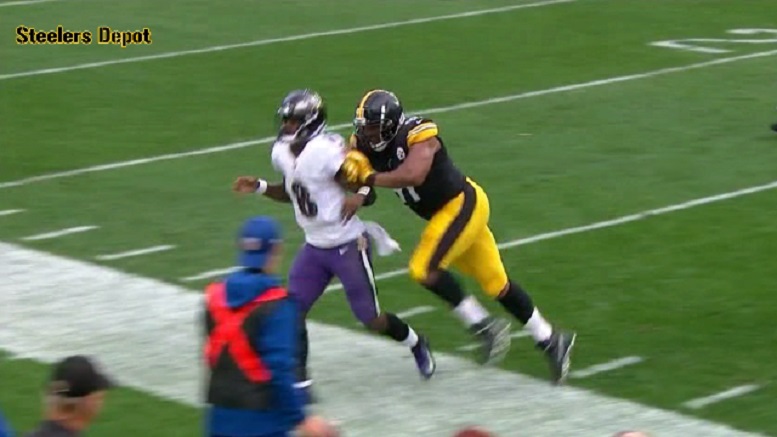 Pittsburgh Steelers defensive end Stephon Tuitt lost a little bit from his Week 5 game check this past week due to him being fined for his late hit on Baltimore Ravens quarterback Lamar Jackson in the first quarter of last weekend’s Sunday home game.

Earl Thomas, who was fined $21,056 for his high hit on Steelers QB Mason Rudolph, wasn’t the only player docked some money from the game. Steelers DL Stephon Tuitt was fined the same amount for his shove of Lamar Jackson out of bounds.

Tuitt was fined $21,056 for pushing Jackson down just after he had stepped out of bounds following him throwing a pass on a 2nd and 3 play from the Steelers 4-yard-line with 5:45 left in the first quarter of Sunday’s home game. The push by Tuitt caused Jackson to collided with a female photographer on the sideline. Tuitt was flagged for roughing the passer on the play.

The $21,056 fine amount was the same amount that Ravens safety Earl Thomas was fined for his helmet-to-helmet hit on Steelers quarterback Mason Rudolph in the third quarter of Sunday’s game. That hit by Thomas on Rudolph knocked Rudolph out before he even hit the ground. Rudolph suffered a concussion as a result of that hit and that injury will prevent him from playing Sunday night against the Los Angeles Chargers.

In somewhat related news, Steelers outside linebacker Olasunkanmi Adeniyi, who was flagged for what officials deemed as being a low hit on Jackson later in the fourth quarter of Sunday’s game, helping spark Baltimore’s game-tying drive, was not fined by the league this past week for that action.

One of these two plays was flagged for roughing the passer and one of them wasn't. #Steelers pic.twitter.com/nCpp6RyTpu

One guy who wasn’t fined: #Steelers LB Olasunkanmi Adeniyi, who was flagged for what officials flagged as a low hit on #Ravens QB Lamar Jackson, helping spark Baltimore’s game-tying drive in a game it won in OT.