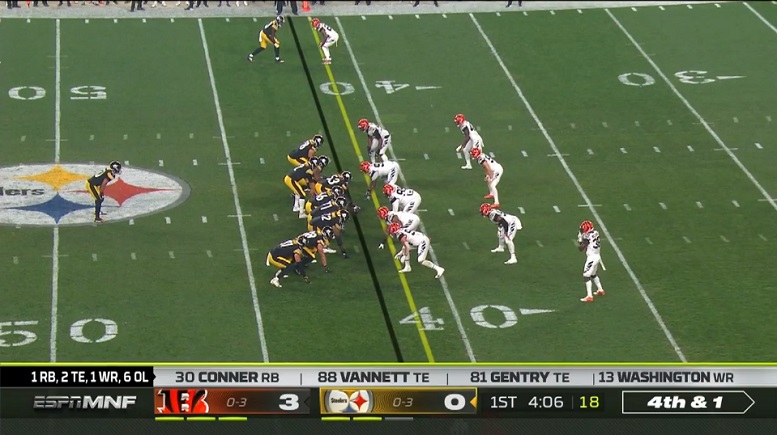 The Pittsburgh Steelers haven’t been overly great in short-yardage situations so far this season and that was certainly the case Monday night in the team’s home win over the Cincinnati Bengals.

Against the Bengals, the Steelers offense faced 3 or less yards to go on either third or fourth down five times in total and the three times they ran it, the running backs failed to pick up the first down. One of those times was a fourth-and-one from the Bengals 42-yard-line and instead of calling a quarterback sneak, offensive coordinator Randy Fichtner chose to have running back James Conner run up the middle and he was stopped for no gain.

On Thursday, Fichtner was asked if quarterback Mason Rudolph has the authority to call his own number in short-yardage situations.

Fichtner was then asked to comment on why he hasn’t called for a quarterback sneak since the game last year against the Jacksonville Jaguars.

“We did once in a while,” Fichtner said. “People who know me know that it’s not been probably one of my favorite things in the world to do. But I wouldn’t mind it in certain situations, but when it’s obvious situations, 4th and 1, 3rd and 1, it’s something else we can do. I value our quarterback. There’s a lot of stuff going on in piles, and let the truth be known, if we can’t hand it to one of our backs, and we can’t block, we didn’t deserve to win that down.”

After Fichtner made those remarks, Rudolph was asked during his Thursday media session if quarterback sneaks are something that he’s comfortable doing and if he’s lobbied Fichtner to maybe allow him to do some.

“Yeah, we have that in,” Rudolph said. “It’s just a matter of calling them. And obviously we’ve got a lot of great backs in those sort of short yardage situations and they’ve been very effective getting us those yards. But, obviously, I would love to do that. I tell him every week, ‘If you want to call it and go ahead, because I’ll get it for you and we’ll keep the chains moving.’ So, it’s just a matter of who he gives it to and what he calls and we’re going to execute whatever decision he makes.”

Rudolph shouldn’t feel bad because the lack of quarterback sneaks in Pittsburgh has gone on for a long time and especially ever since quarterback Ben Roethlisberger had two in one game against the Seattle Seahawks during the 2015 season.

Fichtner’s Thursday comments about quarterback sneaks clearly shows that Steelers are living in their fears when it comes to calling such a play.

Analytics have shown over the years that quarterbacks sneaks are much more successful than running back runs in short yardage situations. According to my quick and dirty research on Pro Football Reference, quarterbacks have converted 29 of the 35 (82.9%) third and 1 and fourth and 1 rushes so far this season. Non-quarterbacks are 81 of 118 (68.6%), per that research. I’m not sure how many of those 35 quarterback rushes were designed sneaks, but odds are good most of them were.

Will Fichtner change his mind in the coming weeks when it comes to quarterback sneaks? we’ll see, but with the Steelers now on their second quarterback, I doubt he will. New England Patriots quarterback Tom Brady, surely has no issue calling his own number when one yard is needed and usually gets that yard as well and in the process avoids all the bad things that happens in piles.

Remember way back in the good old days when the #Steelers weren't afraid to call quarterback sneaks? pic.twitter.com/M0mLkOLge0