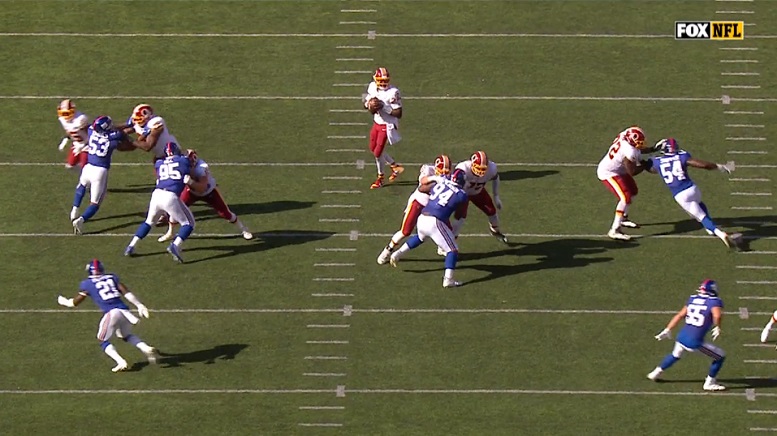 With Pittsburgh Steelers outside linebacker Anthony Chickillo possibly now on the brink of being released by the team following him being charged with simple assault against his girlfriend over the weekend, its not surprising to hear fans of the team hearkening back to the team’s decision to part ways with rookie outside linebacker Tuzar Skipper just prior to the Week 1 game against the New England Patriots.

With Skipper now being back in the front of the minds of several fans of the Steelers on this Monday, perhaps it’s time to look in on how the undrafted Toledo product has been doing with the New York Giants, the team that claimed him off waivers from Pittsburgh in Week 2.

While Skipper has dressed for all six games for the Giants since being claimed off waivers by them, he hasn’t logged all that much playing time. In fact, through the Giants Week 7 Sunday game against the Arizona Cardinals, Skipper has played a total of 40 defensive snaps and 27 special teams snaps.

Statistically, Skipper has registered two total defensive tackles, both assists, with one of those being a half a sack. He’s also been credited with a fumble recovery on defense and one special teams tackle. All four of those plays that Skipper has been directly involved in that led to a stat for him are below for you to see. Obviously, they don’t tell the whole story regarding his play.

According to Pro Football Focus, 14 of the 40 total defensive snaps that Skipper has played so far this season for the Giants have come against the run and he graded out quite well on those plays with a score of 79.5. 24 of his defensive snaps have included him rushing the passer and outside of his half a sack, he’s failed to register any other kind of pressure. PFF has Skipper’s pass rush grade at 52.8 through Week 7. The other two defensive snaps played by Skipper to date included him dropping into coverage.

While Skipper has played on the Giants kickoff and punt coverage teams so far this season, the majority of those 27 total snaps, 16 to be exact, have come on the former with eight others coming on the latter. Skipper’s other three special teams snaps came as a member of the kickoff return team and all of those happened way back in Week 3.

Against the Cardinals this past Sunday, Skipper logged just one defensive snap and that was his lowest total since becoming a member of the Giants.

It’s still too early to tell if the Steelers let a very good player get away from them in Skipper as he’s just not getting a lot of playing time with the Giants. Will he stick on the Giants 53-man roster the remainder of the season? We’ll certainly see, but his defensive snaps decreasing in Week 7 can’t be taken as a positive sign just the same.

It’s probably worth reminding everyone that Skipper was waived by the Steelers just ahead of their Week 1 game against the Patriots to make room for wide receiver Johnny Holton. Holton has since payed 79 offensive snaps and 86 special teams snaps. He’s yet to register a reception but does have three special teams tackles to his credit.

Had the Steelers found a way to keep Skipper back in Week 1, he likely wouldn’t have dressed until Week 3 when Chickillo missed his first of three games with a foot injury. Even if Skipper had dressed for any of those three games that Chickillo had missed, it’s hard to envision that he would have been given much, if any, defensive playing time due to fellow outside linebacker Olasunkanmi Adeniyi being ahead of him on the depth chart.

Should Chickillo wind up being released in the coming days due to his recent arrest, the Steelers might decide to bring back outside linebacker Jayrone Elliott, who was waived just ahead of the team’s Week 6 road game against the Los Angeles Chargers.

Up until this past weekend, Chickillo’s roster spot was never in jeopardy. After all, the Steelers signed him to a two-year, $8 million contract this past March and that deal included a signing bonus of a little more than $2 million. In short, that was a one-year contract for $3 million that Chickillo signed and it made him a roster lock because of it. He was a core special teams contributor and an experienced depth outside linebacker.

Would it be nice if the Steelers still had Skipper on their 53-man roster considering what all has transpired with Chickillo this season? Absolutely, but with that said, the jury is still out on Skipper and his future as well. I’ll make sure to track his play the remainder of the season and will provide another update in roughly another six weeks.