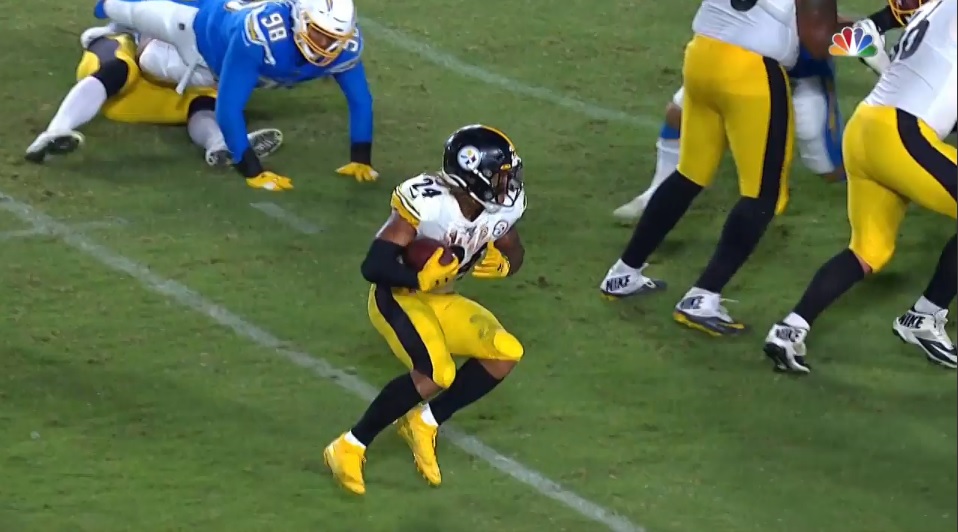 It became a bit dicey there late in the fourth quarter, but Sunday’s road win against the Los Angeles Chargers was a great send-off into the bye week for the Pittsburgh Steelers, as the short-handed Steelers scratch and clawed their way to a 24-0 lead before holding on for a 24-17 win.

Stephon Tuitt, Joe Haden, James Conner and TJ Watt were a few of the notable names that went down with an injury in the win, but what a win it was. The run game looks to be back on track as Conner and Benny Snell Jr. ran well, while Devlin “Duck” Hodges did just enough offensively.

Defensively, this unit is rounding into a top 5 unit, and it couldn’t come at a better time. Devin Bush and Vince Williams look like an awesome pairing inside, while the defensive line and outside linebackers (Watt and Bud Dupree) continue to dominate snap to snap.

The great news is the secondary is coming along nicely, especially Cameron Sutton, who had an incredible fourth quarter.

These grades are going to be fun.

Much like the Steelers did in Week 3 on the road against San Francisco, Pittsburgh played it safe with Hodges, opening up quick, check-down throws, keeping him from making the devastating mistake.

Hodges did make one mistake in the win, throwing an interception late over the middle intended for Johnny Holton that Rayshawn Jenkins jumped in front of. Hodges also underthrew JuJu Smith-Schuster early in the game on a double move along the left sideline in which Smith-Schuster badly beat his defender.

The undrafted rookie out of Samford attempted just four passes 20+ yards down the field, and all of his completions came within 10 yards of the line of scrimmage. Fortunately for the Steelers and Hodges, Pittsburgh did a good job running the football against the Chargers, allowing Pittsburgh to consistently move the football in the first half.

The second half was a bit rough offensively as the Steelers somehow got even more conservative. They wanted to run the clock out, so I get that. But Hodges needed to make some throws in the second half and the Steelers didn’t really ask him to.

Now that’s the Conner we’ve all been waiting for. Conner looked explosive, elusive, and powerful and had a real pep in his step.

Conner was a game-changer right away, making a number of defenders miss after the catch, and put his foot in the ground and exploded downhill as a runner.  With Conner running well and making plays after the catch, the Steelers were able to rely on him heavily, leading to two touchdown drives.

Unfortunately, Conner got banged up, forcing Snell Jr. into the game. In his first extended action, Snell looked pretty darn good, ripping off a 20-yarder while giving the Steelers a physical, 3-yards-and-a-cloud-of-dust offense to try and grind out the win.

However, if you take away that 20-yard run by Snell, he finishes with just 3.43 yards per carry. That’s not great, but he filled a role and did well in said role.

There was balance, explosive playmaking and a sense of smashmouth football once again with Conner and Snell rolling.

It was great to see Donte Moncrief make a ridiculously tough diving catch for a first down, while it was relieving to see Diontae Johnson stay in the game after taking a hellacious shot from Thomas Davis Jr. that drew a flag.

I mentioned earlier Hodges missed Smith-Schuster on a double move early in the game, so it wasn’t a great night for Smith-Schuster as a receiver. He did have a holding call on screen to Snell that wiped out a first down, so that was tough.

Johnson is a really good downfield blocker, by the way. He’s developed in that area very quickly.

Vance McDonald and Nick Vannett made just one catch for 5 yards each, but they made their biggest impact as run blockers in the win, serving as extra tackles at times to open rushing lane for Conner and Snell Jr.

McDonald was the primary blocker at tight end, pulling left and right to serve as a lead blocker at times, and also crashed down the end of the lines.

Vannett’s catch was a great diving grab over the middle with a defender all over him.

While I did say the Steelers ran the football well, there still wasn’t that consistent push up front that we’ve been used to over the years.

Ramon Foster looked a bit slow at times pulling, holding Conner up on a few runs, while Alejandro Villanueva looks like he’s still struggling to find his power he once had in recent years.

The real issue with the offensive line was Maurkice Pouncey and his issues with snapping the football cleanly to Hodges. In the third quarter Pouncey had at least four bad snaps, the last of which possibly cost the Steelers a touchdown as the ball went through Hodges legs and forced him to throw a third-down pass away after scooping the ball up.

It absolutely sucks to lose Stephon Tuitt for the year, but if Tyson Alualu can play like he did on Sunday, this defensive line won’t have that much of a falloff without Tuitt.

Alualu played like a man possessed against the Chargers, tipping the ball into the air for Bush’s interception, sacked Philip Rivers and was hard to block in the run game.

Cam Heyward and Javon Hargrave were equally as disruptive, albeit without the stats. Heyward and Hargrave played a huge hand in the Chargers rushing for just 2.8 yards per carry. Heyward dominated left guard Forrest Lamp for long stretches of this game, while Hargrave continues to play at a high level.

Dan McCullers had a silly hands to the face penalty on that extended a drive, and was mostly nonexistent outside of that.

Bush has to be the front-runner for the NFL’s Defensive Rookie of the Year.

Bush had a whale of a game on Sunday night, recovering a fumble for a touchdown, and then intercepting Rivers on the very next drive. Bush was strong in coverage, flew all over the place against the run, and was consistently around the football.

The only knock on Bush from Sunday night was the taunting penalty he took.

Vince Williams has to start and play nearly every snap moving forward next to Bush. I’ve never seen Williams play at this high of a level, but it’s incredibly fun to watch. He’s letting it all hang out and bringing a serious edge to this defense.

Tyler Matakevich filled in admirably for Bush when the rookie left the game due to injury. He flies downhill against the run and is a sure tackler. That’s what you want in a backup.

Outside, Watt and Dupree set the edge well against the run and really made Rivers uncomfortable early in the game from a pass rushing perspective. This is no doubt Dupree’s best year, and he’s getting better and better each week. The same goes for Watt. This is quite the OLB duo.

Anthony Chickillo had a strong game as well. He did drop an interception in the second half, but he also recorded half a sack and helped stabilize special teams.

Without Haden in the second half and already down Steven Nelson, this secondary fell apart slightly, allowing some easy pitch-and-catch throws by Rivers, letting the Chargers back into the game.

That said, Sutton saved the day. When Rivers targeted Sutton, Rivers was 0-for-4 with an interception, which sealed the game. He’s really developed into a strong option at corner, whether it’s outside or in the slot. And man, those ball skills!

Haden had a really good game before leaving with an injury. He played a huge role in shutting down Keenan Allen.

Artie Burns had a strong game until the fourth quarter when the Chargers really went after him. He played very well opposite Haden before that, which was encouraging.

Mike Hilton dropped an interception, as did Minkah Fitzpatrick. Terrell Edmunds looked like he was just running for the first time while trying to turn around on a deep ball that he probably should have intercepted.

The coverage breakdowns in the fourth quarter was very concerning, but fortunately it didn’t come back to really hurt.

But when you can shut down Allen completely, you take that all day.

That was by far the best performance Jordan Berry has put together as a punter for the Steelers. His punt late in the game pinned the Chargers at their own 1-yard line, thanks to a great job by Holton to get down the field.

Berry kicked directionally very well and pinned Desmond King to the sidelines often. That was great to see.

Tackling wasn’t much of an issue from watching the TV broadcast, but I did see Justin Layne miss a tackle after getting called for a false start penalty on a punt.

Switzer isn’t going to make many guys miss on returns, but he’s as steady as they come on punt returns. He knows when to catch the football, knows when to let it bounce, and he just doesn’t muff punts. That’s so important to have back there in today’s game.