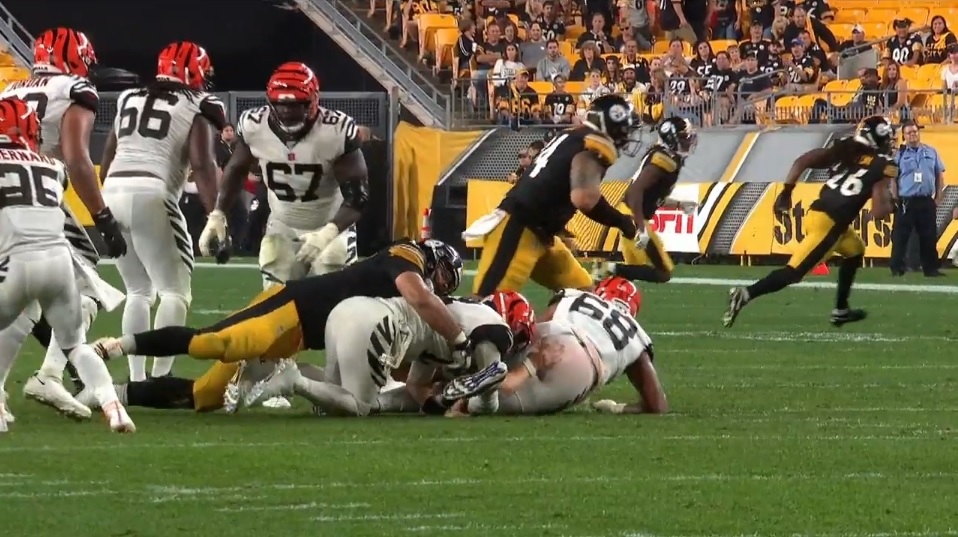 Another week, another trade. This time Pittsburgh sent a fifth round draft choice to the Seattle Seahawks for tight end Nick Vannett. Has Kevin Colbert gone senile or is he a wily old fox? Multiple transactions after the season has started? Trading away draft picks that are normally stockpiled. We’ll soon find out if these were desperate acts of a team with sinking fortunes, or just the right ballast to right the ship.

This game would also enshrine the next set of Pittsburgh Steelers Hall of Honor inductees. OT/TE Larry Brown, coach Bill Cowher, End Elbie Nickel, & WR Hines Ward welcome home to the Black & Gold. Each a well-deserved recipient of this honor.

Finally, the Cleveland Browns defeat of the Baltimore Ravens opened up the AFC North. Should the Steelers win their next two games they will be tight in the hunt for first place in the division.

Steelers Depot gives us specific things we should look for during the game. I always read these articles prior to kickoff:

Tom Mead identified the matchups to watch this week. Tom described his “irresistible force paradox” matching a serious weakness in both teams against the other. In this case, the Steelers anemic run offense against the Bengals porous rush defense.

Alex Kozora forecast what would happen in his Steelers versus Bengals prediction. Alex foresaw victory if the defense clamped a lid on big plays, the offense ran the ball effectively and Randy Fichtner’s scheme attacked the slot. He saw a loss if the OLB’s did not exploit the Cincinnati Bengals OT’s for sacks, the offense could not sustain drives, or Alex Erickson ran wild on returns. Alex predicted a 20-17 Steelers victory.

Dave Bryan identified the keys to a Steelers victory. His keys including getting both James Conner and Jaylen Samuels into the game. Also, on offense, using JuJu Smith-Schuster to attack the slot & receivers catching catchable passes. On defense, Dave keyed into limiting Tyler Boyd (3 catches for 33 yards), the OLB’s exploiting the weak tackles, limiting explosive plays to speedsters like John Boyd (3 catches for 36 yards) and shutting down screen passes to Joe Mixon & Giovani Bernard.

The offense began the game as if they intended to hand the game to the Bengals. On just the second offensive play of the game, Diontae Johnson fumbled the ball giving the Bengals possession at their own 15-yard line. Their second drive was ended when the offense failed to convert on 3rd and then 4th and 1. However, we already saw that this was not going to be a conventional Pittsburgh Steelers offense. Jaylen Samuels completed a pass to James Conner from a wildcat formation.

The 3rd Pittsburgh drive showed us why the use of replay for pass interference is garbage after a bad call on Johnny Holton was upheld in New York City. We also saw Nick Vannett catch his first pass wearing the Black & Gold. The drive ended with a punt but there was reason for optimism. The Steelers had half the field for the 4th drive. Mason Rudolph threw three short passes with a Jaylen Samuels run to get to the 21-yard line. Another short pass and James Conner shredded the defenders for the touchdown. The last possession of the half ate five minutes of clock, a sustained drive. The offense mixed in Conner & Samuels runs with passes to Diontae Johnson and JuJu.

On 3rd and 2 Samuels was caught for a 5-yard loss, he should have cut inside. But the Steelers got a field goal and left the Bengals with less than a minute to play and no timeouts. A shaky start but the offense looked up to the task in the second half.

The offense got 5 more possessions in the second half. Mason Rudolph looked comfortable in the pocket, evading rushers, and throwing on the run. The first drive covering 80 yards in eight plays for 4 1/2 minutes. Jaylen Samuels plunged in from the 2. The next drive was only 11 seconds, but it also ended with a touchdown. This time a 43-yard pass to a wide open Diontae Johnson. The third drive was the only time the offense went 3 and out all game. On 3rd & 3, Mason Rudolph and James Washington failed to connect. A rare miscommunication between the former college teammates. The 4th drive of the half-had Jaylen Samuels completing his 3rd pass of the game. The 9-play drive too over 5 minutes off the clock and added 3 points. Pittsburgh was able to bask in the victory formation for the final 1:50 of the game. Randy Fichtner displayed some wrinkles that few predicted. The wildcat might not work every week, but it was fun to watch. Let’s see if he has more surprises up his sleeve.

The defense came to play. The scourge of tight ends briefly worried me when Tyler Eifert easily converted a 3rd & 5 on the opening drive. The Bengals looked loose and were moving until Devin Bush recorded his first career sack. After a punt, the defense had less than a minute of rest before going back on the field after a turnover. They held the Bengals to 5 yards and 3 points despite starting on their own 15-yard line. The Bengals tried to get Joe Mixon, John Boyd & Tyler Eifert into the next two dives. Defensive pressure on Andy Dalton, sure tackling & coverage players in position just forced Bengals to punt. Andy Dalton started connecting with Boyd & Ross and entering the red zone for an apparent score when Bud Dupree strip-sacked Dalton to end the drive. This would be as close as they would get. The Bengals ended the half with the ball and Dalton trying to get them back from behind. Cam Heyward sacked him again and Dalton’s frustration was showing.

The defense limited the Bengals to two punts, intercepted the ball and took over he Bengals final dive on downs in the second half. The first drive was highlighted by another Heyward sack. Next, was a drive stymied by T.J. Watt & Javon Hargrave sacking Dalton on two separate plays. The Bengals finally was able to drive the ball from their own 20 to the 8-yard line but Mark Barron intercepted Dalton to end the scoring attempt. Cam Heyward continued to play despite an injury and forced a Dalton fumble that went out of bounds. Defenders were disrupting plays or tackling receivers preventing much yardage after catching the ball. Tyson Alualu showed surprising burst when he raced to sack Dalton on 4th & 10 to set up Pittsburgh’s victory formation. The defense played in unison. The defensive line penetrated and applied pressure, the secondary coverage did not breakdown, linebackers were making sure tackles and covering as well as disrupting screen plays. A dominant performance. Can they repeat that cycle a few times?

Chris Boswell is doing his job. A field goal to close the scoring in the first half. A 49-yard field goal on Pittsburgh’s penultimate possession of the game. His kickoffs were well placed. Alex Erickson did have a 25-yard return but only made it to his 25-yard line. Jordan Berry punted twice. One short 37-yard punt was fair caught at the 10-yard line while his other was a touchback but flipped field position.

Danny Smith alternated Ryan Switzer and Diontae Johnson at returning punts. Switzer had a 7-yard return, but it was negated by penalty. So, the return teams were not tested.

Michael Young had the best rated comment after the Johnny Holton push off penalty that was upheld by somebody in New York City. “I have no idea what a catch, hold or PI is in the NFL anymore. A league run by idiots and officiated by buffoons. I liked this game better when it had 50% of the modern rules and 200% of the common sense.”

Early in the game with outcome still in doubt, Nunya said, “Seriously, why the hell did we keep Mason if they won’t let him QB!? We’ve become an embarrassment. And those defensive stats? Don’t give me players are the problem. Way too many high draft picks on that defense to be this bad. That’s coaching.”

Nelsonator762 saw some positive: “On a good note, this is the best Bush has played so far.”

Let’s see if it picked up in the 2nd half

Only 894 comments in the 2nd half. Well below the standard. Someone pointed out that when Steelers fans have nothing to complain about, they just sit and pout silently.

Yours truly, actually got the top comment this week: “This is the way Steelers games are supposed to be.” Do you agree?

Nunya was pleased to report: “Most effort I have seen all year.” Adding, “Speaking for myself, I would have much rather watched the ceremony (Hall of Honor) on the field than whatever the hell that halftime show was.”

WB Tarleton focused on the youth of Mason Rudolph: “I know everyone will complain about no deep passes, but we have a redshirt freshman QB growing into the position. Ben had trouble throwing the deep ball on the Bengals too. 123.2 rating in the first half. That’s good news, people.”

Steelers Nation needed this one. While the Bengals are a weak team; they will win some games this year. The Steelers defense showed that it can play dominant football when all the units are in sync and miscommunications are minimized. The offense showed some originality and the offensive line kept Mason Rudolph upright. Part two of the test will be more difficult. John Harbaugh has never had a problem getting his team geared up to play Pittsburgh. The Baltimore Ravens will be seething after being humiliated at home. Can the Black & Gold put on another defensive display on and uncork some new surprises on offense? It’s a short week and can’t wait to see how the Steelers do this coming Sunday.

I always like to offer a music selection. Here is It’s a Beautiful Morning by the Rascals. Tuesday should have been a wonderful morning for Steelers Nation.