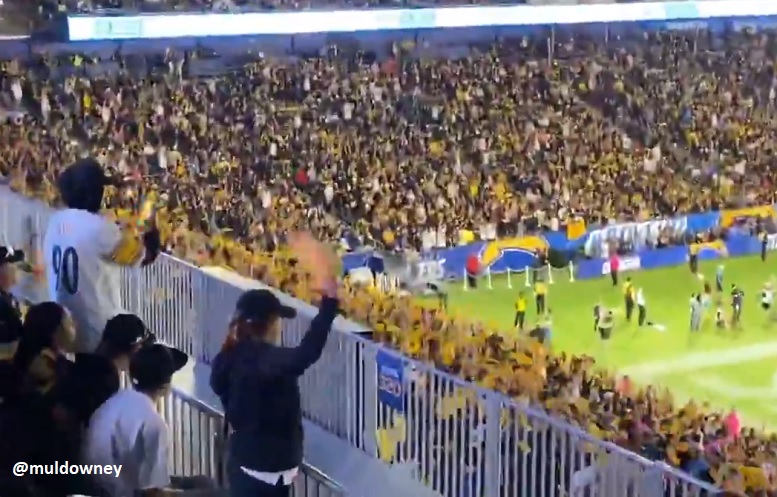 Somebody at Dignity Health Sports Park in Carson, CA thought it would be a great idea to pull a fast one Sunday night by beginning to play the song “Renegade” by Styx later in the second half of the game between the Pittsburgh Steelers and Los Angeles Chargers only to interrupt with a Rick-Roll attempt, which is the sudden and unexpected playing of Rick Astley’s song, “Never Gonna Give You Up.” That brilliant idea might wind up costing somebody their job.

Even though just a small part of the intro to “Renegade” was played Sunday night before it was interrupted by the other prank song, it was long enough to fire up the extremely large contingent of Steelers fans that showed to watch their team play the Chargers in a soccer stadium that holds less than 30,000 people. As you can see in the video below, the Steelers fans were very boisterous once Renegade was played.

After the Steelers beat the Chargers 24-17, several of the home team players even wondered why somebody would attempt to pull off such a joke.

“It was crazy,” Chargers running back Melvin Gordon said, according to Jeff Miller of the Los Angeles Times. “They started playing their theme music. I don’t know what we were doing — that little soundtrack, what they do on their home games. I don’t know why we played that. I don’t know what that was. Don’t do that at our own stadium … It already felt like it was their stadium … I don’t understand that.”

“We’re used to not having any fans here,” Lamp said. “It does suck, though, when they’re playing their music in the fourth quarter. We’re the ones at home. I don’t know who’s in charge of that but they probably should be fired.”

“This was wild,” Foster said. “I almost feel bad for them on the other side. They’re pros and it’s supposed to be a home crowd for them.”

Steelers fans have a long history of being known for traveling well due to the fan base being spread heavily all throughout the United States. The Chargers playing in a makeshift stadium well outside of Los Angeles also probably didn’t help matters Sunday night when it came to a fan takeover. It was funny to see, however. It really felt like a Steelers home game Sunday night.

“Man, that’s Steeler Nation, they definitely came out and showed out tonight,” Steelers running back James Conner said during a post game interview on SiriusXM NFL Radio. “And they were a huge part of the reason for victory tonight. So, it was really awesome to see that stadium with a whole bunch of Terrible Towels.”