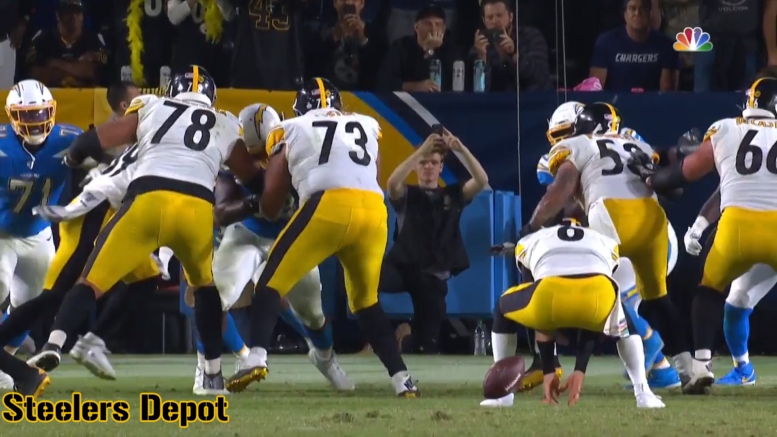 One of the most unusual aspects of last night’s game for the Pittsburgh Steelers was the perplexingly difficult time that veteran center Maurkice Pouncey had snapping the ball at times against the Los Angeles Chargers. I don’t know if that had anything to do with Devlin Hodges and the fact that they had never really worked together before, but the thing is the problem was the mechanics of the snap itself and not the exchange.

There were several snaps throughout the night that were off the mark, and which caused Hodges to make adjustments and use range to field the ball cleanly, but the rookie quarterback handled those situations deftly.

Most notable was one play in which the ball was snapped high and to the right, intended as a running play to Benny Snell. Hodges had to double-catch it, if I recall, before bringing it down, and Snell showed awareness and patience to wait for the ball and continue the play as normal.

But the play everyone will be talking about when it comes to this topic was the one with 8:22 to play in the third quarter. It was third and goal from the two when Pouncey skidded the ball low, and it squeaked well behind the line of scrimmage.

Hodges was able to track it down and scoop it up, surveying the field and identifying that he would have the ability to throw the ball away and preserve the field position. It was a very heads-up play for an undrafted free agent making his first career start, and it impressed the 10th-year center.

“He looked like Ben” tracking the ball down, Pouncey told Brooke Pryor of ESPN about the play. “I told him, ‘I appreciate you, man’. I was up there, talking trash, and he hurry-up snapped it. I was like, ‘oh crap’. But he did a hell of a job of getting that ball and throwing it out. I honestly thought in my head, ‘that’s Ben’. Ben would’ve done the same thing. It was awesome”.

That was certainly the worst of his snaps, but it was far from the only one. He really had about a half dozen or so snaps that were notably off the mark and caused Hodges to adjust in some form or fashion, but only the one completely ruined the play.

It was probably the worst snapping performance we’ve ever seen from Pouncey in terms of the sheer number of sub-par snaps, and I don’t have any explanation for it. He’s not dealing with any kind of injuries that we’re aware of. Just an off night.