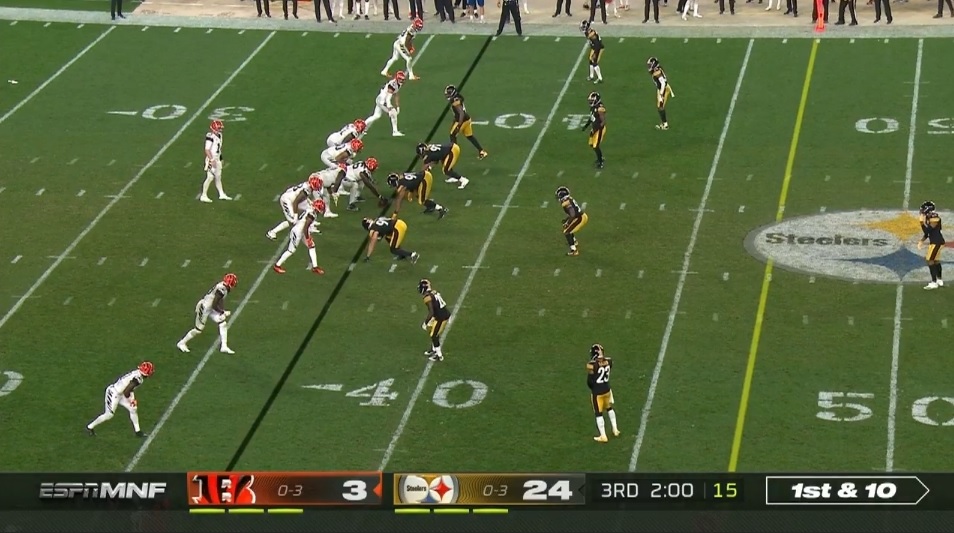 Throughout the Pittsburgh Steelers season I will be doing a weekly piece on an intriguing matchup to watch for each game. The focus will be on choosing an important battle for the upcoming game and give you some background information that could be something to keep an eye on come game time.  For example, it could focus on key players on each team that will be going head to head or how a defense will try to stop a specific player.

It is Baltimore week and that is usually one of the most physical weeks of the year.  There are many new faces on both sides but that really doesn’t matter. There is not a lot of love between these two teams and we wouldn’t want it any other way.

They will run it in a variety of ways as well. They’ll try different runs in power and zone schemes and they’ll adjust to whichever is working better.  There is a strategy to their play design especially out of 11 personnel. Strategy is good but execution is what makes it great.

The Ravens have run out of 11 personnel (70 times) as much as they have out of every other personnel combined (70). Watching the film from their last 2 games you can see the reasoning behind it.  The idea is to get the opponent to bring out their nickel defense and then use alignment and motion to try to force the smaller defenders to make the tackles.

They will line up the lone tight end either on the wing, slot or the backfield and use him as lead blocker in a variety of ways.

Vs Cleveland, 11 personnel, Lamar Jackson (8) after seeing the defense, is going to adjust the play moving the tight end Nick Boyle (86) to the right slot. Boyle will start in motion to the left and he’ll be joined by the pulling RG Marshall Yanda (73) to become a 575 pound pull-dozer. Boyle is going to block Mack Wilson (51) and Yanda takes out DE Olivier Vernon (54). The LT Ronnie Stanley (79) will climb to take out Joe Shobert (53). That leaves the running back Mark Ingram (21) one on one with safety Jermaine Whitehead (35).

Vs Cleveland, 11 Personnel, the tight end is going to motion to the left and he is supposed to kick out Myles Garrett (95). The center and left guard have the man across from them. Yanda and Stanley are looking to chip to the inside and then climb to the two linebackers. Whitehead, who was in the slot over the tight end, is now left to be the man to fill the hole and make the play.

Vs Kansas City, 11 Personnel, the wide receiver is going to motion to the left and this is going to adjust the defensive backfield. The safety, I believe it’s Tyrann Mathieu (32) is going to rotate up to the slot while the deep safety Juan Thornhill (22) is going to rotate to shade to the motion side. DB Kendall Fuller (29) who was over the tight end is going to rotate back. The play is going to be a Zone run and with all that movement Baltimore ends up with a hat on hat leaving Fuller to try to take down Gus Edwards (35) one on one. They ran this at least a half a dozen time with repeated success.

Vs Cleveland, 12 Personnel, Cleveland is still in nickel. The TE is going to shift from the wing to the backfield.  Cleveland has 8 guys in the box.  At the snap the TE is going to come across the formation like he’s going to kick out the Edge for Ingram to go up the middle. Instead he becomes the lead for Jackson around the outside. Another impressive play design where the Ravens have a hat on a hat in front of the runner and a DB needs to make a play.

When the Ravens go with 11 personnel, if the Steelers counter with Nickel, I think that could put the onus on three possible players.

Mike Hilton – Coming off a great game on Monday night where he was “That Dude” and in my Ten Takes I described him as a linebacker in a defensive backs body, Hilton is the obvious choice to talk about first. When the Steelers play in Nickel he and Cameron Sutton are the two guys who play the Nickel corner positon. Sutton gets most of his opportunities on third down where Hilton is the choice on earlier downs. Despite his size, Hilton has no fear, mixing it up close to the line of scrimmage. He has 2 tackles for a loss this year and 14% of his career tackles are behind the LOS.

Terrell Edmunds – Since the acquisition of Minkah Fitzpatrick the Steelers have been using Edmunds more down in the box. If the Steelers go with a single high coverage in Nickel both Edmunds and Hilton would likely be near the line of scrimmage. Edmunds has a more size and would match up with the size or the Ravens running backs. I would expect both of these guys to be put in these situations by the Ravens.

Mark Barron – This is a possibility if, and it might be a big if, the Steelers go with a Big Nickel package with 3 linebackers. This is assuming Vince Williams will be back this week. You play Bush and Williams in the 2 linebacker spots and let Barron be the rover to play over the TE. Fitzpatrick could be used more in coverage in the slot and Edmunds would play the deep safety.

It’s obviously going to take more than the guys mentioned. It’s going to take the entire defense to stop this running attack.  You need penetration by the defensive line to disrupt the running lanes. You need Devin Bush to continue his growth and hopefully a healthy Williams will be a boost.

The Ravens worst running game so far was last week when they ran for ONLY 173 yards. For comparison, the Steelers have 258 rushing yards for the season.

It’s not going to easy. But then again it rarely is when these two face off.