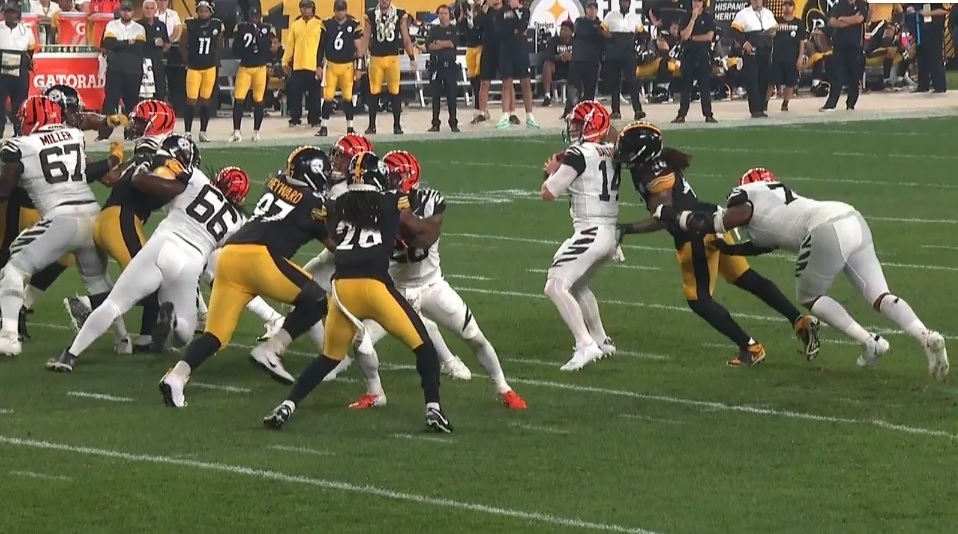 1. Mark Barron is Frustrating – His level of play is so up and down. I saw him make tackles near the line of scrimmage vs the run, getting outside to make a tackle on pass and get an interception. At other times he looks like he just going through the motions.  He got juked by Tyler Eifert in press coverage in the red zone and nearly forgot to touch down a receiver after a reception later in the game. The last two games he has been viewed lazily running around on defense.  There’s still time to make corrections but this is looking like a poor free agent signing.

2. Expected Pressure – From the preseason to now the Steelers have done a good job getting pressure. Tonight was a night I expected them to have a good game. First round pick Jonah Williams had to have shoulder surgery before the season. OT Cordy Glenn is in concussion protocol. They had a couple guys retire before the season and it showed.  The Steelers had 6 players get in on 8 sacks. Throw in 9 tackles for a loss and 12 QB hits. It’s good to see a group perform as well as was expected.

3. Running Game was Better, Right? – The offensive line did a better job overall. David DeCastro stood out on a few plays getting to the second level to make big blocks.  They mixed it up in the backfield getting Jaylen Samuels more involved and he had a rushing touchdown. However, if you look at the stats for the running backs you see 22 carries for 69 yards.  James Connor averaged 4.2 yards per carry, Samuels averaged 2.6. Not that impressive as a group. There is still work to be done in this area.

4. Creativity was Created – I will preface this by saying I am not a fan of the Wildcat/direct snap type plays. However, I was happy to see it because I was happy to see ANY type of creativity in the offense. On top of that they had success using it with tap passes and got Samuels touchdown run out of that formation.  Now because of the success they had are they going to over use it? We’ve see this offense do that before going back to the well too often.

5. Diontae Johnson Makes Me Anxious – This is not a knock on the rookie. I like his contributions so far and expect good things in the future. He has a couple drops this season and had a fumble tonight. Those he’ll learn from. However, when he catches shorter passes he has a way of jumping back toward the QB before turning and getting up field.  Maybe he’s just working back to the ball but I get anxious and yell at him to get going in the right direction.  Tonight on his touchdown he jumped for the pass when it didn’t seem necessary. Hopefully I’ll learn to trust these little things but right now they make me nervous.

6. Vanimal: Part 2 – Welcome aboard, Nick Vannett. You have to give him credit for just arriving this week and being thrown into the mix. He showed good presence blocking inline, made a nice block down field on Connor’s touchdown and made plays in the passing game. He had two catches for 28 yards including a tough catch working back to the ball.  A nice debut and could make 12 personnel (The Vanimal Package) an interesting option when Vance McDonald gets back.

7. Washed Out of the Offense – Where have you gone, James Washington. The game plan was clearly geared toward the running backs tonight but Washington was for the most part, relegated to blocking duties.  He only received one target and so far through 3 games he has 6 receptions on 15 targets for 88 yards. 45 yards came on one play!  I think we were all expecting more with Mason Rudolph at QB but it hasn’t manifested just yet.

8. Wrapping is Lost Art – This is a get off my lawn comment but I’m old enough to remember when defenders used their arms when making a tackle. Way too many times did I see guys diving or lunging at players and try to use force to knock down runners only to see the runner bounce off and keep going.  Gentlemen, please use your arms to wrap them around the player to make the tackle. It may not get you on the highlight reel but it will keep you off the missed tackles list.

9. Mike Hilton is a Linebacker – Unfortunately he has a defensive backs body. I remarked to Alex tonight that I wish I could put 30 pounds on him and play him at linebacker. He does such a good job against the run and pound for pound may be the most physical tackler on the team.  And he actually is one of the few who will wrap up with his arms. Five tackles, one for a loss and 2 passes defensed. I’ll take him on my team any day.

10. Tempo near the 2 Minute Warning – There was less than 6 minutes left in the first half and the Steelers put together and nice drive. They used a nice mix of run and pass and were moving the ball well. 13 yard run by Samuels, an 8 yard pass to JuJu Smith Schuster and then and 11 yard run by Connor.  When that play ended there was about 2:20 seconds left on the clock. Its first down, you’re at the 14 yard line and you have the Bengals on their heels.  Get up there quick and run another damn play before the 2 minute warning.  They let those 20 seconds run off the clock and the drive stalls leading to a field goal. Maybe they want to be safe with Rudolph there but this team has never had that killer instinct to step on the throat of another team when they have them down.