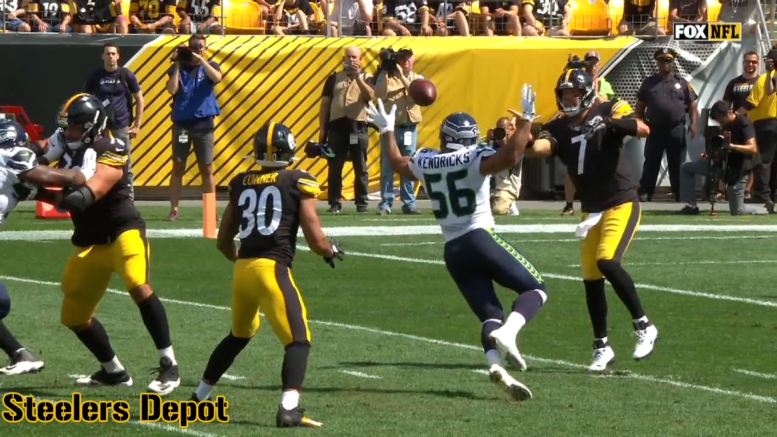 So far through the first six weeks of the 2019 season, Pittsburgh Steelers running back James Conner holds an interesting distinction. According to one reporter who asked him about it yesterday, the third-round man leads the NFL in catch percentage, presumably as measured by a minimum number of targets.

Conner has 26 receptions on the season, which is actually more than anybody else on the Steelers. That’s nowhere near the top of the NFL, though. Michael Thomas of the New Orleans Saints has 62 receptions, made all the more impressive by the fact that Drew Brees has been how most of the year so far.

Thomas has caught an impressive 80 percent of the passes that have come in his direction. But that doesn’t even crack the top 25 among those with at least 15 targets. Conner is at the top of that list. His 26 receptions came on just 27 targets for a catch percentage of 96.3. Only Los Angeles Chargers running back Austin Ekeler, who has caught 49 of 53 passes in his direction, is also above 90 percent.

“It’s something that I work on”, Conner said of the pride he takes in being successful in the passing game. “I try to be a complete back. I wish we won a couple more games. The stats and stuff like that are nice, but I’ve just got to continue doing my job and try to do it well”.

Conner has 231 receiving yards on the season with two 75-plus-yard receiving games. He has scored two touchdowns on receptions, which is tied for the fifth-most among running backs. And there’s more that he can do in the passing game going forward as the offense continues to get settled under Mason Rudolph.

The back acknowledged the increase role of his position in the passing game, saying that it’s about “just being able to have another playmaker rather than a guy who wants to just run between the tackles, being somebody that you can have out for a passing option. The more you can do. Coach T always talks about ‘don’t minimize your role’, so just trying to be the best back I can be”.

Though he didn’t do much of it in college, or in his rookie season, Conner has proven to be much more able in the passing game than was thought during the draft, as he has shown surprisingly sure hands and an impressive ability to make people miss in the open field at times.

For his career, he now has 81 receptions for 726 yards and three touchdowns. He caught 55 passes for 497 yards in 13 games last year. So far this season, he is on pace to catch 77 passes 616 yards, but it wouldn’t surprise me if the former rate slows down a bit and the latter picks up, provided that he stays healthy.