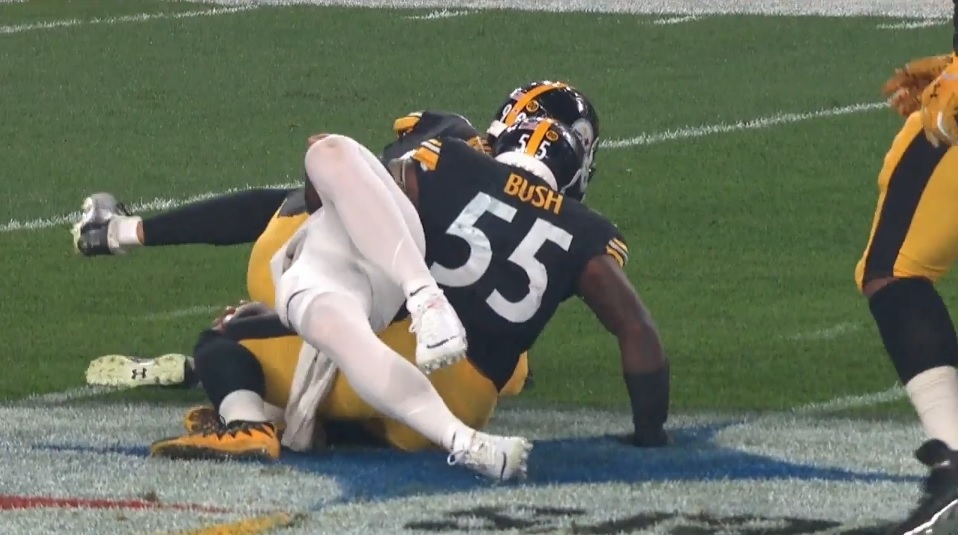 Hey, why would he? That’s where he’s been his most dominant.

Sitting down with Steelers.com’s Missi Matthews, Bush said Monday night and primetime games are his favorite ones to play in. Beyond the logistical elements like having more time to rest, he prefers to have all eyes on the black and gold.

“You’re the only game on,” he told Matthews.

Bush has shined in those marquee matchups. On Monday night against the Cincinnati Bengals last month, he recorded nine tackles, three for a loss, and notched his first NFL sack. Two weeks later on Sunday night against Los Angeles, he picked off a pass and scooped and scored on a Chargers’ fumble.

For the year, he’s up to six takeaways, the most in the NFL of anyone, not just rookies. So far though, none stick out above the rest. He’s still waiting for *that* kind of memorable play.

“Honestly, all of them are kinda special to me in different ways and different situations. I don’t have a favorite one yet.”

The “yet,” as Matthews followed up on, implied he plans on forcing a whole bunch more.

Consider this. In his three years at Michigan, he had just one takeaway, a lone interception his sophomore season. But the athletic traits and football instincts were always evident and playing in the Steelers’ scheme allowed him to play faster with more freedom and a focus on taking the ball away.

Comparisons to Ryan Shazier have been overdone but it’s a similar story to Shazier’s coming out of Ohio State. An underclassmen, bit of a raw player, who wasn’t super productive in school. But once he fit into Pittsburgh’s system and got a big of experience and NFL coaching under his belt, he became the team’s best playmaker. Bush is on track to do the same.