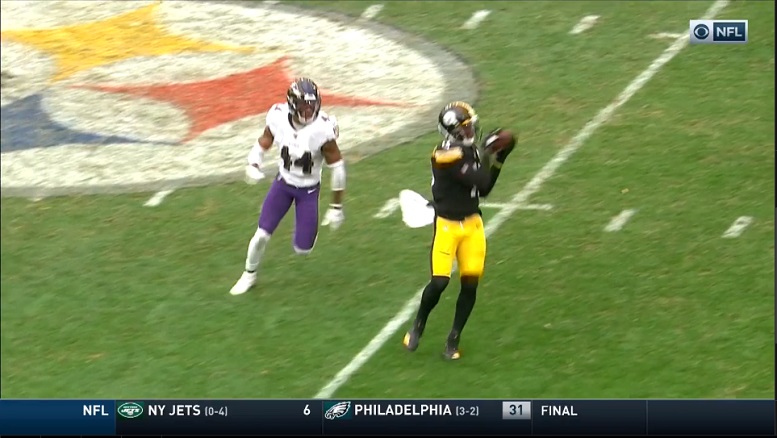 Pittsburgh Steelers rookie quarterback Devlin Hodges made his NFL debut in the second half of the team’s Week 5 home loss to the Baltimore Ravens and the undrafted product out of Samford completed seven of his nine pass attempts for 68 yards. With Hodges now likely to make his first career start Sunday night on the road against the Los Angeles Chargers, it;’s time to contextualize and break down all 12 of the passes that he threw against the Ravens.

Hodges first pass attempt of his NFL career was to wide receiver James Washington on a quick out route and it was incomplete. However, Ravens cornerback Brandon Carr was flagged for pass interference as it looks like he may have hooked Washington out of his break. The pass appeared to have been on target for Washington had he not been hooked.

Hodges’ next pass attempt was also incomplete to Washington on an underneath crossing route and this play really was a peculiar one. First, Washington collided with guard David DeCastro as part of a screen play. As he continued on his route, Washington appears to let up slightly. Additionally, it’s hard to tell, but Hodges’ pass may have been slightly tipped at the line by the Ravens defensive lineman. Could Hodges maybe have gotten the ball out a tad quicker? Maybe, but the whole timing of the play seemed to be thrown off when Washington collided with DeCastro. This was also the play that Washington injured his shoulder on.

Hodges’ next pass attempt, a boundary side comeback route to rookie wide receiver Diontae Johnson, was a great throw. After catching it, however, Johnson had the football knocked out of his hands by Ravens cornerback Maurice Canady. Personally, I was surprised this was ruled a catch.

The next pass to tight end Vance McDonald on 2nd and 6 inside the red zone was a great play call and well executed by all. Just a misdirection play with Hodges booting out to his left and McDonald coming across the formation to leak out into the flat. The throw may have been a little low, but that’s it. Once again, nice completion.

Hodges’ next throw went to wide receiver JuJu Smith-Schuster via a Yankee concept. Hodges probably should have gotten the ball out much quicker than he did and as Smith-Schuster clears the middle zone defender. It was still a completion, but the football was thrown behind Smith-Schuster and that forced the wide receiver to make a great catch.

The next attempt by Hodges was an ill-advised throw to tight end Nick Vannett by the young quarterback after he had extended the play outside the pocket to his right. Hodges threw across his body and on the run and the wounded duck was easily intercepted by safety Earl Thomas. Thankfully the Ravens cornerback Tony Jefferson was flagged for defensive holding on the play and the interception was negated. Had Hodges wanted it, he had wide receiver Johnny Holton open quickly underneath in the middle of the field for a small profit on 2nd down. Had there been no penalty, this could’ve been a disastrous play for the Steelers as Thomas returned the football to the Steelers 35-yard-line.

Hodges’ next pass attempt, an in-breaking route completion against the blitz to Smith-Schuster, was right on the money.

Hodges’ next pass, a deep shot down the field to Johnson on a post-corner route, is one that really had no shot at being completed and probably should’ve been intercepted by Canady, who did a great job of continuing to add depth in his third of the field with just one safety deep in the middle. I’m not sure what Hodges saw on this route, but he probably had a tiny better shot at Smith-Schuster underneath. Had Johnson not pushed Canady at the end of this play, this pass may have been intercepted in the end zone. The pass interference penalty on Johnson was too tough to overcome and the Steelers punted after failing to convert on their next two plays.

On 2nd and long, the Steelers tried a quick angle route pass to running back Jaylen Samuels on the left side and he dropped it. He took his eyes off the ball at the last minute and his had placement probably also want ideal. Samuels still would’ve been hard-pressed to gt much yardage had he made this catch so a third and long was likely on tap.

This was the third and 17 pass play that included Hodges completing his pass attempt to Johnson underneath on a quick crossing route. The Ravens defense gave the underneath area to Hodges and he took it and you can’t blame him. The pass was on the money and had Johnson managed to run for a first down after the catch, the play would’ve been wiped out by a holding penalty on guard Ramon Foster. Not too much to see here.

This next completion from Hodges to Samuels went for a loss of 2-yards and mainly due to a nice play by Ravens dimebacker Anthony Levine. Hodges floated this pass out to Samuels to the left and essentially dropped it right in the bucket. Had or McDonald or Johnson been able to legally rub off Levine on this play and made the Ravens defensive player go over the top, maybe Samuels would’ve scored. Instead, Levine quickly read the play and had a direct shot and the lofting of the football over the Ravens defensive lineman gave him more time to get to Samuels and take him down quickly.

Another Yankee concept completion to Smith-Schuster from Hodges in overtime and this completed pass was quickly punched out of the wide receiver’s hands by Ravens cornerback Marlon Humphrey. The pas was thrown slightly behind Smith-Schuster, but still found its mark just the same. It’s a shame Smith-Schuster fumbled this football because the Steelers offense may have had a shot to win the game a few plays and about 15 yards later.

Summary: For an NFL debut, Hodges certainly passed the eye test against the Ravens. He pushed the football down the field and for the most part, was accurate with a high percentage of his throws. As you would probably expect with a rookie undrafted quarterback in his first official NFL action, Hodges was far from perfect on Sunday. He had two pass attempts that probably should have resulted in interceptions. The one that was intercepted could’ve have been disastrous for the Steelers had the platy not been wiped out by a defensive holding penalty. Did Hodges see the flag thrown on that play prior to throwing the football up for grabs? I doubt it based on the all-22 view.

There were a few throws that Hodges probably should’ve got the football out quicker on but with the limited amount of reps he’s likely been getting practice and with Sunday being his NFL debut, that is understandable. Once again, Hodges did represent himself very well on Sunday against the Ravens and if not for Smith-Schuster fumbling in overtime, there’s a decent chance we could be talking about a Steelers win this week and them also now leading the AFC North division.

We’ll now sit and wait to see how Hodges performs in his first career NFL start Sunday night against the Chargers. He certainly seems to be fearless and not afraid to push the football down the field.

Below is Hodges’ full passing chart from the Steelers Sunday loss to the Ravens via NextGenStats. 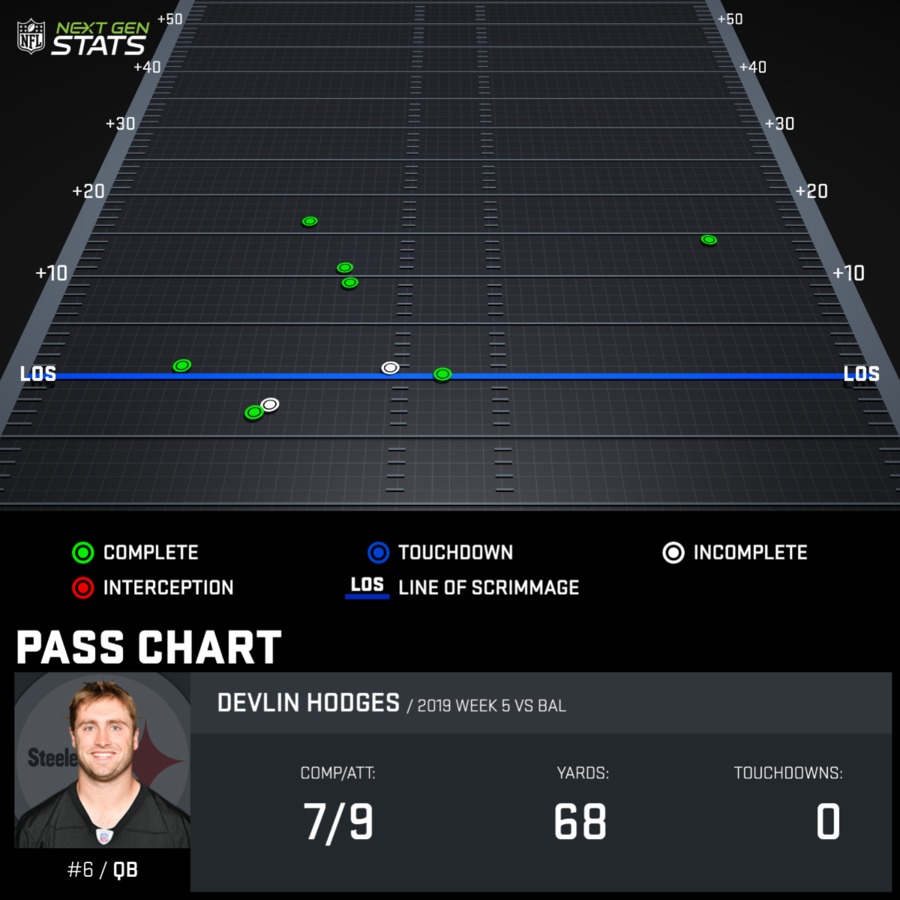