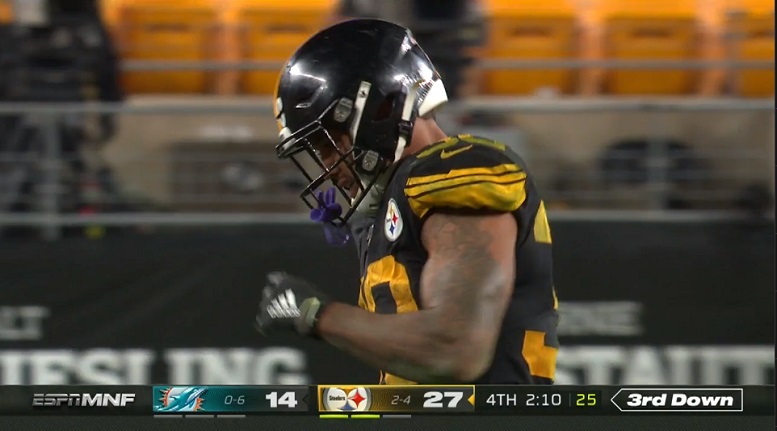 After suffering a shoulder injury late in the Monday night game against the Miami Dolphins, the status of Pittsburgh Steelers running back James Conner for the team’s Sunday home game against the Indianapolis Colts is very much in the air on this short week. On Tuesday evening, Conner addressed his recent AC shoulder injury during his weekly interview on 93.7 The Fan.

“Well, with these injuries, it’s going to linger for a little while, that’s to be expected,” Conner said. “So, it’s just kind of something that I just have to play through. If I can do my range of motion, get a little bit of strength back, you know I’m going to tough it out and be available for the team. Got to make the best decision, but, yeah, it’s a good sprain on it.

“Just got to take it day-by-day and see how I’m feeling. Hopefully every day we get just a little bit better and if I feel I can go, no question I’m going to go. But if not, I’m going to do what’s best for the team and have somebody that’s healthy out there and able to perform.”

Conner went on to ensure everyone that the shoulder injury he suffered late in the game against the Dolphins will not end his season but that he’s also unsure right now if he’ll be able to play Sunday against the Colts.

“So, everything is looking positive,” Conner said. “There’s not going to be nothing season-ending or nothing like that. So, I just want to get better every day and try to be available for Sunday hopefully.”

Conner, who is unlikely to practice much, if any, this week, also let be known Tuesday evening that he promises to be honest with himself and the team concerning his overall health come Sunday. In fact, Conner said Tuesday that whether or not he plays Sunday against the Colts might depend entirely on how he feels 90 minutes before kickoff of that contest at Heinz Field.

“It will probably be a game-time decision, but I have to be honest with myself,” Conner said. “And if for any reason I wasn’t out there, it would hurt, but I know I would be able to be all right knowing that it would be the best for the team.”

Fellow Steelers running back Benny Snell Jr. also begins this short week as questionable for Sunday’s game against the Colts due to a knee injury that he suffered during the second half of the Monday night game. Should Conner and Snell both wind up being unable to play, Jaylen Samuels, who has been sidelined the last two games with a knee injury. would likely start against the Colts and he would be backed up by Trey Edmunds, who has all of one carry as a member of the Steelers and that came late against the Dolphins after Conner left the game with his shoulder injury.

The Steelers also currently have Tony Brooks-James on the practice squad, and it will be interesting to see if he winds up being signed to the 53-man roster come Saturday at 4:00 p.m. EST.