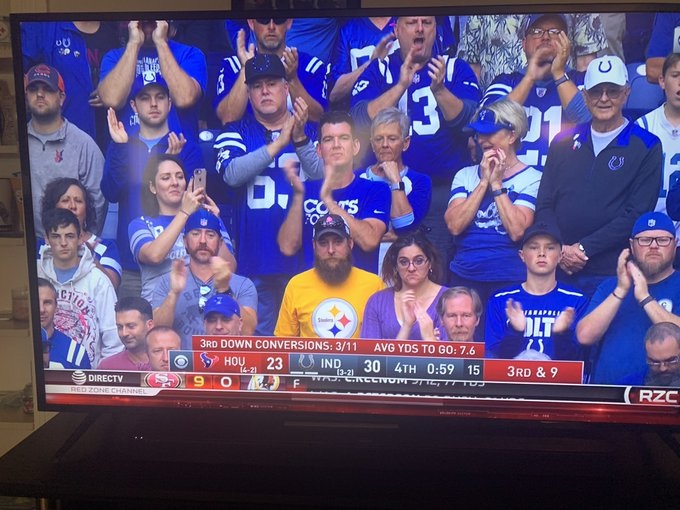 Steelers Nation, as they typically do, made their presence known in last Sunday’s win over the Los Angeles Chargers. To the point where it felt like 70% of those attending were wearing black and gold. It got to the point where Chargers’ players openly talked about how disappointing it was to play a home game that felt like a road matchup but also how grateful they were to play in front an energized crowd, even if it was one rooting against them.

And Steelers Nation showed up again this weekend, even with the team on a bye. Thanks to this lucky camera shot, there was a lone fan repping Pittsburgh for today’s Texans/Colts game. Take a look.

I’d love to know the background of this guy but unfortunately, I doubt we’ll be getting any answers. Still, a cool moment and one of the countless examples of how dedicated Steelers Nation is.

In January, the Steelers were ranked as having the NFL’s #1 fans. At the time, our Matthew Marczi wrote:

“Both pro and college ball were considered, with professional being weighted at 75 percent to college’s 25 percent. Among the metrics considered for professional football were the number of Super Bowls, division titles, Hall of Fame head coaches, ticket price, fan engagement, attendance, stadium capacity, and popularity index.

As mentioned, all of these factors and more were tossed into a blender and out was spit the hometown of the Pittsburgh Steelers atop the list, ranked as the number one city overall and for professional football, as well as 13th in the college football rankings.

In fact, the city of Pittsburgh stood head and shoulders above the rest, earning a total score of 63.49, while all other teams fell significantly short of that mark. Boston finished second with a total score of 55.24, while Green Bay placed third with an even 55. Dallas and New York rounded out the top five.”

Our David Orochena was recently profiled by Steelers Nation Unite, showcasing his Terrible Towel tour all over the globe.

The Colts, by the way, hung on to beat the Texans 30-23. Pittsburgh will host Indianapolis on November 3rd for what is likely to be another critical game in the Steelers’ season. And I hope this guy is able to fly in and be surrounded by by plenty more of his fellow fans.