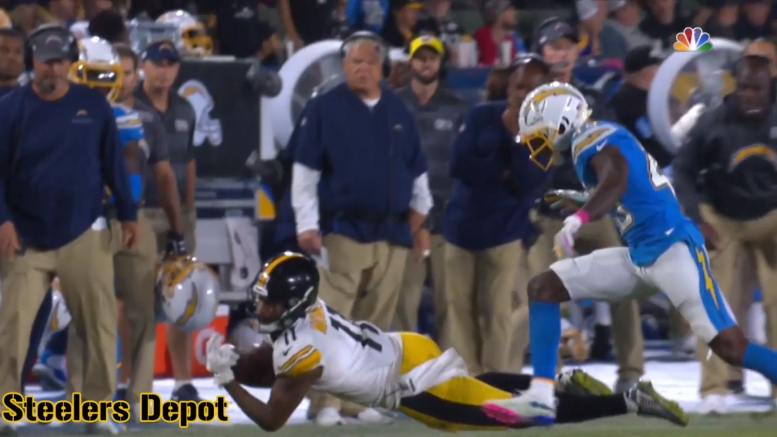 It may not have seemed like much, but the 11-yard reception that Donte Moncrief made in Sunday’s game was a big one, more so for himself than for the team. It was his first catch since Week Two, during the first game in which he got playing time in Week Two, and the first positive play he’s turned in since joining the Steelers as an unrestricted free agent in March.

Beginning the year as a starter, it didn’t take long for Mike Tomlin to demote and then bench him after he caught three of 10 targets for seven yards in the opener, dropping at least three passes, and then again dropping the only target that he had a week later.

He was inactive for two of the three games that followed, only dressing because of injuries, but with James Washington down for a few weeks, it’s Moncrief’s opportunity to ride the boomerang back into relevance.

Sunday’s game was that first opportunity, and the mere fact that he recorded a positive paly is, sadly enough, a significant improvement upon his fortunes. For what it’s worth, he said a month ago that he felt just getting that one reception under his belt would be a big help.

The Steelers are on their bye week this week, but it will be interesting to see if they try to work in a bigger role for Moncrief going forward on the other side of the bye week. It really could depend upon how Mason Rudolph feels about working with him.

When Rudolph was first thrust into the lineup, Tomlin said that a consequence of that could be more playing time for Washington, but now that the second-year wide receiver is going to be out for at least one more game, and potentially more, the opportunity exists for somebody else to make up ground. That somebody is Moncrief, but he has to make the most of every rep, even in practice.