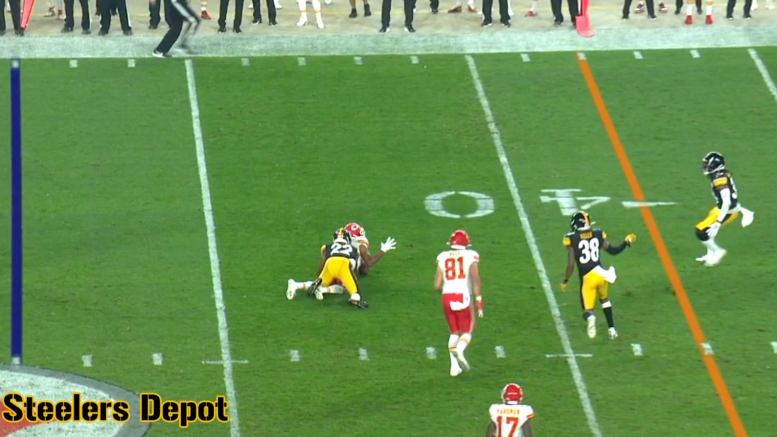 Steven Nelson, the fifth-year cornerback who was the Pittsburgh Steelers’ major free agency acquisition back in March has had a pretty low profile since he’s been on the team. Not because he hasn’t been making any plays—he had a couple of interceptions in training camp, for example—but just generally speaking, he hasn’t gotten a lot of press.

He was held out of the first preseason game, but he made his debut last night with the Steelers, and it happened to come against his former team, the Kansas City Chiefs, for whom he played during the first four years of his career.

“It was awesome”, he said of the experience, according to an article from Chris Adamski of the Pittsburgh Post-Gazette. “To suit up and with a new team and new atmosphere, man, definitely even playing against my old team, it was fun. Good experience”.

With Joe Haden nursing an ankle injury, Nelson started on his right side, where he’s expected to open the season, and worked across from Artie Burns, who was injured at the time of the first preseason game. That game, it was rookie third-round pick Justin Layne and Cameron Sutton who started, and at least in the case of the former, it was evident.

With Nelson and Sean Davis injected into the starting lineup, and with Burns coming back and replacing an unpolished rookie, there was a clear difference in the early-game coverage. “Definitely what you like to see”, Nelson said. “I think we took a big leap from last week”.

While the Steelers didn’t get any interceptions—and Nelson was signed in part because they believe he can contribute in that area, picking off four passes last year—the group did force and recover three turnovers. “I think we’re just gonna keep emphasizing turnovers and just try to get more each and every week”, the cornerback said of that.

An initial review of his playing time indicated a positive performance. He was targeted early, on the fourth defensive play of the game, on a pass overthrown to Tyreek Hill with T.J. Watt getting pressure on Patrick Mahomes. With was a bracketed coverage look, Nelson’s dropback tightening the window.

He was also in coverage on a throwaway in Hill’s direction, with his one statistic coming on the one target in his direction that was caught—a short five-yard pass on second down, on which he made a good tackle in the open field.

Nelson wasn’t put in positions where he had to be much of an active contributor outside of simply covering his assignments, which he appeared to do well. It would be great if we barely ever hear his name or need to think much about him this season, because it will mean teams don’t even want to throw in his direction.