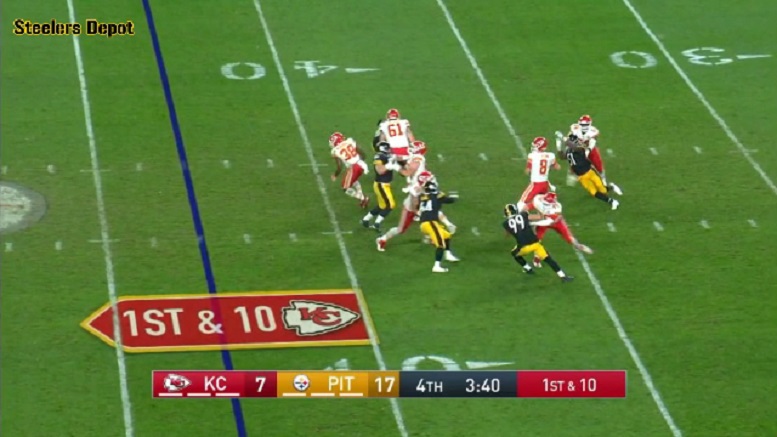 Pittsburgh Steelers rookie outside linebacker Tuzar Skipper is certainly having himself a first preseason to remember as the undrafted free agent out of Toledo has registered three sacks, and numerous other pressures in the team’s first three exhibition contests of 2019. Skipper has also been able to show his passing rushing skills on both sides of the defensive line and that’s also a plus for the young outside linebacker.

To date, Pro Football Focus has Skipper down for three quarterback sacks, three hits and three hurries and I have identified all but one of those nine plays and broken down each below. Each breakdown also includes the offensive lineman that Skipper effectively beat

Skipper’s first of three sacks this preseason came in the fourth quarter against the Tampa Bay Buccaneers and specifically against left tackle William Poehls, a career preseason offensive lineman that’s been around the NFL since 2014. At the snap, Skipper delivers a hard left punch up high to Poehls and that easily knocks the tackle off balance. Skipper then easily steamrolls his way to Buccaneers quarterback Ryan Griffin for the sack.

Late in the fourth quarter against the Kansas City Chiefs, Skipper recorded his second sack of the preseason and this one came against right tackle Dino Boyd, a rookie undrafted free agent out of Cincinatti. On this sack, Skipper utilizes a nice dip and rip move to win the edge. The coverage down the field allows Skipper time to bend the corner and attack quarterback Chase Litton from behind.

Against the Tennessee Titans, Skipper recorded his third sack of the preseason and this one came in the third quarter and against Austin Pasztor, a veteran tackle with over 40 NFL starts under his belt. Lined up as a wide-9 and outside the tight end/h-back to his side, Skipper easily beats the tackle to the edge. Pasztor had no chance on this bad angle and it’s hard to believe this protection was by design. Not to take anything away from Skipper, but even former Steelers outside linebacker Jarvis Jones would have probably won the edge on this play. To Skipper’s credit, he turns the corner and easily corrals a Titans quarterback Logan Woodside, who stayed deep the pocket. Skipper stripped the football on this sack as well and the Steelers recovered.

Against the Buccaneers in the third quarter, Skipper uses his left arm to swipe at the hands of left tackle Cole Boozer. The left tackle leans forward and flat backs a bit while reaching and it allows Skipper to quickly win the edge. Skipper flattens out quickly after a sharp corner turn and his pressure results in Griffin almost throwing an interception as he attempts to throw the football away. This was as good as a sack because of intentional grounding being called on the quarterback.

Also in the third quarter against the Buccaneers, Skipper used that quick left strike of his to knock Boozer off balance and thus off his base. The quick strike and win allows Skipper an inside lane and free hit on Griffin just after he released the football.

On this fourth quarter pressure/hit, Skipper clubs Poehls with his left arm at the snap and then beats the left tackle inside through the B-gap for a fairly easy pressure/hit.

Via a nice T/E stunt with defensive tackle Henry Mondeaux, Skipper loops to the inside and into the A-gap for a pressure/hit on Chiefs quarterback Kyle Shurmur. Obviously Skipper didn’t get home quick enough and while the pass down the field was accurate, Steelers defensive back Mike Hilton forced a break up.

Late in the game against the Chiefs, Skipper recorded another pressure via a battle with Boyd. While Boyd did a good job of finally dropping anchor a yard from the pocket, Litton got uncomfortable enough that he choose to vacate the pocket to his right. While Skipper did spin off of Boyd, it wasn’t in enough time to prevent the quarterback from gaining the edge and he easily scrambled for a first down on a 4th and 3 play.

SUMMARY: Skipper has obviously demonstrated so far through three games that he has a nice base arsenal of pass rush moves and counters. He possesses a nice first strike with his left arm, has power, can swipe, dip and rip and also quickly bend a corner and flatten out toward the quarterback. He also has ball awareness when it comes to attempting to strip the quarterback. The only downside to the eight clips of Skipper above is the quality of competition that he’s faced to date. In all likelihood, none of the tackles that he’s beaten to date will stick on NFL rosters. For those that do stick, they certainly won’t be starers. That, however, isn’t Skipper’s problem. He can only beat who is lined up against him. While Skipper may have shown enough in the pass rushing department to stick on the Steelers 53-man roster, his lack of special teams tape might prevent that from happening. At worst, Skipper should easily land on the Steelers practice squad if waived during the final round of cuts.