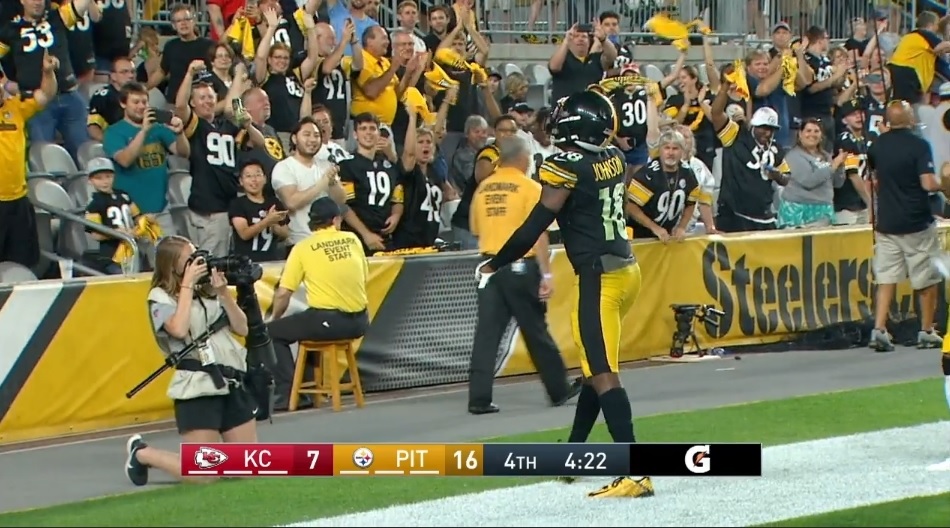 Darryl Drake’s sudden death impacted the lead up to this preseason game. The Pittsburgh Steelers organization handled his loss very well, dedicating this season to his memory by carrying his initials on their helmets. No words can comfort coach Drake’s family and personal friends. They must endure losing him. We should embrace his memory and celebrate his life. The team seems to have done just that. During pregame warm-ups, several Steelers wore shirts with one of coach Drake’s slogans, “Shut Out the Noise.”

Matthew Marczi described what we should watch for in the game against the Kansas City Chiefs. Matthew started out with Devin Bush but at the time no one knew that Mike Tomlin would hold Bush out of the game due to a shoulder injury. He wanted to see if James Washington would have an encore performance. How would Diontae Johnson look in his debut? We did know about Ola Adeniyi’s knee injury before the game, so Matt directed us to Tuzar Skipper. He also asked us to compare Joshua Dobbs and Devlin Hodges if “Duck Dynasty” got to play among other questions.

Normally, I watch every Steelers game live on the screen or in person. My middle son’s girlfriend was visiting from Japan, so family obligations prevented me from watching it live except for sneaking into the TV room to catch a few plays. She is a proud owner of a Terrible Towel, Steelers hat & scarf and possibly the only Pittsburgh fan in Mizusawa, Japan. The NFL Network’s decision to skip airing the second half of the game caused me to miss seeing the DVR recording which is frustrating. The NFL Network is re-airing the second half as I write this on Sunday afternoon but still not happy even though the kickoff was delayed for an hour.

Watching a game a few plays at a time is disconcerting. I come into the TV room, see Terrell Edmunds force a fumble that Sean Davis recovers. My cheering gets me caught and back to socializing in our house party. I make my way back to the TV a few minutes later and see the Chiefs with the ball. Did I just imagine the turnover? No, it was part of the Steeler’s erratic play in the first quarter. On the very next play after the turnover, as I was being hustled back to our guests, Mason Rudolph completed a pass to Donte Moncrief, but a defender punched the ball out of his hands and the Chiefs recovered it.

I did get to see one of Bud Dupree’s two sacks, but then missed the entire scoring drive that put the Steelers in the lead after a 14-yard Jaylen Samuels run. No, I missed that and had to watch Kevin Rader penalized for holding earlier in the game. I also made it back in time to see Mike Hilton getting beat for a long Kansas City gain and eventual score. Thankfully, I was out of the room when Josh Dobbs threw the interception at the goal line near the end of the half. That saved me from an outburst that would have been embarrassing.

I built up some good credit during halftime so figured I could catch a full drive or two. Someone must have changed the channel on me. For some reason the Dallas Cowboys and Saint Louis or is it Los Angeles Rams are on the screen.  https://twitter.com/StatsGuyDaniel/status/1162911934221561856  Nice, The NFL Network switched coverage. I go to my back-up which is listening to SNR.

Genuinely nice to hear that the Steelers did not allow the Chiefs to score on their first possession of the second half. That was a theme last season. Even better that Diontae Spencer returned a punt 38 yards. Coupled with his 19-yard run he had a couple big plays. Will the Steelers find room on their roster for this 27-year old first year NFL player?

I am worried about NFL officiating this year. The referees upheld Diontae Johnson’s second touchdown. The same type of catch that cost Jesse James a touchdown and a Steelers victory not so long ago. On the other hand, the officials also upheld a phantom offensive interference call on Johnson that Mike Tomlin challenged. Almost like an NBA make-up call. Frankly, I believe it was a catch. I also believe that Johnson did not push off on the touchdown the referees nullified. Just the way I see it.

The defense managed to shut the Chiefs out in the second half. Tuzar Skipper looked strong. It was nice to see Marcus Allen force the fumble near the end of the game. I am not sure if that is enough to keep a roster spot safe for him yet.

I did not see any of Jordan Berry’s punts. His 45.7-yard average looks rather good. Yet, some pundits are saying that the Steelers punter in 2019 is not on the current roster. What say you?

Your Comments During the Game

Steelers Depot readers commented 895 times on the game’s first half Live Update and Discussion Thread. Reader Tom White summarized his thoughts of the first half near the end of the thread. Check it out.

Among the “best” comments, Steely McBeam led the way with, “Washington is going to have a great year.” AJ Gentile liked a runner, “This is why I wanted to watch Samuels. Dude is good.”  Of course, some of the bad play was noticed. A top comment came from Mr. KnowItAll who opined, “Grimble is garbage.” Others see improvement in the defense; GrumpyHighlander saying, “LOL…we already played better D against them than we did last year…hahahaha.” & Nelsonator762’s comment “That would have killed us last year with Bostic. Thank God we got Bush and Barron”

Tom White did another nice summary near the end of the 2nd half Live Update and Discussion Thread.

Wreckless captured a lot of our thoughts about the officiating of the new challenge rules with; “Honestly, if you’re not going to overturn THAT, just get rid of the rule. Challenging PI only works to slow the game down at this point.” Mike Skinner believes “Hilton is playing safety better then Davis.” The GrumpyHighlander scored on another post with, “Look, I don’t know what the QBs look like at practice as I’m not there. Going by the two games, though, and I’m taking MR (Mason Rudolph) and Hodges easily. Mostly due to Dobbs being in his 3rd year and Hodges having, seemingly, sooo much upside.” The Intense Camel shamed the officiating and Josh Dobbs – or his critics with, “Awful call. Oh, and btw that Dobbs Td throw was like 3 inches off. That’s not gonna cut it.” Eric is definitely not in Dobbs camp, “If Dobbs could hit the easy short passes the backup sport wouldn’t be a competition. He’s killing me… Oh what a beast 1st down run for him.”

Only 507 comments in the 2nd half. I believe that the NFL Network switching coverage to the other game was a contributing factor to the decrease in commentary between halves.

I do not recommend scheduling a welcome party for a visitor when a Steelers game is scheduled. It is exceedingly difficult to give either your guests or the game the proper attention. From the little I saw and more of what I read; Mason Rudolph has emerged as the favorite to be the back-up to Ben Roethlisberger. There may be a battle for 3rd string between Josh Dobbs and Devin Hodges. Players who are not playing like Sutton Smith are running out of time to earn a roster spot. I am more of a fan of four preseason games than before. I hope the NFL does not cut the number back to increase the regular season to 18 games which will lead to a higher injury rate to starters as they ready for playoff games. The secondary has more depth than last year. I hope that translates into better pass defense during the regular season. Finally, God bless you Darryl Drake. You have left a legacy to the team and hope they follow your advice and just “shut out the noise.”

I always like to offer a music selection. Here is Shut Out the Noise by the Sol Fenne Music.