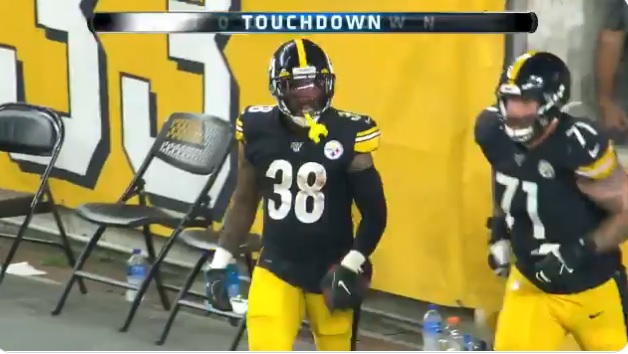 Your winners and losers from the Pittsburgh Steelers Week 2 17-7 victory over the Kansas City Chiefs.

Mason Rudolph – For the first time this summer, Rudolph seems to have a clear leg up for the #2 quarterback job. Despite a rocky start, largely to blame on his receivers, Rudolph locked in, going 7/8 for 77 yards to close things out. He showed accuracy, placement, and a lot more comfort in the pocket, allowing him to show more mobility than last season. He’s finding consistency and his groove.

James Washington – Another former Oklahoma State Cowboy with a big game. Washington has been dominant this preseason, winning vertical, attacking the football in the air, and showing ability to do damage after the catch. Speaking of driver’s seats, he should be the #3 this season and given how often this offense uses 11 personnel, he’ll play a lot.

Bud Dupree/TJ Watt – To be fair, the pairing took advantage of some of the Chiefs’ backups but both players did well against the starters, too. Watt consistently got the best of starting RT Mitchell Schwartz while Bud Dupree registered a pair of sacks and – gasp – showed the ability to turn the corner at the top of the arc. Nice debut by both men.

Tuzar Skipper – Let’s throw another OLB on here for good measure. He didn’t have to work particularly hard on his fumble recovery but I liked his ball awareness and smarts to fall on the ball. Remember, the defense botched a chance to end the game early vs Tampa Bay last week trying to scoop and score. He used a rip move to record a sack late in the 4th quarter.

Starting Offensive Line – Two starters, Maurkice Pouncey and David DeCastro, were held out and Matt Feiler kicked to right guard but the line still did a heck of a job. Think it’ll be fun to go back and comb through the tape. The best part about the first few offensive series. Ramon Foster and Feiler in particular were getting after it.

Jaylen Samuels – Samuels had a relatively quiet training camp but showed extra burst and speed tonight, a product of him losing weight this offseason. Granted, his touchdown was a walk-in, horrendous defense by the Chiefs, but he still looked like more of a threat in the open field while having enough power to step through tackles.

Diontae Spencer – Spencer flashed his open field ability as a returner and runner. He consistently makes players miss in space, chipping in a 38 yard punt return and 19 yard rush on an end around. Making the receiver conversation an interesting one. Ryan Switzer is definitely looking over his shoulder for #82.

Josh Dobbs – Dobbs made a couple nice plays tonight. Showed his arm. Created with his legs. But his issue is a lack of improvement for his weaknesses. His arm and mobility is what got him drafted but he hasn’t been able to build on that. He remains scattershot and his accuracy on underneath crosses continues to be a mess. That led to his red zone interception, a killer at the end of the half. Rudolph’s playing well and has emerged ahead of Dobbs to be Big Ben’s backup.

Mike Hilton – Hilton did have a nice 2nd half breakup while playing free safety but he got beat twice down the seam in the first half, the latter giving up the first score of the day. Still had a nice camp overall and I’m not worried but not his strongest showing tonight playing slot corner.

Donte Moncrief – Moncrief’s first reception as a Steeler was a forgettable one. Fumbled away right after the Steelers’ defense forced a turnover. His role hasn’t changed but not a play that’ll be included on his highlight reel.

Brian Allen – Allen critically needed a good performance, outside-looking-in and missing the opener vs Tampa Bay. It didn’t happen. He made an aggressive move on the first series of the 2nd half but missed a breakup and then missed a tackle on a flare to the tight end a few players later. I don’t see a path to the 53 and in his third year with one career defensive snap, not much of a point in holding him on the practice squad.

Kevin Rader – Rader caught everything thrown to him tonight which was good considering all the drops he dealt with at camp. But two holding calls, one that negated a 4th and 1 pickup, will leave a sour taste in your mouth. His best trait is a blocker and tonight didn’t help.