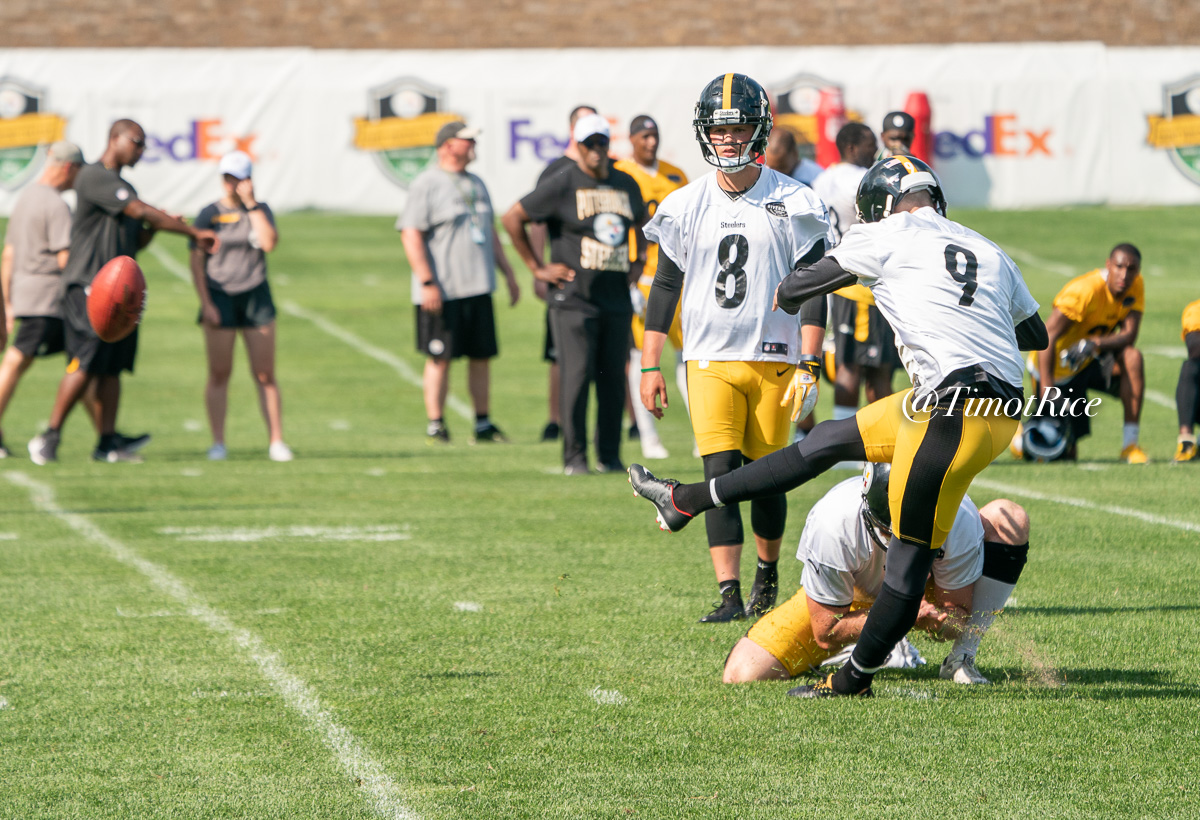 In this corner, standing in at 6’2, 185 pounds, from Rice University, Chris Boswell.

In the other corner, standing in at 6’2, 185 pounds, from Rice University…also Chris Boswell.

That’s the kicking battle for the remainder of the preseason. Boz v Boz.

I mean no disrespect to rookie UDFA kicker Matthew Wright. You know I get as geeked about specialists as anyone and Wright seems to have an accurate leg and a bright future. He may perform well this August. But the kicker battle between them, if it ever existed in the first place, is over. Wright has a limited leg, you don’t want him trying anything 50+, and that simply won’t work in the NFL.

Throughout camp, Boswell has gone an impressive 19/20. Wright just 14/19. Not where it needs to be in an “easy” setting like Latrobe. No rush. No bad weather. Not nearly as much pressure.

So Boswell has taken the first step. But the battle is far from over. He has to still win the job. That means kicking well the rest of camp, being near-perfect in the preseason, while still showing consistency on kickoffs. Because he’s not just battling himself. He’s battling the rest of the league. Kevin Colbert confirmed as much in recently discussing the kicker battle.

“Until we get out into the preseason and regular season, we won’t know if he’s coming out of it,” he told The Fan in late July. “So we better be prepared. And we have competition here and we’ll also be watching what’s going on around the league with other kickers.”

The Steelers, Colbert also confirmed, will have scouts at every preseason game. Meaning should Boswell struggle, the team won’t hesitate to find another option. That’s how they found Boswell in the first place. After the disaster that was Josh Scobee, Pittsburgh held tryouts and signed Boz.

Who could that be? Most lists are going to be unimpressive. Half the league don’t even have two kickers in camp. But Tampa Bay’s Cairo Santos would be a name to watch. The Bucs drafted Matt Gay in the 5th round this year, giving him decent odds of making the team. Santos began his career with a successful few seasons with the Chiefs until injuries derailed things. He went 14/18 last season as a member of the Bucs and Rams. Cleveland’s Greg Joseph is another name to toss out.

But for the next few weeks, if Boswell can make his kicks and look like the same old kicker that netted him a long-term deal this time a year ago, even if that doesn’t guarantee regular season success, he’ll be the Steelers kicker when they travel to New England Week One.