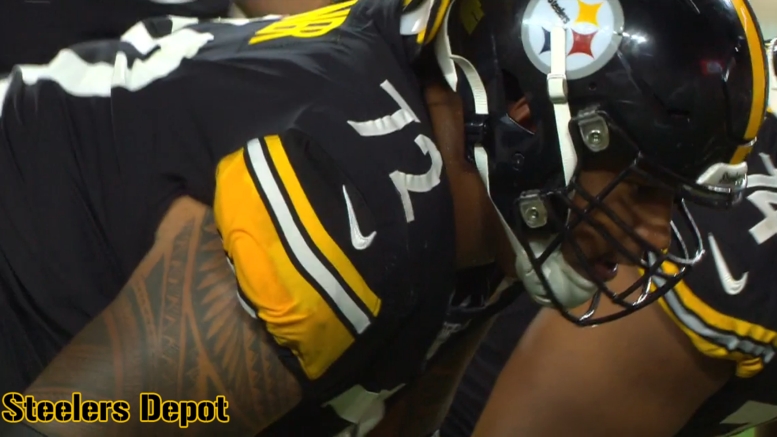 Topic Statement: Zach Banner, and not Chukwuma Okorafor, will be the swing tackle on Sundays.

Explanation: The Steelers used a third-round pick to draft Chukwuma Okorafor last year, the highest selection they have used on an offensive lineman since 2012. He performed at or above expectations as a rookie, but one could argue that Zach Banner has been the better tackle during this preseason.

Both Banner and Okorafor have played extensively. Both have played a lot at both left and right tackle. But only one of them has been used as a tackle-eligible so far this preseason, which is one of the responsibilities that the Steelers like to ask out of their swing tackle who dresses on Sundays.

In case you haven’t guessed, it’s been Banner. Now, granted, it’s only been six snaps, but that’s more than zero. And it’s not something you might think a big guy like Banner would be equipped to carry out, but perhaps that’s a tribute to his physical fitness and keeping his weight under control.

There is also the fact that he has simply played well. Sure, there have been a few blips here and there, but there always are. And to me, he has played equally well on both the left and the right side, while Okorafor seemed to struggle a bit more on the left.

When Matt Feiler was playing guard, it was Okorafor who started opposite Alejandro Villanueva in the second preseason game, not Banner. He didn’t enter the game until late in the second quarter in that game, with Okorafor still in at the same time. The latter left at halftime, Jerald Hawkins replacing him.

Okorafor was the one competing for the starting right tackle job, not Banner. The team knows the talent he has and the potential they’re working to get out of him, and the best way to get it out is to get him on the field. Even assuming that he had a slightly worse preseason (he has gotten better each game, as well), the team’s view on him has already been clear. And Banner got tackle-eligible work just to see if he could do it. They already know Okorafor can.