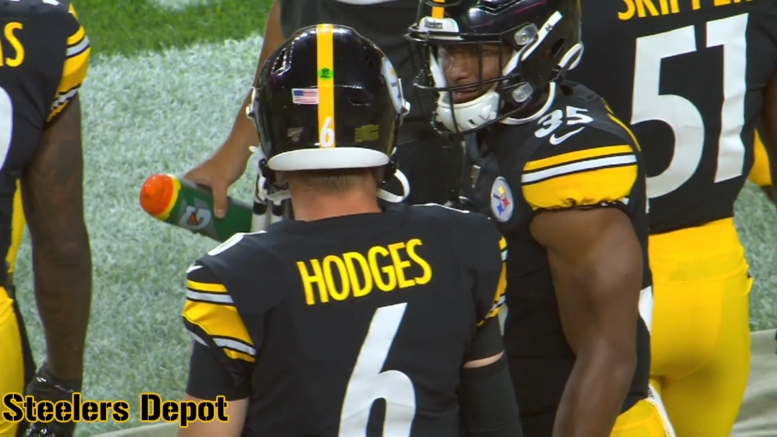 Topic Statement: Devlin Hodges has a strong chance of making the practice squad as the number four quarterback.

Explanation: The Steelers have extremely little history with keeping four quarterbacks in their system at any one time. I believe it’s only been done perhaps once or twice. A lot of teams keep a quarterback on the practice squad, but those tend to be the ones who only carry two on the 53-man roster. Hodges is drawing far more attention than the average ‘fourth arm’, however, which may encourage the team to keep him around.

Already, in one preseason game, Devlin Hodges has played about as many snaps during the preseason as the average fourth quarterback gets. And that was with the Steelers having a relatively low number of total offensive snaps. Mike Tomlin got him into Friday’s game with nearly 25 minutes left to play, and he didn’t disappoint with the work that he did get, though there is of course room for improvement.

The fact that Christian Scotland-Williamson can give them an 11th practice squad spot, while being a legitimate tight end candidate this year as well and not just a project, makes it more possible for the Steelers to do things with their practice squad that they don’t ordinarily do, such as keep a fourth quarterback. If he plays like he deserves it, there is a fair chance he will be rewarded.

The argument against keeping the fourth quarterback is always the same: he’s not going to get the sort of work to justify having him around. He may be seeing a decent number of reps in training camp, but the available balls greatly diminishes once you get into the regular season.

Even the third quarterback has a difficult time getting enough reps to grow through on-field work. Hodges, as a number four, would hardly get to throw the ball, and whoever the third quarterback is would be the one running the scout team as he tries to develop. With two young backups already, it doesn’t make much sense. His best chance of making the roster is by outperforming Joshua Dobbs and seeing Mason Rudolph take the backup role.