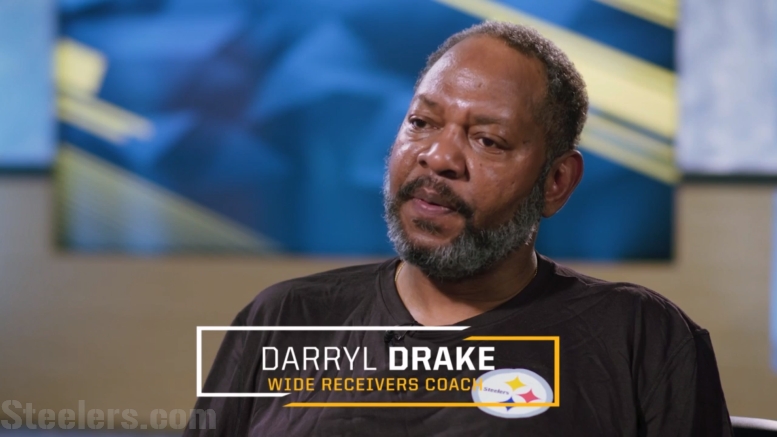 Among those who were closest to Darryl Drake in recent years were those who came to know him during his last long-term stop: the Arizona Cardinals, where he coached for five seasons prior to Bruce Arians’ retirement. That lined up perfectly with Pittsburgh Steelers wide receiver coach Richard Mann’s own retirement, which made it easy for Mike Tomlin to bring him into Pittsburgh.

Drake was heading into his second season with the Steelers when he passed away suddenly at the age of 62 yesterday morning. But before he did, he got the opportunity to catch up with some of those he knew in Arizona, who had followed along with Arians when he unretired and became the head coach of the Tampa Bay Buccaneers, Pittsburgh’s opponent for its preseason opener.

Arians was understandably emotional when talking about his good friend yesterday after hearing the news. “The world lost a great person”, he said in a press conference following practice when asked about his former wide receivers coach.

“It’s a great thing. We get two full practices against somebody else… and we don’t have to play our guys as much in the game because we’ll get so much good work together.”

“Not just a great coach, but a great person—great father, husband, grandfather”, he went on. “He was a father figure to a lot of players. He’s had some great players, but he was their dad. Just having spent all that time pre-game seeing him and to think that he’s gone is just really hard to fathom. Prayers and condolences out to his family”.

Arians, who was in Pittsburgh for several years, also spoke to the Pittsburgh Post-Gazette about the loss, telling the paper that Drake was “one of the best of all time…one of the best teachers. He was a father figure to everyone in the room. He took care of them personally and professionally. He was one of the best human beings I know”.

Among those he coaches while in Arizona was none other than Pittsburgh legend Larry Fitzgerald, who also paid fitting tribute to Drake yesterday. “I’m heartbroken for anyone who had the privilege to know Darryl”, he began as he initiated a Tweet chain. “As a man, a coach, a husband, and a father, he was as good as they come”.

I’m heartbroken for anyone who had the privilege to know Darryl. As a man, a coach, a husband, and a father, he was as good as they come. pic.twitter.com/VEVmjdVGbL

It’s really quite remarkable to see how much of an impact he has had everywhere he has gone in the NFL, not just professionally, but personally as well, and I don’t think a higher compliment can be paid to somebody in the sport than to recognize him as exceptional in both areas.

His passing is going to leave a void, both personally and professionally, in Pittsburgh as well. Pretty much every single wide receiver on the roster paid tribute to him in some form or fashion, even though he had only joined the staff last season.