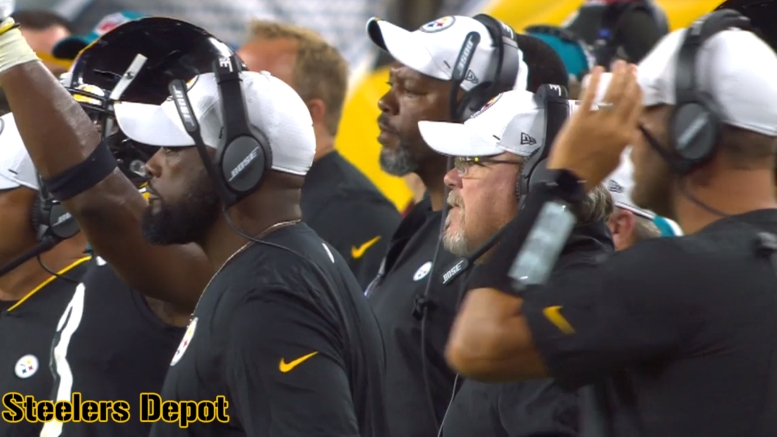 The Pittsburgh Steelers carried out their final days of practice at Saint Vincent College with literal clouds hanging overhead. Two of their final three practices were shortened by more than half an hour due to weather, including earlier today.

Many have noted it to be a fitting metaphor for the tenor of the organization right now as they continue to grief over the sudden passing of wide receiver coach Darryl Drake, who died in his sleep Sunday morning. He complained of chest pains the previous evening, but tests run at a local hospital found no abnormalities and he continued his coaching duties when he returned to Saint Vincent College after declining an overnight stay for observation.

Alejandro Villanueva was the first player yesterday to speak publicly about Drake’s passing, and he happened to mention that quarterback Ben Roethlisberger in particular had a close relationship with him. Roethlisberger himself spoke about that earlier today following today’s practice, an interview snippet captured by Missi Matthews:

I only knew him for a year and a half, but I think in that year and a half, he meant more to me than some people that I’ve known for my whole life. I know he was an amazing football coach, but he was an even better man, better husband, better father, and a better man of God than he was a football coach. What he brought to this team and to me and our relationship together was truly something that could never be replicated. He will be very dearly missed, but we know that he’s with us, and we know he’s in a better place.

.@_BigBen7 with some very powerful words on what Coach Drake meant to him. #SteelersCamp pic.twitter.com/eVVjU60fsD

There were additional follow-up questions, captured by Joe Rutter of the Pittsburgh Tribune-Review, Roethlisberger first asked about whether or not there was anything that stood out to him. He said that Drake’s saying for this offseason had been ‘Shut Out the Noise’, and you can see that message taped to the wall in the group photo that Ryan Switzer posted in memorializing his coach. Switzer also spoke about what Drake meant to him earlier today.

As the veteran leader of the team, Roethlisberger also told reporters that he felt his role in helping his team work through this process was to try to be the best communicator he can be and to listen. “I think so many times we’re caught trying to talk and telling people it’ll be okay, but grief isn’t about being okay. It’s about grieving and talking and communicating”, he said.

This is certainly not the first instance in history, even on a football team, in which a group has to suddenly work through tragedy. Just last year, the Minnesota Vikings lost Tony Sparano in July. But there can never be a template for losing a loved one, something I’m sure all who have experienced that set of emotions understands.