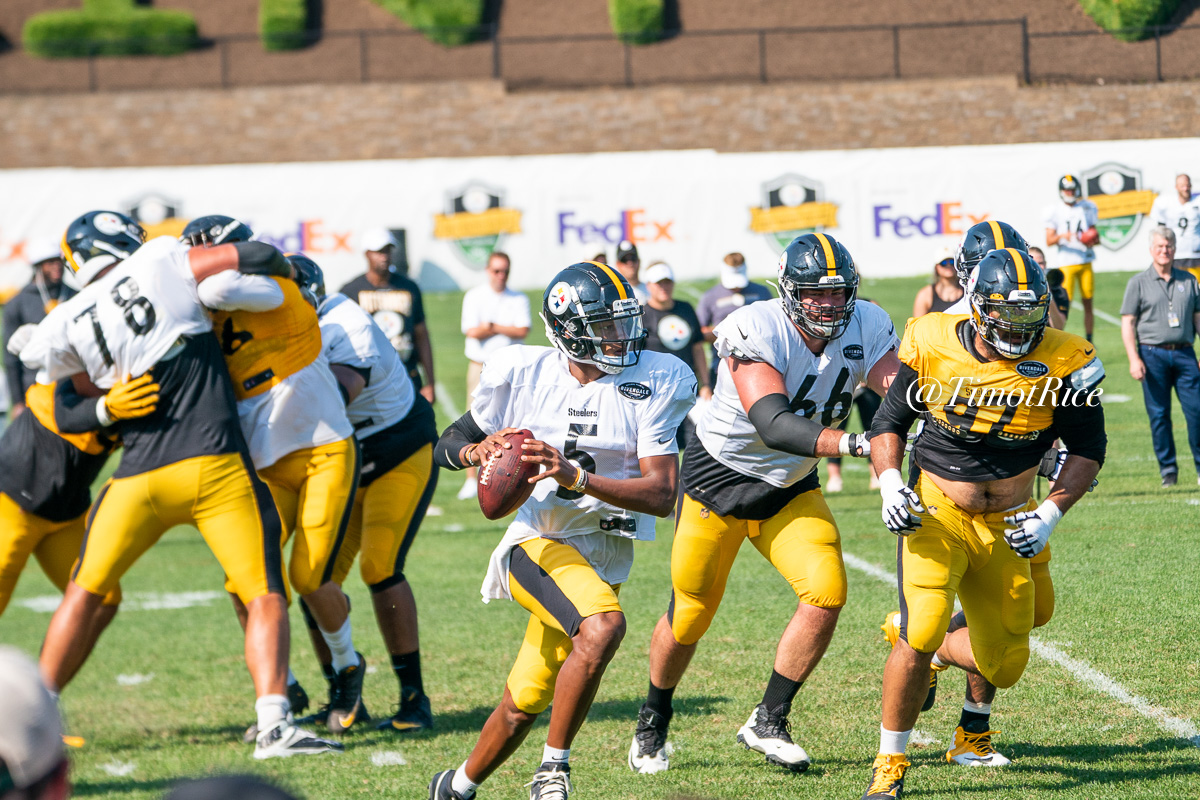 Longest stretch of camp is about to come to a close. Nine practices in ten days, concluding with tonight’s session at Heinz Field for Family Fest. The team should be in pads, highlighted by the rough and tumble goal line drill. Let’s talk about what to watch for.

– Before we even get into position groups, across the board, let’s see what players are able to sprint across the finish line and which ones stumble across it. This has been a grind. Physical. Everyone’s fatigued, physically and mentally, and their bodies are beat up. But those who can’t succeed now won’t succeed at the end of a game, season, or playoff run. Those guys aren’t going to help you. So they’re under the microscope today.

– Who is going to be consistent from this group? Aside from Ben Roethlisberger of course, who, if he doesn’t practice day, should send off some alarm bells. Held out the last two days. I believe Mike Tomlin when he says it’s all been planned but tomorrow will give us our answer. Josh Dobbs a little better the last few days, Mason Rudolph a little worse. I get these aren’t eight year veterans but they have experience under their belt. Neither have been good enough. Devlin Hodges, partially because the bar is always set so low for the #4, has been impressive. He’ll have to make the most of his practice reps because getting work during the game is still going to be tough. He’ll likely have to wait until the preseason finale to get meaningful snaps (i.e. more than a drive to close out a game).

– Jaylen Samuels has been pretty quiet so far. Hasn’t been terrible, still clearly the #2, but hopefully he gets some burn in the run sessions. Would be nice to see him bust off one long run. We’re still talking about a second year player who played about a quarter last year. This isn’t an established vet.

Still seeing lots of Pony/2 back looks, I’ll tally those up at some point, and expect to see it continue throughout camp. Maybe less so in the preseason because it’s only when Samuels is on the field and he probably won’t see a ton of action in the opener. First two or three drives. James Conner, of course, will sit out.

– Things have gone a little quiet for the running backs. Focusing in on Mailk Williams, a talented runner with better burst and change of direction ability than you’d expect from a man of his size, but with a fairly limited skillset as a receiver/blocker, he’ll have to prove his worth as a runner. To be fair, Ralph Webb is rowing a similar boat and I think I like Williams better as a runner.

– Trey Edmunds, though having the advantage of being more known to the team with more special teams value, hasn’t been particularly impressive in any one area. He could use a big day before the first preseason game.

– Not much new to say about the group. Christian Scotland-Williamson is one of the hardest working Steelers and you can see it pay off. It is possible for him to make the 53 man roster and he is a better blocker than Zach Gentry, a good path to be on if you want to make the team.

– Hoping Johnny Holton can make a bit of noise now that he’s back in team drills, returning for yesterday’s practice. Obviously fallen a little behind missing all the padded practices but with injuries littering the group, there’s an opportunity for reps. His speed and coverage ability are his two best assets.

– Looking for more volume from Eli Rogers and more downfield ability by Ryan Switzer. But you probably already knew that.

– Is the group healthy? Thought it was strange to see Fred Johnson get 2nd team LT work yesterday. Chukwuma Okorafor was with the first team so it makes sense he wasn’t part of that group but Jerald Hawkins was on the sideline. Did he get hurt, is the team demoting him, or did they not trust him enough to run downfield for the no huddle plays? Whichever of the three is bad news. Even then, choosing Johnson, who never played there in college, is a weird choice. Something to monitor.

– Derwin Gray has been quiet the last couple practices after leaving one with heat related issues. These physical practices are a chance for him to shine and looking forward to him showing the bright moments he had early in camp. Definitely has a Ramon Foster-like skillset.

– Honestly feels like the group is relatively settled in, at least in terms of the starters. Daniel McCullers and Isaiah Buggs the last two with the four locks. Can a backup make noise? DT/DE Winston Craig has always intrigued me just enough to want to see more but snaps have been limited. Lavon Hooks is a run stuffer but doesn’t feel like anything more than that.

– Good group. Lot of different styles. Your power rushers like Ola Adeniyi and Tuzar Skipper, your speed guys like JT Jones, and technique rushers like Anthony Chickillo. Believe there are going to be tough cuts at the position. Don’t have a whole lot to add that I haven’t already written about.

– Where in the world is Mark Barron? Constantly in and out of the lineup. Missed yesterday’s practice. Don’t know what’s been up with him. Weird start.

– Ulysees Gilbert III pushing hard for a roster spot. Sutton Smith is far from locked in. Let’s see if Gilbert III can keep that streak going.

– Derrek Thomas has an interesting build. Long, lanky with ball skills and a long strider who can cover ground. Couple days with the team now, working his way into team sessions, let’s see if he can make an impact.

– Brian Allen’s first day was a good one. Unfortunately, it was his best one. Not that he’s been horrible but he’s still outside looking in with Artie Burns’ impressive play. At this point, Burns feels like a good shot of making this team as the #6 corner and probably getting the gameday helmet over say, Justin Layne.

– Sans one interception, Marcus Allen has had a pretty quiet start. Still believe he’s going to make the team, if only because the depth here is poor, but I want to hear him – literally – make noise in the run game. Cam Sutton playing dime dings him.