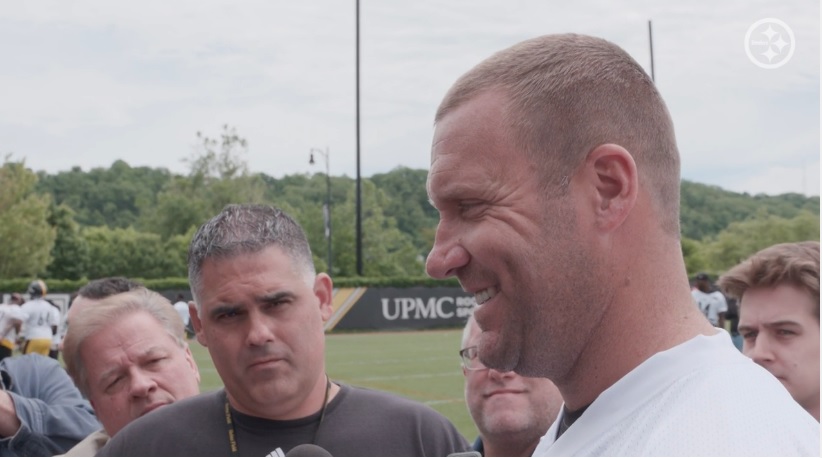 Pittsburgh Steelers quarterback Ben Roethlisberger was quick to dismiss any talk of training camp feeling different this time around, stating that it was too early in process to tell but he did allude to the fact that the turnover within the roster has brought in many different faces to Latrobe.

“It’s kinda too early to tell so far. You know, we just kinda got in and had meetings and had a little walkthrough so far. But it’s different, different people. You know, it’s always that way a little bit with turnover, new guys and guys leave. So really, it’s kind of to be determined yet cause I’m kind of excited to get on the field and do real football with these guys,” Roethlisberger told a group of reporters.

Ben Roethlisberger spoke about the new faces, the offense, what motivates him and his teammates and more before the first practice of #SteelersCamp. pic.twitter.com/cD9ZKSdM40

There has been no bigger turnover on the roster than at the wide receiver position as the team and Roethlisberger bid farewell to the talented Antonio Brown while welcoming in new additions such as Donte Moncrief and rookie Diontae Johnson.

This will be Roethlisberger’s first training camp without Brown since 2009, when Brown was still enrolled at Central Michigan. Since being drafted by the Steelers in 2010, Roethlisberger and Brown have formed an incredible, almost telepathic connection and the quarterback alludes that it will be different without Brown’s presence.

“Well, it’ll be different. I think the things that we did together were some things that no one’s really ever done. So, it’s going to be hard to make up for that but you know I’m gonna do my best to still bring my A game and I know we’ve got other guys on this team that are ready to step up and bring everything they can to the table,” says Roethlisberger.

While there will be a different vibe at training camp this season, perhaps a new approach will be needed to ensure the team heads on a different path than last season. The team missed the post season last season for the first time in five years and Roethlisberger is committed to not letting that happen again.

“You know we missed the playoffs last year, so we need to get back there and we need to be better.”

For any cultural change to be successful, it has to trickle from the top down. That begins with Roethlisberger and the quarterback knows that for the Steelers to reverse their misfortune it must begin and end with his play.

“Well I think I have to play better. I need to always start with myself and it starts with me with the ball in my hands. I need to make sure that I distribute the ball to guys and make sure that don’t turn the ball over,” says Roethlisberger.

While Roethlisberger led the NFL in passing last season, he also led the league in interceptions and much was made of the Steelers’ frequency in throwing the football. But whether the Steelers’ franchise quarterback throws 50 times or five times, he is only focused on steering the team back to another Super Bowl.

“I’ll do whatever it takes to win. I spoke to the offense last night about that. I don’t care, I’m the type of guy that you guys that have been around me and the guys on this field that had been around me know that I’d rather throw for five yards and win than 500 and lose. I’ll just take a win. So, whatever we need to do to win football games, make the playoffs and try and win a Superbowl, that’s what I’m up for,” Roethlisberger says.

The winds of change may be sweeping through Latrobe for this year’s training camp but it does not seem like the Steelers are overly worried and for good reason. The main goal for Roethlisberger is still to win another ring and perhaps the winds of change can guide a team that has not won a Lombardi Trophy in over a decade back to the Super Bowl.