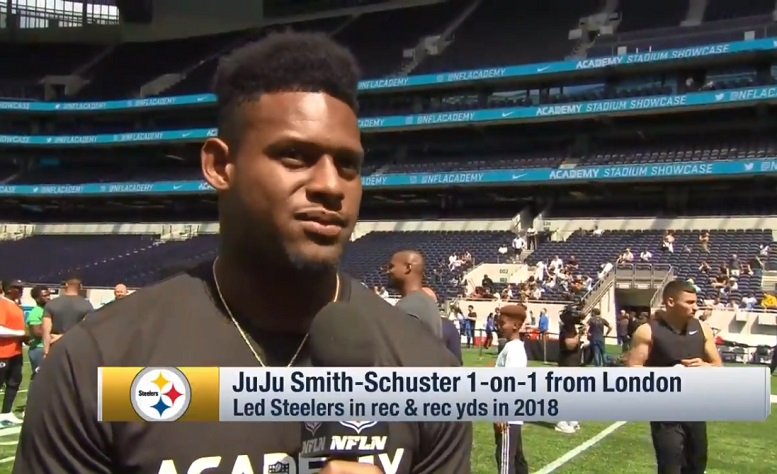 Is there any chance that Pittsburgh Steelers wide receiver JuJu Smith-Schuster winds up having a better 2019 season than his former teammate, wide receiver Antonio Brown, who is now with the Oakland Raiders? At least one former NFL wide receiver and current NFL analyst seems to think there’s a very good chance of that happening. In fact, he’s even predicting that to happen.

While in London this past week for the launch of the new NFL Academy, former NFL wide receiver Nate Burelson, who is now a morning analyst on the NFL Network, was asked during a short interview with Oddschecker to give his thoughts on Smith-Schuster and specifically how he thinks the third-year wide receiver will perform in 2019 without having Brown playing opposite him in the Pittsburgh offense. Burelson certainly didn’t beat around the bush with his answer.

Watch our EXCLUSIVE interview with @nateburleson as the nicest guy in football talks AB v JuJu, his best teammate and where he’d put his money for Super Bowl LIV 🏈 pic.twitter.com/RIoY9Hrd16

“I think JuJu‘s going to be incredible,” Burelson said. “I feel like JuJu’s going to have a better season than Antonio. I’m not saying that right now that JuJu is a better wideout, because he still has some growth to do, but he definitely has a better quarterback. And for me, if JuJu is really close to the talent and skill level of A.B. as a young wide receiver, what puts him over the top would be Big Ben, who is a Hall of Famer.”

While that’s a strong prediction on Burelson’s part, it’s not an overly outlandish one. After all, Steelers quarterback Ben Roethlisberger is indeed quite a better quarterback than the Raiders Derek Carr. Additionally, it’s hard to expect that Carr and Brown will have great chemistry right away during their first season playing together. While Brown should still be expected to have a strong first season in Oakland, it would be outlandish to bet that he wont hit last year’s totals of 104 receptions for 1,297 yards and 15 touchdowns.