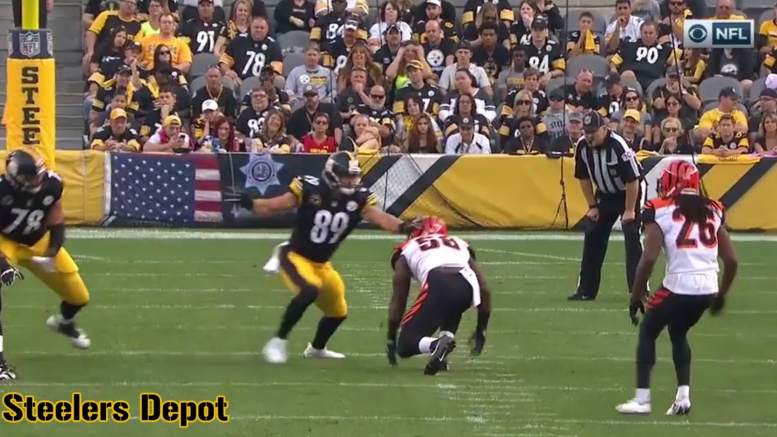 Being a great quarterback doesn’t mean that you’re particularly mobile. Some of the greatest quarterbacks in NFL history have the deer in a headlights look if you get them dead to rights as a pass rusher and have little ability to avoid it. They may have ways of avoiding pressure before it gets into the backfield, but in that one-on-one situation, they’re either chucking it or going down.

Cincinnati Bengals third-year defensive end Carl Lawson believes that Green Bay Packers quarterback Aaron Rodgers is a part of that group. And in his defense, Rodgers is the only quarterback, to date, that he has sacked more than ones. In fact, he brought him down three times (splitting one sack) in a game very early in his rookie season. Lawson has nine and a half sacks in his career (including three half-sacks for 11 total individual plays), so Rodgers makes up a good chunk of his sack history.

The young defensive end recently talked about this on Good Morning Football. The Cincinnati Enquirer provided the following transcript:

Honestly, I think it’s easier to sack Aaron Rodgers than most quarterbacks. He sits there, and he pats the ball. At the same time, sacking him don’t mean nothing if you don’t do it for four quarters. You know, he came back against us. … So, I mean, he’s an easier quarterback for me to sack personally, because he sits there and he probably gets eight to 10 yards in the pocket. He’s got a great left tackle (David Bakhtiari). So, he just sits there. He waits, he waits, getting that read. When he gets sacked, he doesn’t get flustered. I only saw him get frustrated maybe one time when I did sack him, which was the third and a half sack that they took off (negated by a penalty)

For the record, Lawson has yet to bring down Ben Roethlisberger of the Pittsburgh Steelers in three games played against him, though he has registered a hit on him twice. Sacking Roethlisberger has become harder and harder as his offensive line has improved and he has embraced checking the ball down after many years of doing exactly what Lawson said that Rodgers does.

Ultimately, it sounds as though he was crediting a quarterback’s unwillingness to give up on a play in making him easier to sack. When he was asked which quarterbacks were difficult to bring down, he said that it was the younger quarterbacks whose offensive coordinators like to protect them with quick reads, getting the ball out fast.

I think Daniel McCullers might agree that Rodgers actually isn’t that easy to bring down when you’re talking about that one-on-one situation. The Super Bowl XLV MVP does have mobility, though he was sacked an alarming 49 times in 2018.