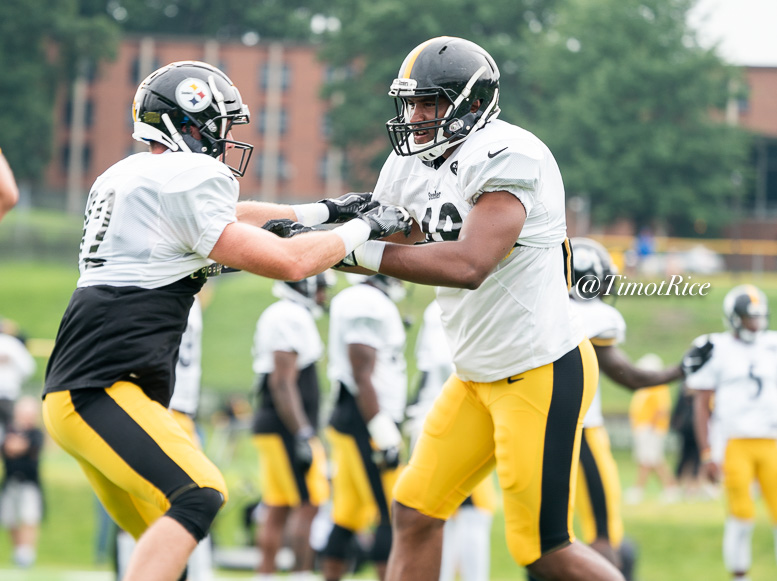 Continuing with the offense and looking at the tight ends.

Vance McDonald: You guys know the deal here. Just. Stay. Healthy. He does that and it’s an awesome camp. I don’t care if he drops every pass thrown his way in the process. Remember, if he gets through camp and the preseason, it’ll be his first one as a Steeler. In 2017, he wasn’t traded until right before the year and he was injured on the 4th day of practice last season. He didn’t play again until Week 2 of the regular season. So this camp is more important than the average veteran like him. More time to build a rapport with Ben Roethlisberger and a chance to hit the ground running, instead of getting there mid-season like he has been.

Xavier Grimble: Wow, what a big season for him. He enters the year firmly entrenched as the #2 tight end for the first time in his career. The talent is obviously there. Grimble looks good getting off the bus and he seems to work hard. But that’s been true of him every year and true of plenty of players around the league. Doesn’t always translate to on-field success and Grimble’s been in that camp.

For starters, he’s been someone prone to being unable to finish practices. Cramping, heat, something along those lines. That’s probably frustrating for him because hey, he seems to work hard and do the right things, but also frustrating for the coaching staff because that hurts earning trust. Can’t get through a practice? How will you get through a game? So that’s the baseline. Finish every practice as strong start to finish.

From there, I’m looking for consistency in his overall game. Making big plays as a receiver is nice, yes, but also avoiding drops and showing chemistry in scramble drills. He hasn’t been part of money of those with Roethlisberger. When he’s been in the game in heavy packages, it’s been to run block or some playaction where the ball is usually coming out quick. His run blocking has improved a lot the last two seasons so that aspect is taking a backseat but still something he needs to excel at.

Zach Gentry: Blank slate for him. If he makes the team, he’ll be the #3, used primarily in run blocking situations. How he handles leverage as a raw, tall tight end is at the top of my list. Should be fun to see him the first day on the sleds. Eye-opener for these guys who are young and haven’t practiced in six weeks.

They liked him as a receiver so you want to see at least some of those plays at least in practice. It’d be nice to see him pop in the red zone during the 7 shots period and catch a few touchdowns. Win some jump ball situations and finish his catches. Jesse James’ struggles there a few years ago, in part, led to the team trading for McDonald. If the backups struggle again, the front office may make a similar move.

Christian Scotland-Williamson: Putting him next because I’ll probably get a lot of questions of him. Said it before, will say it again. You’ll get a feel right away, first four practices, if there’s serious progression from year one to year two. You should expect a serious jump after spending an entire year with the Steelers but sometimes, guys just don’t make it. I could spend all of 2019 with the team. Still never going to make it in the NFL.

Want to see this guy to make some splash. Hardly caught anything last year, practice or regular season (three catches in 15 camp practices, that was it), and was just an afterthought despite never missing a practice. He’s gotta make some noise.

Kevin Rader: He does have a bit of a run-blocking background playing at Youngstown State, an offense that primarily kept things on the ground.  He also spent last season with the Green Bay Packers, giving him a bit of NFL experience. This camp won’t be his first rodeo. Maybe he can become the next Jake McGee? Unlikely to get him on the 53 man roster, though with questionable depth, I suppose better odds than most other seasons, but he could carve out a role on the practice squad/scout team.

Trevor Wood: Bit of an interesting spot. Tight end/long snapper out of Texas A&M (by way of Arizona). He considers himself a tight end first, second, and third, and a long snapper in emergencies only. I wouldn’t expect him to get any action at LS unless Kameron Canaday gets hurt mid-game. Wood may log some snaps there in practice but you don’t want a rookie, part-time snapper with so much riding on Chris Boswell’s preseason.

Honestly, I don’t know much about his game as a tight end because he was underutilized. He’s moved around throughout his college career, both in position (played some defensive line at Arizona) and in schools. Coming to the NFL is an adjustment but I guess it can’t hurt he’s been with a new place, transferring to A&M, and making that adjustment. Still, hard to see him finding his way on the roster or practice squad.