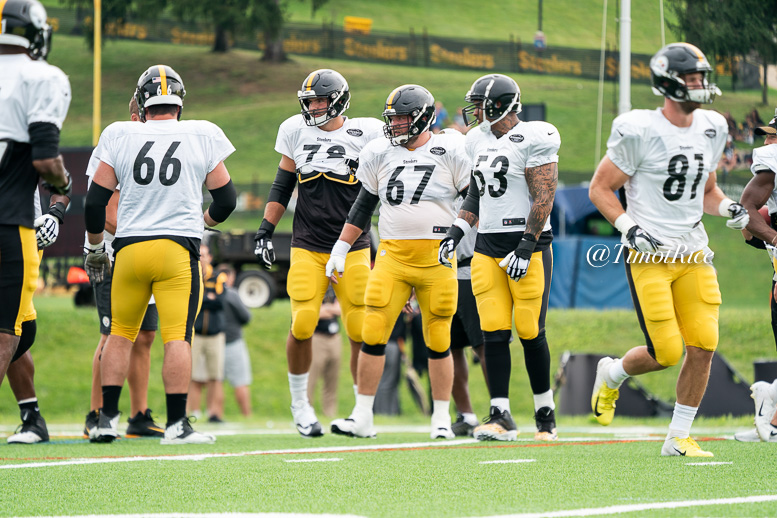 Let’s round out the offense with the entire line.

Ramon Foster: No more injury scares. Please please please. Obviously, what happened last year wasn’t his fault – it was no one’s fault – but in the moment, absolutely terrifying. As one of the oldest players in the locker room with nothing left to prove, other than Father Time has yet to best him, it’s about managing his reps and not overworking him early in the season. At this point, I may hold him out entirely of the one-on-one OL/DL drills just as the team has done with Maurkice Pouncey. Cam Heyward could use a new sparring partner anyway.

David DeCastro: Similar story with DeCastro though we’re talking about a younger guy, one still in the prime of his career. He has literally nothing left to prove and he’s done well off the field to become a leader and perhaps a more vocal presence, too. Just get through August healthy, big fella.

Maurkice Pouncey: Another established starter with nothing he’s gotta show. Camp is fun for the Pouncey vs Ben field goal challenge to kick off every practice. That’s probably the only thing I’ll end up noting about his camp. Again, managing reps with him is smart. He’ll turn 30 one day before the team reports, centers don’t last super long in the league, and though his play never dropped off following his severe knee/leg injury, I’m sure there’s long-term consequences.

BJ Finney: Despite playing well in-game, Finney doesn’t always have the greatest camps. Maybe the defensive line just knows his tricks and ways to overcome size/athleticism limitations but I haven’t come away feeling too good about his performance the last two treks to St. Vincent College.

Here’s part what I wrote about him last August.

“But he can get overpowered at the point of attack and doesn’t have the size of Ramon Foster or even Matt Feiler, making him easier to beat in pass protection. So not a great camp but the important thing to remind yourself is that when it counts, Finney plays at an above average level.”

I think his lack of size becomes a real issue in these situations. And there’s not a whole lot that can be done about that. But I’m looking for better anchor and lateral mobility to seal defenders when he does get beat. Still, his spot is safe as the top backup along the interior though if Matt Feiler loses the RT job, could he backup DeCastro at RG? At least worth mentioning.

Fred Johnson: The most notable name I saw when the Steelers initially unveiled their list of UDFAs. That doesn’t mean a whole lot once camp begins but it makes him a name worth watching. He could be running 2nd team which will mean more reps than if you’re stuck with the 3’s. He has a combination of size, length, and mobility. At guard, he’ll be asked to pull and play in space so I want to see him play with technique while playing fast and on the move. He could also dabble at RT though with the logjam there, it may take an injury or someone getting a day off. His ceiling is sorta like a more athletic Feiler so I’m interested in checking him out.

Garrett Brumfield: A fellow UDFA, Brumfield was a highly touted prospect out of college who could’ve gone anywhere. He chose LSU where injuries hampered his career, including a knee problem as a senior. It caused him to fall out of the draft before choosing Pittsburgh. Though undersized, he looks more like Finney than he does Foster, he has a nasty attitude and run blocking demeanor that I expect to see on display at Latrobe. For his sake, it better be.

Although they play different spots, there’s a little Hawkins feel to him. Remember, Jerald Hawkins had a foot injury his last year at LSU but when he was healthy and in camp, he looked great (before going down with a shoulder injury). Assuming he’s healthy now, I think Brumfield could shine.

Patrick Morris: I pegged Morris as a sleeper last season. But gotta admit, he was a bit of a disappointment. To his credit, he stuck around on the practice squad all year but his rookie preseason tape wasn’t super impressive. Thought he would show more strength and mobility like he was billed to have out of TCU, once labeled as one of college football’s “freaks” for that combination (his three cone time was better than Bud Dupree and his short shuttle almost the same as James Washington). So looking for more strength and maybe just less of a “deer in the headlights” that comes with some rookies. That’s hard to say from my outsider point of view, of course.

J.C. Hassenauer: Hassenauer received minor buzz this spring for reportedly working with the second-team offensive line. Like I said before, huge difference between 2nd and 3rd team reps. With the 2’s, you might get 25-30 team reps in practice. With the 3’s, you might be down to 10-15. And all these chances are critical for guys trying to hang onto the roster.

As a center, it starts with the snap. Clean exchanges in the gun and in the I. Coaches, rightfully, hate wasted plays in practice. They don’t get to make them up. So a botched play wastes a rep and is a good way to find yourself on the sidelines.