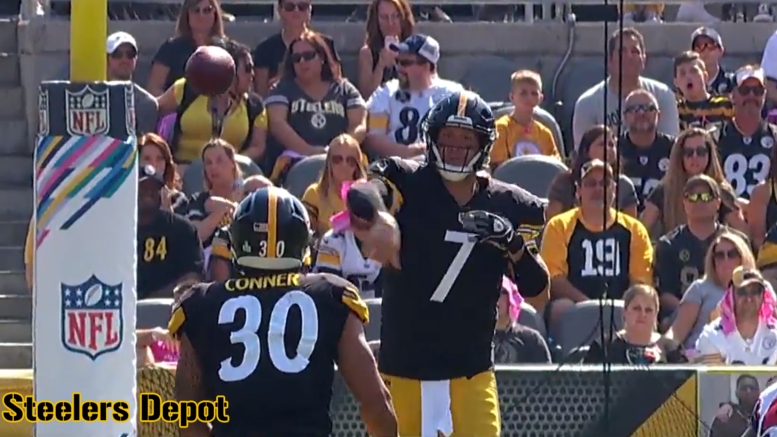 Do you hear that sound? That’s the sound of the train that is the National Football League rolling right along, pushing us closer and closer to the start of the 2019 season.

Now that we’re into the month of June, it’s time for me to start up my Ranking the Room: AFC North series, where I take a deep dive into each position group for all four teams in the division and rank them from best to worst.

Today, I’ll take a look at quarterbacks in the AFC North.

This really shouldn’t be any surprise when it comes to the pecking order in the AFC North under center.

I may have questioned Ben Roethlisberger and his leadership and captain tactics when it comes to calling out others, but I’ll never question Roethlisberger’s skillset and production.

Despite nearing age 40, Roethlisberger is playing some of the best football of his life, at least in terms of the yardage and touchdowns he’s rolling up in the Steel City. I’d love to see Big Ben cut down on his turnovers, which would take some of the burden off of the defense’s shoulders, but overall there’s so much positive to outweigh the negative when it comes to him.

Enjoy these next three years because we’ll never see a Big Ben-type again.

Behind Roethlisberger, external expectations are high on 2018 third-round draft pick Mason Rudolph, who needs to beat out Joshua Dobbs for the backup job this year to make sure that draft pick doesn’t trend towards being a massive waste.

Rudolph has the tools to be a solid backup in the league for the next 3 years on the cheap behind Roethlisberger, but it all comes down to putting it together. Having a full season under his belt should help immensely.

Dobbs flashed at times in relief of Roethlisberger, highlighted by that massive 20-yard completion in Baltimore to pick up a key first down to JuJu Smith-Schuster, but at other times – such as in Oakland – he looked lost. The situation behind Roethlisberger isn’t ideal, but it’s a lot better than some of the other rooms within the division.

Don’t count on Devlin Hodges being much of anything for the Steelers moving forward either.

Baker Mayfield is possibly the next face of the league for the next 5 years, so it’s only right he has the Browns staying in the No. 2 hole for the second straight season. Once Roethlisberger walks away from Pittsburgh, Mayfield should bump the Browns up to the top spot, barring injury.

Mayfield was a massive shot in the arm for the Browns last season and looks like the real deal. Now that defensive coordinators have nearly a full season of film to work with when it comes to scheming to slow him down, it will be interest to see how the former No. 1 overall pick adjusts. I’m betting he’s an MVP candidate in 2019, considering the weapons around him now, and the open system under first-year head coach Freddie Kitchens and offensive coordinator Todd Monken.

Behind Mayfield, the Browns have Drew Stanton back in the fold, giving Cleveland one of the best journeyman backups in the league. No matter where Stanton goes, he provides stability when he’s asked to fill in for the starting quarterback due to injury. That’s a good veteran to have behind such a young QB in Mayfield.

Aside from that, the Browns don’t have much depth. General manager John Dorsey is opening the won’t need the depth there due to Mayfield and Stanton, but Garrett Gilbert and David Blough don’t provide much comfort or stability at the No. 3 position.

The changing of the guard from Joe Flacco to Lamar Jackson technically happened last season due to injury, but the Ravens made it official this off-season, shipping Flacco to the Denver Broncos for draft picks, handing the keys to the car to Jackson after a division title and a playoff berth.

Sure, Baltimore’s offense was gimmicky last season under Jackson, but a lot of that was out of necessity. It’s not like Jackson had a good wide receiver group to work with. They needed to run the read-option to let him get comfortable and also use the most dangerous weapon within the offense at the time – his legs.

Now that the Ravens went out and got him some weapons at running back and wide receiver to work with, I think we’ll see offensive coordinator Greg Roman really open up the playbook and let Jackson air it out a bit more.

I’ve read a lot of takes that Jackson simply can’t throw and won’t be a factor as a passer and that couldn’t be further from the truth. Has he shown that in the NFL yet? Not entirely. But he didn’t throw for nearly 10,000 yards and 70 touchdowns in college in a pro-style offense by fluke.

Behind Jackson, the Ravens have Robert Griffin III and seventh-round pick Trace McSorley, both of whom are ideal fits behind Jackson in Baltimore’s new-look offense.

RGIII can come in to spell Jackson, but shouldn’t be counted on to carry the load if Jackson goes down with an injury. The Ravens hope McSorley can be their Taysom Hill, but I’ve said from the get-go that he’s the ideal backup for Jackson. They’re similar players and have similar skillsets. That’s what you want in a backup.

A few years ago, I had the Bengals as the No. 2 QB room in the AFC North with Andy Dalton at the height of his game and AJ McCarron as a solid backup.

Now? Well, Dalton has fallen off quite a bit thanks to the Bengals letting good talent around him get away, while the new backup is Jeff Driskel, who was below average in relief of an injured Dalton last season.

The hope is that Ryan Findley, a fourth-round draft pick that the Bengals traded up for in the 2019 draft, is the answer long-term. That’s being a bit overzealous, in my opinion.

Dalton could get back to his 2015 form with a healthy AJ Green and Tyler Boyd, and breakout by John Ross or Stanley Morgan Jr., but he’s clearly not who he once was four years ago.

With Driskel, he’s a nice two-way option as a backup and gave the Bengals some decent snaps last season, but he’s not a long-term backup option. Findley could beat him out this year, but ideally Zac Taylor should want Findley to sit out the entire year and learn the mental side of being a pro.

Overall though, the Bengals quarterback room is a bit behind the rest of the teams in the division and it doesn’t look like it will get better anytime soon.