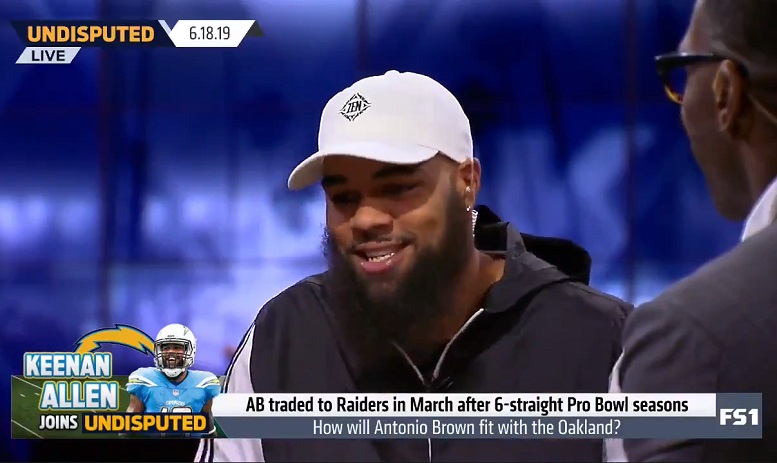 Pittsburgh Steelers third-year wide receiver JuJu Smith-Schuster is expected to be the team’s No. 1 receiving option in 2019 now that wide receiver Antonio Brown is no longer part of the team. While Smith-Schuster did have a fantastic 2018 season, it will now be interesting to see if he can duplicate it in 2019 now that he’s the Steelers player that will receive most of the extra attention from opposing defenses with Brown gone.

During a Tuesday morning interview with Skip Bayless and Shannon Sharpe on ‘Undisputed’, Los Angeles Chargers wide receiver Keenan Allen was first asked if he thinks the Steelers will miss Brown this season.

“Oh, for sure,” Allen said. “Somebody with that talent, yes, no doubt.”

Allen was then asked to give his thoughts on what he believes Smith-Schuster is in for in 2019 with him no longer playing opposite Brown and thus having to become the No. 1 wide receiver in the offense.

At the start of the Steelers offseason practices in late May, Smith-Schuster talked openly about the challenges he’ll face this season now that he’ll be the team’s No. 1 wide receiver.

“No doubt,” Smith-Schuster said. “We saw it playing against the Patriots, they doubled me and A.B. It’s nothing new. This year it will be the same thing. I’m going to be getting the same coverage, the doubles. We have guys like [Donte] Moncrief, James [Washington], all these guys. We have so many guys who can make plays. I’m not worried about that.”

Steelers quarterback Ben Roethlisberger also talked about the challenges that Smith-Schuster faces this upcoming season upon his arrival to OTAs at the end of May.

“Now, he’s [Smith-Schuster] got another challenge ahead of him, not just by defenders and his reputation of being good football player, but by trying to fill shoes and be a No. 1,” Roethlisberger said when asked if he thinks Smith-Schuster can take over the role as the team’s No. 1 wide receiver moving forward. “And I’ve talked to him a lot, I’ve been around him a lot this offseason and I think he’s up for the challenge and he’s excited and he’s working his butt off to be that guy.”

Last season, Smith-Schuster registered a team-high 111 receptions for a team-high 1,426 yards. Allen, on the other hand, registered 97 receptions for 1,196 yards last season. Allen, however, has been the Chargers No. 1 wide receiver for several seasons now while Smith-Schuster’s first two seasons in the NFL were spent with him being the No. 2 wide receiver in Pittsburgh behind Brown. In short, if Smith-Schuster is able to register another 100-catch season in 2019, it will be a huge accomplishment for him and signify that he adjusted quite well to the extra attention he had received throughout the season.

Smith-Schuster has already experienced some what it’s like to play in a game without Brown opposite him, however. In last year’s regular season finale against the Cincinnati Bengals, Smith-Schuster registered 5 receptions for 37 yards and a touchdown with Brown sitting that contest out. Brown also sat out the Steelers final two 2017 regular season games with an injury and Smith-Schuster registered a combined 15 receptions for 218 yards and 2 touchdowns in those two contests.

“But it’s going to get better for him because he’s just gonna learn and he’s just gonna get more and more experience,” Allen said in regard to Smith-Schuster’s upcoming season.