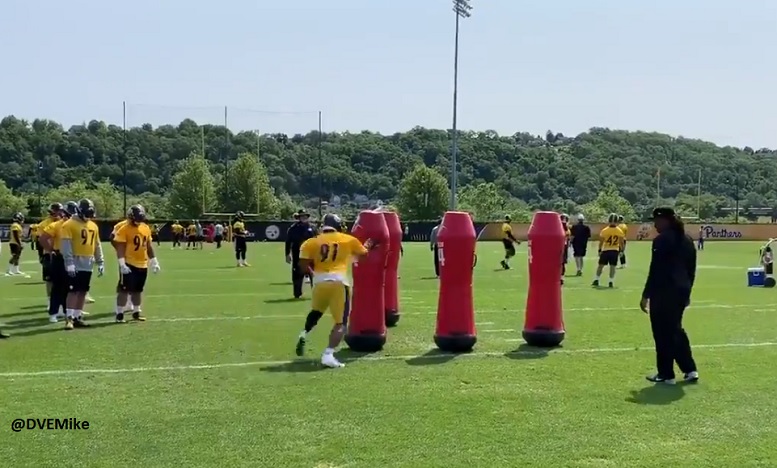 The Pittsburgh Steelers third week of 2019 OTA practices got off to a very encouraging start on Tuesday as two defensive starters, who have apparently missed the first two weeks with minor injuries, were back working in some capacity. We’ve already passed along the report of Steelers safety Sean Davis being able to participate in practice on Tuesday and in this post we’ll highlight defensive end Stephon Tuitt finally participating in OTA practices.

Tuitt, as you can see in the video below from Mike Prisuta of steelers.com, received a friendly ribbing from his defensive teammates when going through a drill during Tuesday’s practice. He was asked after practice how that friendly ribbing and interaction was received on his end.

Stephon Tuitt worked individual drills for the first time at OTAs. His buddies on the DL provided the critiques. pic.twitter.com/xanE24rmlb

“Oh, I loved the interaction, Tuitt said, per the team’s official website. “I love my guys. It’s always great to be back out here, like I said, to get a chance to play as a team and just get a chance to pursue something.”

.@DOCnation_7 talks about being back out on the field, what he is working on to improve this year and more. pic.twitter.com/tc9rLWK3vO

Tuitt, who turned 26 years of age just a few weeks ago, also just recently married his longtime girlfriend. The Steelers former second-round draft pick out of Notre Dame registered 45 total tackles last season in the 14 games that he played and that included him being credited with 5.5 sacks. Tuitt. who now has 20 sacks for his NFL career, said Tuesday he has made finishing better in 2019 his primary offseason goal.

Tuitt also made it clear on Tuesday during his talk with the media that his defensive teammates also need to finish better in 2019.

“I think overall we just got to finish better and once we finish better, we’re going to be really great,” Tuitt said.

So, whats going to allow the team to finish better in 2019?

“Having everybody just finishing in practice,” Tuitt said. “Practicing. Defensive line finishing the sack. DBs getting the interception, finishing the play. Getting more turnovers, getting the fumbles. We’ve just got to do a little more of that and we’ll be all right.”

Will Tuitt be able to practice fully next week when the team holds their annual mandatory minicamp? It’s hard to know for sure right now but it certainly sounds like that might be his goal.

“It’s keeping the body healthy and making sure we are going into minicamp with healthy bodies,” Tuitt said Tuesday, according to Joe Rutter of the Pittsburgh Tribune-Review.

Tuitt missed two games last season with a hyper-extended elbow and he missed four games in total during the 2017 regular season due to back and bicep injuries. It would be interesting to see what kind of season Tuitt can ultimately have in 2019 if he”s able to stay fully healthy and thus can play in all 16 games. Maybe this is the year we’ll find out.

“More consistent and more finishing,” Tuitt said Tuesday he expects out of himself in 2019.