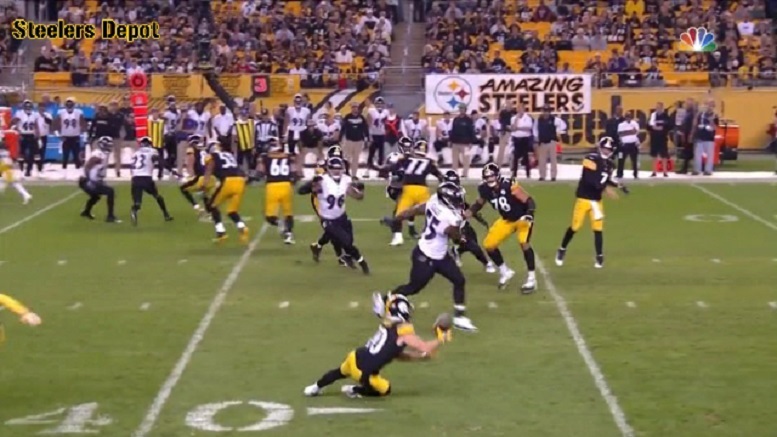 Did the Pittsburgh Steelers really run too many wide receiver screens last season in third and short situations?According to a tweet on May 6 by Aaron Schatz of Football Outsiders, they did and you can see his semi-specific thoughts on why in that social media post below. However, ever since Schatz posted that tweet, it’s been bothering me quite a bit and I finally found time on Wednesday morning to research his claim thoroughly.

More strategic tendencies: 8 times last year, the #Steelers ran a WR screen on third-and-3 or less. Three of those passes LOST yardage. A fourth got 0 yards. Take the third down WR screen behind the barn and kill it with an axe.

While Schatz’s tweet seems pretty specific in nature, when one conjures up thoughts about a wide receiver screen, one quickly assumes a quick pass to a wide receiver out wide to either side of the field. For the life of me, I couldn’t remember such traditional wide receiver screens being run by the Steelers last season on third and short situations and come to find out, they weren’t all exactly of that type.

While Schatz didn’t give a full list of each of the third and short plays in question, they weren’t too terribly hard to find in our offensive game charting from last season and especially if each play he was referencing was indeed a wide receiver catching a pass on third and 3 or less and the ball not traveling past the original line of scrimmage.

Once again, I’m not exactly sure that the eight plays that Schatz referenced are eight plays identified, but it’s hard to think that they’re not. With that, let’s look at those eight plays I assume Schatz was referencing.

Against the Kansas City in week 2 is the first time we saw the Steelers offense run a wide receiver screen on third down with 3 or less yards to go and it was quite easy to identify. On this quick traditional wide receiver screen to Antonio Brown, he broke a tackle attempt and gained 6 yards to move the chains.

Later in that Week 2 game against the Chiefs we witnessed the Steelers running that quick inside shovel pass to wide receiver JuJu Smith-Schuster that we saw ran a few successful times during his rookie season. While it was snuffed out quickly by the Chiefs defense in this instance, it still resulted in a first down.

Later in that week 2 game against the Chiefs the Steelers offense went back to that quick inside shovel pass to Smith-Schuster on a third and goal play from the Kansas City 1-yard-line. This time, however, the Chiefs managed to snuff it out even quicker and Smith-Schuster lost 2 yards on the play. Not that it matters, but Steelers quarterback Ben Roethlisberger was able to score on 3-yard scramble on the ensuing fourth down play.

In Week 4 against the Baltimore Ravens, the Steelers ran another traditional wide receiver screen on third and 3 only this time to Ryan Switzer. However, great recognition by Baltimore outside linebacker Terrell Suggs resulted in Roethlisberger needing to throw the football off target and while Switzer was able to ultimately catch the football, he had to dive backwards to do so and was easily tackled for a loss of 5 yards.

In the Steelers week 9 game against the Ravens was the next third and short wide receiver screen I believe Schatz was referencing in his tweet. This completed pass to Switzer was caught right at the original line of scrimmage and Switzer was able to turn up the field with the football to gain 5 yards and thus move the chains.

Against the Carolina Panthers in Week 10, the Steelers once again ran that quick shovel pass to Smith-Schuster and this time with good success as he was able to gain 9 yards.

Late in the first half of the Steelers Week 12 game against the Denver Broncos, the Steelers offense once again ran the inside shovel pass to Smith-Schuster and this time it was on a third and goal play from the 2-yard-line. Much like the earlier play in Week 2 against the Chiefs, the Broncos defense snuffed it out and Smith-Schuster was tackled for no gain. For whatever it’s worth, the fourth down play was the fake field goal that resulted in a touchdown pass from kicker Chris Boswell to tackle Alejandro Villanueva.

Finally, in what I believe is the eighth and final wide receiver screen play on third and short that Schatz was referencing, we saw Brown cut down for a loss of 1 yard in the first quarter of the game against the New Orleans Saints. It was a play somewhat similar to the one that Switzer had in Week 9 against the Ravens.

Summation: As you can see in these eight total plays I reviewed, the Steelers did indeed lose yardage on three of them and had another one go for no gain. Two of those plays were the quick inside shovel passes to Smith-Schuster with one other being a traditional wide receiver screen to Switzer. The other one was a the quick speed out to Brown. While four of the 8 plays were unsuccessful, four resulted in first downs. If anything, the Steelers offense might be a little more judicious when it comes to running the shovel pass play to Smith-Schuster on third down and goal-to-go moving forward. Context, as they say, is everything, and thus it would have been more helpful had Schatz not necessarily identified his findings as being traditional wide receiver screens. Should they really cut out these kind of plays and take them behind the barn and kill them with an ax?